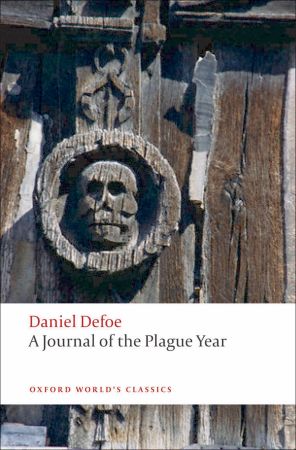 Purporting to be an eye-witness account, A Journal of the Plague Year by Daniel Defoe is a record of the devastation wrought by the Great Plague of 1665 on the city of London. Below is a short excerpt from our new edition’s Introduction, by David Roberts, which looks at Defoe’s developing fascination with the plague.

Defoe’s interest in the subject knew no bounds; natural disaster was for him a favourite ground on which to explore questions of faith and history. In The Storm (1704) he had described the devastation wrought by extreme weather the previous year and the book was in many ways an early dress rehearsal for the Journal, assembling ‘the most Remarkable Casualties and Disasters’ that arose from a single, terrifying event. Defoe’s preface presents The Storm as a higher form of sermon capable of reaching more people and needing to exercise stricter standards in its use of evidence: ‘among such an infinite variety of Circumstances, to keep exactly within the bounds of Truth’ was its principal challenge. Like the Journal, The Storm presents and attempts to reconcile the different ways in which natural science and religion might be used to explain mass death and destruction, contemplating the point where ‘the philosopher ends’ and ‘the Christian begins’. It defines that point as ‘the vast open field of infinite power’ which might reveal even to a confirmed atheist ‘some Cause to doubt whether he was not in the Wrong, and a little apprehend the Possibility of a Supreme Being, when he felt the terrible Blasts of this Tempest’.

Defoe started writing about the plague in 1709, when his primary concern was the danger of infection from the Continent. Six numbers of his Review in the autumn of 1709 had warned of the health risks of British troops assisting Sweden in the wars of the Second Coalition against Moscow and her allies, among whom the Prussians and Poles were in the grip of a severe epidemic. Protestant Sweden was a natural friend, and it is a sign of how plague occupied Defoe’s imagination that he should have highlighted it as a major factor in British foreign policy. In August 1712 he had documented recent outbreaks of the disease in Europe, attracting ridicule for his ‘Melancholy Notions’, and stung into brandishing the grisly item he would deploy throughout the Journal: a 1665 Bill of Mortality, in this case for the week beginning 12 September, the worst of the epidemic. Not content, he returned to the subject later in the month. For eight years interest subsided before, in July 1720, everyone else started talking about it. Writing to the editor of the London Journal in 1722, Defoe was content with understatement: ‘I cannot think that a Dissertation upon the Plague… can be very foreign to the Province of a News-Monger.’

Resisting intense commercial pressure, Walpole’s government has drafted an Act of Quarantine to keep out vessels suspected of carrying the disease. An author in the government’s pay believed to be Defoe rose vigorously to the Act’s defence in a series of ten articles for the Daily Post, Mist’s Journal, and Applebee’s Journal, signing himself ‘Quarantine’. His Applebee piece dated 1 October 1720 is feverishly shocking, with reports from Marseilles of ‘dead Bodies lying in Heaps unbury’d, the Stench of which is unsufferable’, of mass starvation (in his 20 May contribution he had written of people eating ‘Leather, Starch, Soap’), of soldiers being murdered to be replaced ‘Troops of Thieves and Murderers, that range the infected Streets’, one of whom claimed to have killed more than a thousand people. Having let his readers’ imaginations run riot, ‘Quarantine’, like the narrator of the Journal, assumes the guise of the responsible official: ‘We do not assert this Part of the Story at all, but relate it as we find it.’

Opinion was duly swayed and the Act of Quarantine gained the royal assent on 12 February 1722. Four days earlier, Defoe had published his first major work on the plague, Due Preparations for the Plague, as well for the Soul as Body, and in the spring its blend of medicine and piety suffused the grand historical fiction that is A Journal of the Plague Year. If the Marseilles plague gave Defoe a publishing opportunity that had been simmering for years, it also spawned a wealth of new material for him to recycle or refute. For scientific information he consulted two books published in 1720: Richard Mead’s A Short Discourse Concerning Pestilential Contagion, and Loimologia, a translation from Nathaniel Hodges by John Quincy. He trawled through the collection of Bills of Mortality published in 1712 as London’s Dreadful Visitation, using his sources to take issue with false science and witness. Other events of 1721-2 left their imprint on the Journal – George I’s appeal in October 1721 for a new sense of industry and public welfare among merchants, the continuing ramifications of the South Sea Bubble crisis, even a move in April 1721 to root out ‘scandalous clubs and societies’ of blaspheming young drunks. But the book embodies a conflict of private gain and public-spiritedness, of opportunity and authority, which points to its author’s desire both to exploit and contain a crisis. Defoe makes his narrator, H.F., a man of divided loyalties, barely keeping in check a prurient interest in lives and places where, to use his own pun, he has no business.

How did the plague impact health regulation?