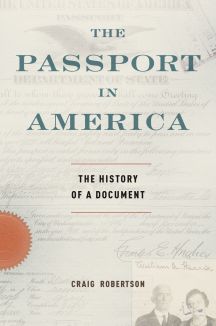 The Passport in America: The History of A Document

Craig Robertson is an Assistant Professor of Communication Studies at Northeastern University.  His new book, The Passport in America: The History of A Document, examines how “proof of identity” became so crucial in America.  Through addressing questions of identification and surveillance, the history of the passport is revealed.  In the excerpt below we learn about photographs on passports.

On 21 December 1914, Secretary of State William Jennings Bryan issued an order requiring two unmounted photographs no larger than three inches by three inches to be submitted with passport applications – one attached to the application, the second to be put on the passport.  Citizens who had been issued passports without photographs were required to have a photograph added.  Photographs were introduced to make the passport a more accurate identification document in a time of war.  The use of the passport in the name of national security also brought with it an increased concern to make the document more secure.  Less than a month after adding photographs to passports, the State Department acknowledged the need to more effectively ensure that the correct photograph was connected to the correct document.  When applications were submitted to local courthouses, clerks were now requested to affix photographs to the application with a seal to avoid subsequent substitution of the photograph prior to the issuance of a passport.  In Washington and at embassies around the world, officials stamped their seal of their office over the top left corner of the photograph when they attached it to the passport instead of the initial practice of simply pasting it to the document.  In addition to being an attempt to secure the passport, the legend made explicit the purpose of the photograph and the authority the legitimized the identification process.  The legend stated: “This is to certify that the photograph attached hereto is a likeness of the person to whom this passport is issued.  In witness whereof the seal of the Department of State is impressed upon the photograph.”  In 1928, as part of continuing attempts to make the passport a more secure document, the State Department began to use a machine that perforated a legend across the lower part of the photograph after it was attached to a passport.  This made it more difficult for someone to cleanly remove the photograph, and it was assumed to be more difficult to replicate than the rubber stamp.

All of this effort was necessary because officials considered the photograph to be an authoritative likeness of a person – hence their concern that a substituted photograph would allow someone to easily claim the citizenship and identity the state had intended for someone else.  The concern with fraud led officials to employ the relatively less “accurate” identification technologies of the signature and the physical description to further ensure the photograph on the passport was indeed that of the person the State Department had issued the passport to.  Officials reduced the categories in the physical description to height, hair, and eyes, but as noted retained the recently added category for “distinguishing marks.”  From 1924 applicants had to sign the back of the passport photograph.  According to a State Department publication, this signature “provided a written record to identify the rightful bearer in the passport, reduced the possibility of fraud, and insured that the proper photograph was attached to the application and the passport.”

During the 1920s the State Department also clarified its policy to ensure that all passports carried a photograph of the bearer.  In 1921 the secretary of state ruled that applicants had to provide a photograph regardless of religious beliefs; this was in response to an applicant intending to travel abroad as a missionary who had quoted Exodus 20:4 against the making of graven images to support his belief that he should not have to provide a photograph.  At the end of the decade the State Department issued a requirement that all infants had to have a photograph on a passport.  The department also sought to stop its officials, both at home and abroad, from accepting photographs that did not satisfy the increasingly specific requirements: thin paper, light background, and dimensions between 2.5 inches by 2.5 inches and 3 inches by 3 inches.

The passport photograph, if it adhered to this particular form, was considered to produce a “truthful” image that could be used to reliably link a person to a passport and thus accurately establish and individual’s identity.  The promise to deliver accurate identification was based in a faith in the mechanical reproduction of the camera over the lingering subjectivity of the written physical description.  It is therefore important to establish how the photograph came to be considered an objective, trustworthy technology that satisfied the new modern criteria for reliability in official identification.  It is equally important to recognize that this visual authority was contested, both implicitly and explicitly.  The “truth” that state officials granted the passport photograph in documenting a person’s face and thus their identity coexisted with a public perception of what a newspaper called the “distortion of passport photography.”  This “distortion” was the product of the clashing of two particular traditions of photographing people: the portrait and the “scientific” image (generally used in criminal identification photographs).  Most passport applicants associated representational truth with the specific articulation of realism in photographic portraits.  This association gave rise to complaints that a standardized passport photograph was unflattering, and in fact did not look like the bearer.  From the inception of passport photographs, people experienced “a pang of horrid surprise, almost disbelief, upon first looking tat the photograph with [was] to identify them in a foreign country;” at least according to a New York Times editorial from 1930…