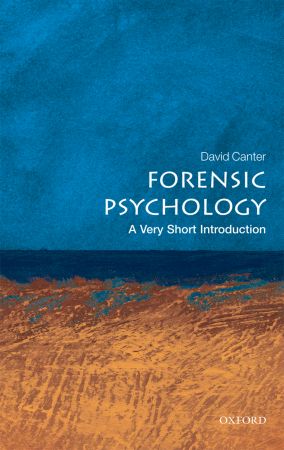 David Canter is Professor of Psychology at the University of Hudderfield. Widely known for developing systemic offender profiling in Britain and creating the emerging field of Investigative Psychology, he also provides evidence to government enquiries and major court cases. His new book is Forensic Psychology: A Very Short Introduction, and in the short excerpt below he looks at what a ‘psychopath’ really is.

There are many individuals who commit crimes who understand perfectly what they do and its illegality but who have no obvious mental problems. They are lucid and coherent with no signs of any learning disability or psychotic symptoms. Some of them can be superficially charming and are intelligent enough to be very plausible on first acquaintance. They do not hear voices or think that they are commanded by forces beyond their power to commit crimes. Yet, over and over again, they abuse people, lie without any compunction or remorse, can be unpredictably violent, and seem unable to relate effectively to others over any extended period. Various forms of criminality are almost inevitably an aspect of the lifestyles of these individuals. In the jargon of mental health professionals, such people may be given a diagnosis that implies that their ‘personality’ is somehow disordered.

In psychiatric medicalization of human activity, a whole set of ‘personality disorders’ has been identified that attempts to distinguish different ways in which individuals may have difficulty in relating to others. The one that has found its way into popular discourse is ‘psychopathic disorder’. There are complications here because the term ‘psychopathic disorder’ is not a medical diagnosis but a legal term under English and Welsh law that refers to a ‘persistent disorder or disability of the mind’, not that far removed from the McNaughton rule that first emerged over a century and a half ago. Thus there is some debate as to which of the psychiatric diagnoses of personality disorder are closest to the legal definition of ‘psychopathic disorder’, and whether any of them relates to the popular conception of a psychopath.

The Hollywood portrayal of the psychopath is someone who is inevitably a merciless serial killer, often some sort of cross between Dracula and Frankenstein’s monster. Silent films from the 1920s such as The Cabinet of Dr Caligari to the more recent Kalifornia, or No Country for Old Men, never really provide any psychological insights into the actions of the monsters who are the anti-heroes of their dramas. They are presented as pure evil. The rather more psychologically interesting films such as Psycho or The Boston Strangler provide pseudo-Freudian explanations for the nastiness of their villains, but still present them as rather alien individuals who can appear unthreatening but deep down are malevolent.

Until you have met someone whom you know has committed horrific violent crimes but can be charming and helpful, it is difficult to believe in the Hollywood stereotype of the psychopath. Without doubt, there are people who can seem pleasant and plausible in one situation but can quickly turn to viciousness. There are also people who just never connect with others and are constantly, from an early age, at war with those with whom they come into contact. If we need a label for these people, we can distinguish them as type 1 and type 2 psychopaths. The former have superficial charm, are pathological liars, being callous and manipulative. The clearest fictional example of this sort of psychopath is Tom Ripley, who has the central role in many of Patricia Highsmith’s amoral novels. The type 2 psychopaths are more obviously criminal, impulsive, and irresponsible with a history of juvenile delinquency and early behavioural problems.

Another label that may be assigned to people who are habitually involved in illegal, reckless, and remorseless activities that has a much broader net than ‘psychopathy’ is ‘antisocial personality disorder’. But we should not be seduced into thinking that these diagnoses are anything other than summary descriptions of the people in question. They do not help us to understand the causes of people behaving in these unacceptable ways. Some experts have even commented that they are actually moral judgements masquerading as medical explanations. So although the labels ‘personality disorder’ and ‘psychopath’ do summarize useful descriptions of some rather difficult, and often nasty, people, we need to look elsewhere for explanations of how they come to be like that.

Are you a forensic psych expert?