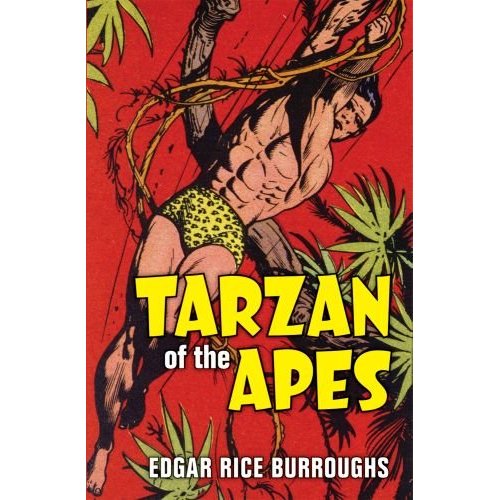 Tarzan of the Apes

Tarzan first came swinging through the jungle in the pages of a pulp-fiction magazine in 1912, and subsequently in a novel that went on to spawn numerous film and other adaptations. OUP are publishing a new edition of the original novel Tarzan of the Apes, by Edgar Rice Burroughs, that sets the book within its historical and literary contexts, and include readers’ letters and selections from related narratives. In this original blog post, editor Jason Haslam of Dalhousie University, Canada, reflects on Tarzan as a cultural icon.

The decades surrounding the turn of the twentieth century saw the creation of more than a few fictional characters that would become enduring cultural icons, including some who have consistently remained in the public eye and others who have resurfaced occasionally: in addition to the pop culture staples of Stoker’s Dracula, Stevenson’s Jekyll and Hyde, and Disney’s Mickey Mouse, one can also look to the recent and upcoming cinematic incarnations of Lewis Carroll’s Alice, Phillip Francis Nowlan’s Buck Rogers, and Edgar Rice Burroughs’s John Carter of Mars. Among these figures, though, another, more famous, creation of Burroughs holds a special place: Tarzan.

One of the most popular and pervasive characters of the pulp publishing period of US literary history, Tarzan first appeared in Tarzan of the Apes, originally published in the October 1912 issue of the popular fiction magazine, The All-Story – where it was described on the cover as a “Romance of the Jungle” – and then as a book in 1914. The novel was a huge success, and even its magazine publication received glowing letters of praise from its readers (although the ending -in which Tarzan and Jane Porter are forced to deny their love for each other – was not so popular: one reader wrote to The All-Story to say, rather bluntly, that “Tarzan of the Apes is a swell story, except the ending, which was rotten”).

The significance of the figure of Tarzan cannot be underestimated, certainly in relation to American popular culture, but arguably to global culture as well, given the number of translations of the novel. Just as importantly, Tarzan entered popular culture at a time when the centrality of print media was giving way to radio, television, and film. From Hollywood to Bollywood and beyond, the screen Tarzan is indelibly imprinted in the popular imagination, most recognizably as Jane’s romantic – if not very communicative – hero. Between the late 1920s and the 1960s, Tarzan was on the silver screen almost every year. Tarzan has also swung through almost all of the other branches of popular culture, from comics, to radio and stage – even to song. It would not be an exaggeration to suggest that the history of twentieth-century popular culture and the history of Tarzan are inseparable.

The novel, however, does not portray the grunting ape-man of the films, but instead a French- and English-speaking, suit-wearing sophisticate. In the first sequel, The Return of Tarzan, he even becomes an international gentleman spy, more James Bond in his tuxedo than Johnny Weissmuller in his loincloth, or Elmo Lincoln, the first adult screen Tarzan (who, reportedly, actually killed a lion on set). But, Tarzan’s eventually cultured nature only serves to bolster his disdain for civilization: he is a sophisticate who denies the necessity or desirability of sophistication. Tarzan might have adventures in civilization, but he continually returns to the jungle.

And it’s in Burroughs’s mythologized rendering of the African jungle and the stereotyped depiction of black Africans that we can arguably see the most profound and negative effects of Tarzan’s popularity. Both in the original novel and in the classic films, Africans and black people in general are drawn according to the grossest of bigoted stereotypes. Picking up on the African explorers’ tales he read in the Chicago Public Library, Burroughs repeated and, through his work’s popularity, perpetuated the worst of racist illogic: Africans in Tarzan of the Apes, and in much of the popular culture artifacts springing from it, are both cowardly and cannibalistic, childlike and cunning. It is, in fact, difficult now to imagine that Tarzan, as a figure, could ever be free of these associations. Attempts to do so have often failed miserably: look at Disney’s 1999 animated feature, which, as many have noted, tries to remove the racism of the source text by removing black people from Africa altogether.

Instead of such clumsy attempts to extricate Tarzan from his – and our – own history, Tarzan could be seen as a populist entry point into discussions of the violence that characterizes the history of European and American relations with Africa. Burroughs himself even begins the conversation with several specific historical references early in the novel, decrying certain kinds of colonial violence: the reason that Tarzan’s biological father was going to Africa to begin with was to investigate the abuses of “black British subjects” by Belgium’s Leopold II. Given Tarzan’s centrality to the popular and mass culture of the twentieth century, to ignore him is impossible, and to re-romanticize “his” jungle is unacceptable, but to analyze his origins and effects seems both valuable and necessary.