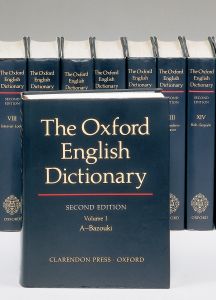 Mark Peters, a language columnist for Good and Visual Thesaurus, as well as the blogger behind The Pancake Proverbs, The Rosa Parks of Blogs, and Wordlustitude is our guest blogger this week. In this post, he looks at nonce words in the Oxford English Dictionary.

The longest entry in the enormous online edition of the Oxford English Dictionary is for the verb put. If I wanted to burn out my toner, I could print all 198 pages, which contain definitions and quotations for hundreds of meanings and variations of that little word. As far as its place in the language, put is well-put-together, and this entry is a mega-put-fest.

Not all words in the mother of all dictionaries are so well-represented. There are thousands of nonce words—words like mega-put-fest, which I just made up—that were coined for one occasion and possibly never used again. Nonce words may not stay at the language party long, but they’re damn entertaining while there. I should know, as editor of Wordlustitude, an online dictionary that collects nonces such as PBS-ploitation, alien-head-ectomy, snow-pocalypse-icane-mageddon, un-world-domination-istic, plagiarize-iddly-izer, dung-swaddled, plate-of-food-ometer, Beyonce-ologist, bonkers-gasm, Creepyguy-istan, French toast-y-ish, catepillar-tastrophe, Spinal-Tapezoidal, cross-Conan-ization, do-whatever-you-want-cation, and colleague-icide. To use one of the thousands of nonces I’ve collected, these words are chock full o’ excellentness-itude.

In chronological order, here are a few rare, raw, and real words from the OED. Why not rescue them from their dusty—er, digital—home? You won’t regret sprinkling these terms liberally in your tweets, rants, soliloquies, recipes, and prophesies.

cupstantial, 1583
If you thirst for a more substantial synonym for booze-soaked, here it is.

transfisticate, 1600
At one point, Mike Tyson was the best transfisticater in the world. Pugilists be warned: the threat “I’ll transfisticate your face” will cause more confusion than fear.

cakate, 1622
This means “to serve with cake,” so next time you placate an enemy, maybe you should cakate them too. If fact, I’m going to add self-cakating to my daily regimen of self-serving and self-medicating.

Scotiety, 1655
The OED defines this as “The essential nature of John Duns Scotus.” Considering Scotus’ middle name was the inspiration for the word dunce, I hope you and yours are not brimming with Scotiety.

pulse-pad, 1706
This is a slang word for a doctor; the contemporary translation would be stethoscope-face or malpractice-butt.

obscenometer, 1828
If you don’t know obscenity when you see it, this handy device is like a radar gun for filth (or it would be if it were real).

philofelon, 1831
Some people love cupcakes, the Boston Red Sox, Lost, or botany, but if it’s criminals that make your palms sweat and your heart go pit-a-pat, you are a philofelon feller or female, making everyone proud.

piggicide, 1837
This refers to a pig-killer, not the self-pork-chopping of a sad, sad pig with shattered dreams and dry mud puddles.

omnifidel, 1848
If you’ll believe anything, you’re gullible. If you believe everything, you not only have a world-class memory, but you’re an omnifidel: the infidel’s bizarro twin.

comato-crapulose, 1850
Roughly translated, this means hungover to the point of death. Crapulose is a variation of crapulent, which relates to heavy drinking, not crap as garbage or excrement. However, comato-crapulose individuals are in no condition to dispute any etymological interpretation of this term.

wiglomeration, 1853
Used by Charles Dickens in Bleak House, this means more than a conglomeration of fake hair: it specifically skewered the ceremonial balderdash of judges, who were so well-wigged.

honey-moonshine, 1872
If your marriage (or any new situation, like a book club or prostitution ring) has lost its initial spark, perhaps you’ve just run out of honey-moonshine, a refreshing yet easily depleted imaginary beverage.

polydoggery, 1875
What do we have here? A perverse, poochly permutation of bestiality and polygamy, a practice endorsed by only the most criminal of churches and kennels? Nah. This just means having a bunch of dogs.

podication, 1884
Do children deserve a swift, severe podication? They do if you believe in spanking, because podication—despite the images of zombified pod people it brings to mind—is “The process of being struck on the buttocks; a blow on the buttocks.”