By Kirsty McHugh, OUP UK
Today sees the long-awaited publication of The Historical Thesaurus of the Oxford English Dictionary. Conceived and compiled by the English Language Department of the University of Glasgow, and based on the Oxford English Dictionary, it is the result of 44 years of scholarly labour. The HTOED is a groundbreaking analysis of the historical inventory of English, allowing users to find words connected in meaning throughout the history of the language in a way that has never before been possible.

Kicking off some wonderful posts on the HTOED, here are some fun facts and figures about this incredible work.  Be sure to check back all week to learn more!

* At just under 4,000 pages, the HTOED is the largest thesaurus in the world. It covers approximately 800,000 word meanings from Old English to the present day.

* The HTOED provides a breadth of knowledge that is found in no other work, and has more synonyms than any other thesaurus. The word immediately, for example, has 265 synonyms, ranging from ædre, which is only found in Old English, to yesterday, which is first recorded as being used in the sense of immediately in 1974. 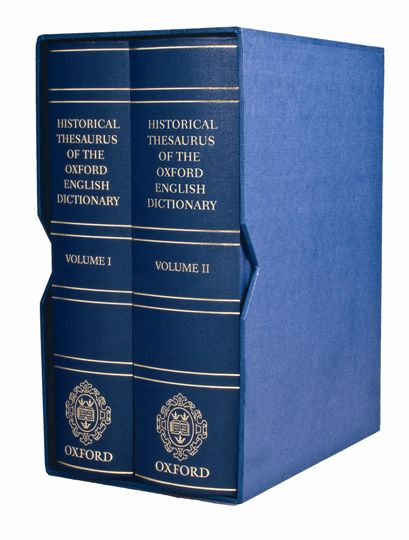 * It uses an entirely new thematic system of classification, with a detailed meaning structure that distinguishes between true synonyms and closely related words.

* There are approximately 800,000 meanings within the HTOED

* The largest category in the HTOED is “immediately” with 265 meanings

* In total, 230 people have worked on the project

* The project faced its most significant challenge in 1978 when the building the project was housed in caught fire. The entire archive of paper slips that were used to record each entry were very nearly destroyed. They were only saved because they were in boxes inside metal filing cabinets.

* During the 1980s the Old English material was entered into electronic databases developed in London. The UK government sponsored a programme to train people in editing and data entry skills. The trainees helped to edit and input the bulk of the HTOED data into an electronic system.

* With financial straits being an ever-present backdrop, one team-member, perhaps with excessive zeal, worked out how many pages of the OED could be recorded by a slip-maker within the lifetime of a single pencil (answer: 130)