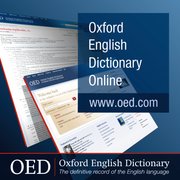 The Oxford English Dictionary Online features more than 600,000 meanings of words, using more than 3 million quotations to show how words have been used over the entire history of the English language. It is the only English dictionary that aims to trace the first recorded use of every sense of every word, to show when it entered the language.

Ammon Shea recently spent a year of his life reading the OED from start to finish. Over the next few months he will be posting weekly blogs about the insights, gems, and thoughts on language that came from this experience. His book, Reading the OED, is out now.

All dictionaries have mistakes. Ghost words creep in, there are occasional misspellings, or perhaps the printer was hung over one day and misplaced some punctuation. In addition to these normal forms of human error there are others that are created by language, as it continues its inexorable change, rendering definitions and spellings obsolete. Furthermore, as the science of lexicography itself advances, certain things, such as etymologies, that made sense a hundred years ago, begin to look suspect in a modern light.

The OED is certainly not exempt from this immutable aspect of lexicography – it does have errors, although I like to think that it has less than its fair share. As the entire thing is now being edited I’ve seen those few errors that I noted disappearing from its text. I don’t begrudge the editors their desire to improve the dictionary, and I’m happy to see the errors removed. But there is another type of entry that is also being edited out, and although it makes sense to continue with these removals, I’m saddened to see them go. I am referring to the Absurd Entries.

Absurd Entries is the name that I gave to a certain class of definition that I would come across every so often when reading the OED. They are rarer than the mistakes, and considerably more fun to read. These are the extremely rare moments when the OED does something that is so inexplicable that you have to close the book and check the cover to make sure that it is indeed the same book that you thought. I have decided, without giving too much thought to the matter, to divide them into two separate categories: ‘Blatant Disregard for the Reader’s Level of Education’ and ‘What Were They Thinking?’

In the category of Blatant Disregard, the past editors of the OED had seemingly come to the conclusion that since they sat around all day reading about words, accruing a monstrous knowledge of vocabulary, their readers must have done the same, and therefore it was not necessary to talk down to anyone with the definition. For instance trondhjemite is defined as ‘Any leucocratic tonalite, esp. one in which the plagioclase is oligoclase’. I have my doubts as to whether anyone has ever thought to themselves ‘I wonder what trondhjemite means?’ But if someone did, and went to look it up in the OED, it seems unlikely that this definition would clear things up much.

In a similar vein, self-feeling is defined as ‘used to render coenaethesis’, and occupatio is simply ‘preterition’. (I should add that in the online version both coenaethesis and preterition are linked to definitions, which feels a bit like cheating.) The word syllogism has a fairly simple and informative definition, and the OED even thoughtfully provides an example of a syllogism at the end of it. Which is written entirely in Latin. Although for sheer incomprehensibility, I do not think that I have seen many entries that can beat the masterful one that was created for the curious word disghibelline – ‘To distinguish, as a Guelph from a Ghibelline.’

Although it was amusing to read these entries, they could also be demoralizing, leaving me feeling as though I was less educated after reading the dictionary. The entries in the category of ‘What were they thinking’ merely made me laugh, albeit in a confused sort of way. For instance, the delightful word rufty-tufty, which starts out with a well-crafted and succinct definition in sense ‘a’ (‘Rude, rough’) and then seems to veer into sing-song nonsense with sense ‘b’ (‘Hey-day, hoity-toity’). Unberufen is treated in a similarly fantastic fashion, with its entire definition reading as follows: ‘‘Touch wood!’ (TOUCH v. 29b).’

In a rather unconventional bit of lexicography the word scindapse has no definition at all, but there is a nice little etymology which informs the reader that it comes from a Greek word which means ‘a ‘thingumbob’, a what-d’ye-call-it.’

I’ll confess that on several occasions I thought that the editors of the OED were having a joke at the reader’s expense. The entry for unpoetic gives no definition, but there is a note that tells the reader to ‘cf. next.’ The reader dutifully looks ahead to the next entry which is unpoetical, the definition of which reads ‘cf. prev.’ Or when James Murray used a list of eight different words to define a single sense of the word cannily (‘Sagaciously, skilfully, prudently; cautiously, slyly; gently, softly; comfortably’) and then tacked on an etc. at the end, for good measure.

I am afraid that as the edit of the OED continues, these bits of absurdity will be excised, along with any outright errors that the editors find. It will obviously be an improvement, at least in terms of improving the clarity of these definitions. Yet the whimsical anthropomorphizer in me is sad to see that murinoid has had its definition changed from ‘Resembling the mouse or its allies’ to ‘Resembling a mouse; (Zool.) of or belonging to the subfamily Murinae…’ When I read the first definition I found myself afterwards musing about who the allies of the mouse were, whether they had previously been enemies, and who it was they were allied against; after I read the new definition I did not find my imagination tickled in the same way.

There is more than enough scholarship, clarity, and erudition already in the OED; it can afford to keep a few of these Absurd Entries, if only to provide the occasional belly laugh for future readers.

Ammon Shea is an American writer, known for his nonfiction books about the English language. With Peter Novobatzky, he wrote 'Depraved English' (1999) and 'Insulting English' (2001), which both highlight obscure and unusual English words. Shea later read the entire Oxford English Dictionary, and documented his observations in 'Reading the OED: One Man, One Year, 21,730 Pages' (2008). He has worked as consulting editor of American dictionaries at Oxford University Press, and as a reader for the North American reading program of the Oxford English Dictionary. He lives in New York City with his wife (a former lexicographer), son (a potential future lexicographer), and two non-lexical dogs.

On getting in (and out of?) scrape