Many people, myself included, have used PowerPoint to make important presentations. Did you just throw boxes on the screen or did you think about your audience and your message? I know that I am usually too overwhelmed by color and animation choices to put much thought into how each page should be designed. Stephen M. Kosslyn, chair of the Department of Psychology and John Lindsley Professor at Harvard University, has written a book to elucidate the process. In Clear and to the Point: 8 Psychological Principles for Creating Compelling PowerPoint Presentations, Kosslyn presents eight simple principles, based on modern science about perception, memory, and cognition, that will make any presentation work. In the original article below Kosslyn provides some tips to get you started.

Many PowerPoint presentations might be successful for Martians, but fail miserably for humans. Of course, they might also confuse and bore even the Martians, if they had similar psychologies as us humans. By “psychologies” I don’t mean neurotic tendencies or the like, but rather cognitive capacities and mental abilities.

Electronic slide shows (PowerPoint, Keynote, and all the rest) can become vastly easier to understand if presenters respect some simple rules, which will allow them to play to the mental strengths of their all-to-human audience members and avoid pushing them to (or beyond) their limits.

Here are a few of these rules:

Goldilocks Rule. Don’t give people too little or too much – give them just the right amount for the message you want to convey.

On the one hand, if you don’t include enough, you’ll just be dumping a puzzle on their laps – or, worse yet, make them annoyed at you for not being clear. On the other hand, if you give too much, you’ll make the audience work too hard. It might be tempting to show how smart, knowledgeable, and well-prepared you are by showering the audience with details. But if that information doesn’t really help you tell your story, and doesn’t help the audience understand your main points, then it just gets in the way. You will force the audience members to search for the information-bearing needle in the haystack of your words and graphics – and they will probably just give up. And they probably should, because you’ve put them in a Catch-22: People don’t like expending energy unless they know it’s worthwhile, but you’ve forced them to spend energy in order to find out whether it’s worthwhile to do so! 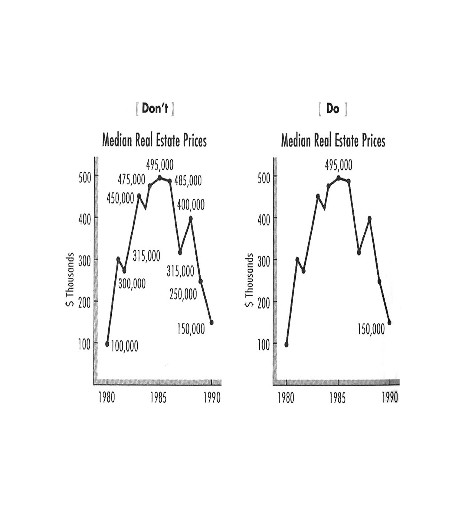 Rule of Four. Don’t expect the audience to keep in mind more than four groups on a slide. Car license plates and telephone numbers are as long as they are because of how much information we can easily store in our short-term memories: on average about four groups. This means, as a general guideline, that you shouldn’t show more than four bullets, and in each bullet should comprise no more than two lines (assuming that each line has on average two phrases or concepts).

The Rule of Four provides another reason why you should follow the Goldilocks Rule, and not provide too much. But more than that, if there is too much on a slide, the words are likely to be very small, and difficult to see. Nobody likes to risk eyestrain when viewing a presentation. And yet another reason for keeping it short and sweet is that if there is too much material on the slide, the audience will be reading one thing while you are saying another, and we are not good at such multitasking: You’ll force the audience to read or to listen to you — or to try to do both (which means that they will not do either very well). 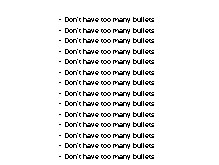 Rudolph-the-Red-Nosed-Reindeer Rule: As Rudolph knew all too well, what’s different stands out, be it a red nose, a large graphic, or words in bold.

Make what’s important stand out by being different from the surrounds. It can be larger, bolder, or a more striking color. Or it can move in from the side. But avoid overdoing this. The human brain is a “difference detector”: we notice the red nose among a group of black noses, or the nail the sticks above the floor boards. But if all noses are red, or all nails protrude, we quickly adapt and don’t pay attention to them. So, don’t use all bold, or have every word or graphic come flying in. If you decide to have the words or graphics come flying in from different angles, you will succeed in making the audience notice them – but you’ll also annoy the audience by continually grabbing their attention as if something new and important were happening when it was really same ole, same ole. Not just boring – irritating! 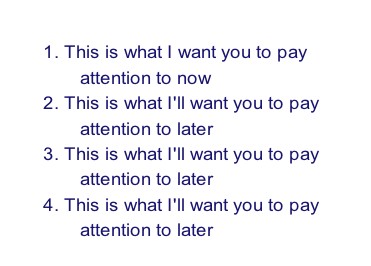 The above doesn’t help the audience focus on the material that’s relevant now. The below does this by respecting the Rudolf Rule, making what’s important stand out. 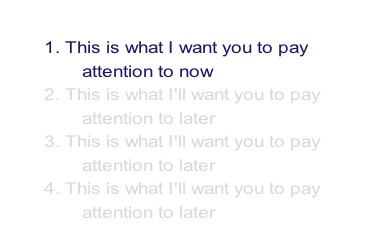 These are just a few of the rules that follow from facts about the workings of the human mind and brain. Electronic slide shows are a medium, and like any other they can be used for Good or for Bad. To quote Mike Aiken

“PowerPoint Jedi use their skills at PowerPoint to make difficult concepts clear. Me, I’m a PowerPoint Sith. I use my PowerPoint skills to confuse and obfuscate. If my boss doesn’t have a glazed look of bewilderment, then the brief isn’t complete. Embrace the dark side.”

If you want to be a PowerPoint Jedi, and not a PowerPoint Sith, my advice is to start by thinking about who your audience is, what they are interested in knowing, how you can tell a story that will connect for them, and how you can show-and-tell in ways that they can grasp without straining. May the Force be with you!

Stephen M. Kosslyn is chair of the Department of Psychology and John Lindsley Professor at Harvard University. He has written widely on the topics of visual communication, visual thinking, and the brain. His most recent book is Clear and to the Point: 8 Psychological Principles for Creating Compelling PowerPoint Presentations.