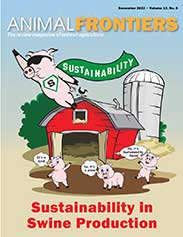 Animal Frontiers provides a novel forum for innovative and timely perspectives that have relevance to understanding the complex dynamics at work through animal agriculture, publishing discussion and position papers that present several international perspectives on the status of high-impact, global issues in animal agriculture.

You may not immediately connect the food you eat with how your body responds to inflammation. However, over the past decade, researchers have been identifying interactions between the immune system and metabolism, or, how what you eat changes your immune response. These interactions are especially important during times of high energy use, such as during growth or lactation, as activation of the immune system may cause nutrients (energy) to be redirected away from growth or lactation to the immune response (and therefore, survival; Davis, 2022).

As described in a recent Animal Frontiers article, studies in livestock have led to several key insights in this field. The immune and metabolic systems within specific tissues are capable of responding to different environmental cues, allowing individuals to adapt to changing conditions. First used to describe the relationship between obesity and inflammation, “immunometabolism” is defined as the interaction between the immune system and the metabolic system. Importantly, the inflammation related to metabolic conditions is different from that associated with disease.

The interaction between the immune and metabolic systems occurs at several levels, with key cell types and tissues that communicate to coordinate the responses. Fatty acids and reactive oxygen species generated within cells are some of the best-known triggers of immunometabolic adaptations. The liver and fat have been most frequently studied, as these tissues play important roles in both metabolism and immune responses. However, the role of gut microbiota in both inflammation and metabolism has emerged as an important area of study. Antioxidants and other nutrients may be able to regulate the immunometabolic reactions. Thus, nutrition and the immune response are intricately linked with implications for health and performance in both livestock and in humans.

Further study is needed to understand how climate change and other environmental variables will influence immunometabolism, as well as which nutrients most effectively control immunometabolic reactions for optimal health.

Explore the infographic to learn more:

Take a further look into immunometabolism in these related articles in Animal Frontiers:

This blog post is an edited version of the article "Immunometabolism in livestock: triggers and physiological role", written by Juan Loor and Ahmed Elolimy.

Sarah Reed is an Associate Professor in the Department of Animal Science at the University of Connecticut, and the Associate Editor in Chief of Animal Frontiers.

Horse power from the powerhouse of the cell [infographic]