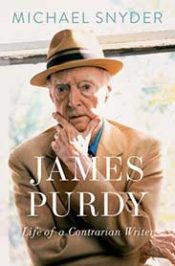 The American author James Purdy has long been considered a “lost” figure in literary studies—during his life he constantly struggled to find commercial and critical success, but he has always enjoyed a certain cult following among artists and writers interested in the fringes of society. This status was cemented early in his career. Michael Snyder, in the new biography, James Purdy, details how after publishing two key works, Purdy began making the connections that would carry him through his career.

Excerpt from James Purdy: Life of a Contrarian Writer

That autumn of 1956, Purdy reaped a harvest of correspondence from recipients of Don’t Call Me by My Right Name and Other Stories and 63: Dream Palace. This bounty vindicated his talent and risky decision to leave his teaching position.

Modernist poet William Carlos Williams wrote in September. Since he had suffered a stroke five years earlier, reading was difficult, so he depended on his wife, Florence Williams. She read aloud the first three stories, which they both enjoyed, and they planned to finish. Williams was frank in praise and criticism: “You have a rather lumpy style but at least there’s no redundancy and the perception and feeling makes the stories notable to a receptive mind. They’re downright good if at times somewhat crude—”…

Chicago writer Nelson Algren, a friend of Gertrude Abercombie who caused controversy with tough urban novels like Walk on the Wild Side and The Man with the Golden Arm, thanked him for the collection. “Your people come sharply alive. Hope the next book will be hardcover, and as honest as this one.” Thornton Wilder also wrote from Chicago with “many thanks” for the stories; he read them with “much admiration,” finding them “filled with remarkable insights,” especially “Eventide” and “Sound of Talking.”…

The most magnificent reply was from Dame Edith Sitwell. In late October, Purdy’s fate was forever changed. Although Purdy mailed the book to Sitwell, her discovery of it was a “minor mystery that was never solved,” her secretary and biographer Elizabeth Salter states. Edith fell asleep one afternoon at Castello di Montegufoni with “windows shuttered and doors closed against draughts and intruders as was her custom,” but when she awoke, a book was lying on her bed that “had not been there when she went to sleep.” Her memory may have failed her, though, since she was drinking a lot of wine in those days and had recently bloodied her face after a bad fall. Reading “Eventide” first, Sitwell believed she had “stumbled on a great Negro writer,” Salter writes. On October 20, 1956, Sitwell wrote from Montegufoni: “I do not know whether it was you, or whether it was your publishers, who sent me your Don’t Call Me by My Right Name. But I owe a debt of gratitude to you and to them.”…At her loneliest, Edith found that Purdy’s stories, with their “great compassion, insight, and mastery of language,” provided much consolation, biographer Geoffrey Elborn writes. She could “identify with the mood,” and was “overjoyed to have discovered a new writer in whom she sincerely believed.”

Stunned, James then sent 63: Dream Palace. Sitwell read it twice within two days of its arrival. According to Purdy, after reading its devastating ending capped with an obscenity, Sitwell swooned, and declared: “My former life has come to an end!” On November 26, Sitwell marveled: “What a wonderful book! It is a masterpiece from every point of view.” She was “quite overcome. What anguish, what heart- breaking truth!” He was “truly a writer of genius.” … Believing 63: Dream Palace and the stories ought to be bound together in one volume, she recommended her agents including David Higham and said she would write to them. She thought poet “Stephen Spender’s Encounter might be a good place” for his stories in England. As is now known, Encounter was secretly funded by the CIA. As soon as Spender returned to England, Edith wrote him about the stories. She spread the word to friends. To Portuguese poet and BBC Radio presenter Alberto de Lacerda, she acclaimed Purdy as a “much greater writer than Faulkner.” She could not think of “any living prose writer of short stories and short novels who can come anywhere near him. He is really wonderful.” With this all set in motion, within months, Gollancz accepted the works for publication.

Sitwell’s lyrical responses to his books nearly had an “unhinging effect” on Purdy. Reading her letters over and again, he could scarcely believe Sitwell had written them, since the works she extolled were the “very same works, unchanged in any particular” that American publishers had rejected with “bitter denunciation, contempt, and derision.”… On Purdy’s forty- third birthday, Sitwell wrote: “I am certain as I can be of anything that you will, in the course of time, be given the Nobel Prize.” He replied, “The person who should win the Nobel Prize, my dear Edith, is you! So many poets not fit to tie your shoelaces have won it.” Sitwell’s correspondence showed “extraordinary kindness and devotion to those she believed in,” and “warrior- like courage in defending them,” Purdy wrote Elborn. A fighter, Purdy admired those who fought for their convictions.

Many literati found Purdy’s use of black vernacular in “Eventide” authentic, and like Sitwell, a number of them initially assumed him to be black, including novelist and photographer Carl Van Vechten, poet Langston Hughes, and British novelist Angus Wilson. A longtime supporter and friend of black creatives, Van Vechten’s misapprehension is corroborated by his letter of November 1956: “I wish you would read Giovanni’s Room by another Negro friend of mine, James Baldwin.” Set in Paris, Baldwin’s novel was groundbreaking in its frank depiction of gay and bisexual life. Before meeting Purdy, “Carlo” solicited more information and a photo, and in December, he wrote: “I don’t mind TOO MUCH your NOT being a Negro. The reasons your Washington [DC] friends think you ARE is doubtless because you make frequent references to matters like ‘passing’ but doubtless you do it to tease or terrify.” In early 1957, Van Vechten stated, “Whether you are white or colored doesn’t make too much difference to me, but I am a little prejudiced in favor of COLOR!” When Purdy first arrived at his Park Avenue West apartment on December 18, Van Vechten seemed to hold out hope that James had a smidgen of African “blood” because Carlo “seemed surprised when he saw James,” Jorma said. Tall, white- haired Van Vechten looked him up and down and quipped, “I don’t think you have a drop.” During the evening, Van Vechten photographed the couple. Purdy was “one of the last writers Van Vechten championed seriously and continually,” and he even arranged for Purdy’s early papers to be accepted into Yale’s Beinecke Rare Book and Manuscript Library.

A week before Sitwell responded to the novella, Van Vechten wrote: “63: Dream Palace is NOW MY Dream Palace. ‘I would like to attend a wedding with you, on some bleak day, each carrying tiny cages of white rats in lieu of a prayer book. This would be HEAVEN. Hell would be attending a football game in evening clothes. I want to send some of your wet- dream palaces around and I find your publisher ridiculously slow in shipping. We must think of a better plan.” Carlo made it clear he intended to help Purdy find a good publisher. Seemingly referring to James, Van Vechten added a limerick exemplifying camp aesthetics:

Said a morbid and dissolute youth

I think Beauty is greater than Truth,

But by Beauty I mean

The obscure, the obscene,

The diseased, the decayed, the uncouth.

Such a response from this legend was thrilling. James in turn began to shower Carlo with new poems, satires, and stories, signed and dedicated to him. Purdy later declared that Edith Sitwell rescued him from certain obscurity, which is an attractive myth. But even if Sitwell had never encountered the work, Van Vechten would have helped him to get published in New York—just as he had helped Ronald Firbank, Langston Hughes, Nella Larsen, and many others.

Michael Snyder is the author of James Purdy: Life of a Contrarian Writer, John Joseph Mathews: Life of an Osage Writer, which was a finalist for the Oklahoma Book Award in non-fiction, and Our Osage Hills: Toward an Osage Ecology and Tribalography of the Twentieth Century. An expert on gay literature and Native writers, Snyder is an Assistant Teaching Professor at Dodge Family College of Arts and Sciences at the University of Oklahoma.