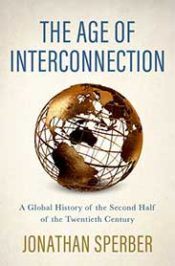 The Age of Interconnection: A Global History of the Second Half of the Twentieth Century

Now that COVID-19 seems to be gradually and painfully transitioning from a pandemic to an endemic disease, it would be instructive to place its appearance in the history of infectious disease during the twentieth century.

In the first half of the century, the three great killers among endemic diseases—smallpox, malaria, and tuberculosis—raging around the world (we think today of malaria as a tropical malady but in the 1920s there were outbreaks as far north as Siberia) were each responsible for more deaths than the 80 million who died in both world wars. Innovations stemming from the Second World War, an immense hothouse of technological progress, made it possible to contemplate combatting infectious disease on a global scale. A whole new class of drugs, the anti-microbials, were brought to production during the war, as was chloroquine, a very effective anti-malarial. Another product introduced during the war, the insecticide DDT, opened the prospect of eliminating or at least greatly reducing mosquitoes, carriers of infectious diseases, especially malaria.

In the three decades following 1945, wartime innovations would be used to combat infectious disease on a global scale. Anti-microbials would kill the bacteria responsible for a wide range of infectious diseases; public health measures, including combatting mosquitoes with DDT, would eliminate the conditions for others to spread. Antimicrobials had no effect on viruses, but by taking up the previously existing practice of vaccination on a much larger scale, and introducing new vaccines, viral diseases could be eliminated.

“In the first half of the twentieth century, smallpox, malaria, and tuberculosis were each responsible for more deaths than both world wars.”

A combination of antibiotics made it possible to cure tuberculosis, which had previously been impossible. (In the 1930s, half the patients released from English tuberculosis sanitoria as cured or greatly improved died within five years.) The UN’s World Health Organization launched a global campaign to eliminate smallpox entirely, supported by both the Western Powers and the Eastern Bloc—a true rarity during the Cold War!—with the last case of the disease recorded in 1977. A similar WHO campaign, the Malaria Eradication Program, combined massive spraying of DDT to kill mosquitoes with mass distribution of chloroquine in the hope of disrupting the complex life-cycle of the protozoan that causes malaria. Unlike smallpox, malaria was not eradicated, but in the three decades after 1945 its presence was greatly reduced in southern and eastern Europe, and in the more temperate or drier regions of Asia, the Americas, and Africa. Overall, infectious disease mortality rates plummeted and life expectancy rose rapidly around the world between 1945 and 1975/80. By the 1970s, it seemed that infectious diseases had been marginalized as a threat to human life; medical research moved on to tackling degenerative diseases, particularly cancer and arteriosclerosis, and elucidating the social conditions and practices, the so-called “risk factors,” that encouraged their appearance.

The last two decades of the twentieth century saw a completely unexpected return of infectious disease. One reason was the growth of hitherto unknown, new forms of viral disease, above all HIV/AIDS, which spread rapidly across the world in the 1980s, bringing in its wake wild fears, xenophobia, and conspiracy theories about its origin. The second was the appearance of resistance on the part of bacteria and insects against drugs and chemicals that had previously been so effective against them. The number of cases of malaria expanded rapidly in the tropics; antibiotic resistant strains of tuberculosis began to make an appearance, as did the so-called “super bugs,” MRSA, methicillin-resistant staphylococcus aureus. Infectious disease mortality rates rose, and the increase in life-expectancies slowed to a crawl. By the 1990s, there were growing expectations of a global infectious disease apocalypse in these new conditions.

For three decades, the apocalypse never came to pass. AIDS remained restricted to demographic niches and never spread among the general population. A new class of drugs, the anti-retrovirals, turned the disease from a death sentence into a treatable chronic condition. Africa was the great exception to these conditions and the wide spread of the illness, especially in conjunction with tuberculosis and malaria, as well as the inability to afford the very expensive antivirals, resulted in something on the order of 15 million deaths. Even in Africa, the number of both new cases and deaths has been gradually declining over the last 20 years, largely because Brazilian and Indian pharmaceutical manufacturers ignored the patents on anti-retrovirals and made them available for much lower prices.

By the second decade of the twenty-first century, it seemed that infectious disease had been deglobalized, restricted to the world’s poorest countries, whose inhabitants might fear contracting AIDS, tuberculosis, malaria, or Ebola, while in the Americas and most of Eurasia, lifestyle issues, such as smoking cigarettes, eating fast food, and not getting enough exercise, leading to deaths, often at advanced ages, from cancer, heart disease, or type-two diabetes, appeared as far greater public health risks. COVID-19 seems to have changed that, the disease spreading worldwide within a few months of its outbreak in Wuhan and bringing in its wake fears, xenophobia, and conspiracy theories, reminiscent of the appearance of HIV/AIDS during the 1980s. A consideration of the victims shows a different story: disproportionately the elderly and those suffering from life-style-related conditions, including high blood pressure, smoking, obesity and type-two diabetes. Excess mortality rates (the best measure of the disease, since its diagnosis, especially at the outset, was very uncertain) have been highest in globally lower-middle-income countries, such as Peru or Serbia, where these lifestyle conditions exist to a much greater extent than in the world’s poorest and—perhaps surprisingly—most affluent countries. COVID-19 has been an odd hybrid illness, a pandemic caused by a virus, spreading most strongly in countries and social groups where the risk factors for degenerative disease were greatest.

None of this history provides any certainty, of course, about the future nature and course of diseases around the world or in any of its regions.  But global experiences with infectious disease over the last century do suggest that seemingly irreversible trends—like the post-1945 decline of infectious disease—are indeed reversible and that an increase in globalization, that is in capital, goods, ideas and people crossing national borders, continents and oceans, does not necessarily lead to the homogenization of conditions around

Jonathan Sperber is Curators' Distinguished Professor of History Emeritus at the University of Missouri.

His previous book, Karl Marx: A Nineteenth-Century Life, was a New York Times bestseller and a finalist for the 2014 Pulitzer Prize in biography. His most recent book, The Age of Interconnection: A Global History of the Second Half of the Twentieth Century will be available from OUP January 2023.