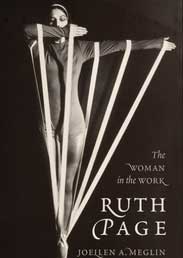 Ruth Page: The Woman in the Work

In 1977, reflecting on a six-decade career, Ruth Page (1899–1991) made an off-the-cuff remark to a newspaper reporter: “I was always making up dances. I knew right away that was the world for me. I never could endure a humdrum life.”

In her more than nine decades of life, Page created a large oeuvre of choreographies, served as the artistic director of several dance companies, staged her ballets on numerous others, completed 13 extensive national tours at the helm of the Chicago Opera Ballet, and collaborated with countless international and Chicago-based artists in dance and the related arts. As that rare creature—an American woman who, defining herself as a choreographer and ballet director, amassed a degree of power and prestige and exerted aesthetic prerogatives—her life and work offer refreshing paradigms for the twenty-first century, at a time when women still encounter a “satin ceiling” in the ballet world.

Page’s career stands as an exemplar of how a wider spectrum of choreographic voices could serve the diversity of ballet and, consequently, its popular appeal and ability to flourish today.

Always a creative boundary-crosser—whether of genre, gender, race, or sexuality—Page generated movement through her own embodied practice, using kinesthetic methods that stood at the cutting edge of modernism. Neoclassicism struck her as a banal throwback. So far from seeking purity of the medium, she relished what one might call the anti-ballet, or what was not ballet in the space of ballet; an experimentalist, she tested the limits.

Page’s ballet An American Pattern—originally titled An American Woman—presented an explicit statement of a female subject position. Premiering on 18 December 1937, it was probably, to boot, the first feminist ballet created in the United States. Not that its feminist message was unequivocal and resolute, because, for one thing, it emerged as a highly collaborative project, with Nicolas Remisoff co-authoring the scenario, Jerome Moross composing the music score, and Bentley Stone co-creating the choreography. Nevertheless, American Pattern embodied some of the dilemmas, conflicts, and compromises in Page’s own life, and these fueled its woman-centered subjectivity and implicitly feminist critique of women’s lack of meaningful options in society.

Early drafts of program notes hint at some of the ballet’s ambivalent messages. One seems to question the whole institution of marriage from a middle-class woman’s perspective: “Her husband, being himself satisfied with the limitations of American business success, has little meaning for her as a woman, so that in the end they are strangers. There seems to be nothing ahead for her except dull routine, to which she succumbs.” Was Page bucking “the problem that [had] no name” 26 years before Betty Friedan’s groundbreaking The Feminine Mystique touched off a second wave of feminism? The scenario certainly seems to challenge ideas that a woman’s whole being should revolve around husband and home, with housework representing the pinnacle of achievement. Admittedly, the jabs at American capitalism and unthinking automatism give it a quasi-radical, interwar-era slant; nevertheless, its focus on a woman’s alienation and failure to discover meaningful existence, hemmed in as she was by convention, anticipates feminist arguments articulated decades later.

In the ballet’s plot, the young woman turns from one false icon or empty ecstasy to another: sex, money, mysticism, and mob—each represented by a male power figure. Neither acquiescing to nor flouting conventional, decorous existence offers a solution. Does the tragedy proceed from a flaw in the development of a self or society’s lack of meaningful options? Or are these two failings intimately related? “Her life is tragic because she has failed to find herself—her soul.” The woman finds neither worthwhile purpose nor meaningful relationships; it is truly an existential crisis without the prospect of educational or professional growth, self-development, or transformation.

Such a predicament did not exactly reflect Page’s life. She had found meaningful—very meaningful—work: dance. She had built gratifying relationships with her husband and chief advocate, Thomas Hart Fisher; with coworkers in the arts; and with friends in Chicago, New York, and Europe. She had found her soul in creating through dance. Moreover, she knew how to educate herself through mentors and collaborators, literary and cultural pursuits, touring and travel, and new ballet projects. However, there was one overarching conflict or compromise in her life that could at times be felt as bad faith: settling for Chicago when she wanted New York. Her marriage to Fisher had made that compromise necessary. Nevertheless (or perhaps because of this), her husband supported her career ambitions magnificently, serving as her agent and attorney and, as a fellow arts lover and cultural patron, sharing her fascinations and commitments. But the kernel of truth in American Pattern—beyond its choreographic study of a social malady larger than herself—was that conventional, respectable, patterned existence filled her with dread. The life of a housewife, dilettante, or nondancer (non-doer of any sort) was anathema and oppression to her.

Flagrant, outlandish, off-kilter, and weird, yes; “humdrum,” no—not a word one would ever use to ponder the life and work of Ruth Page.

Joellen A. Meglin, long-time editor of Dance Chronicle: Studies in Dance and the Related Arts and professor emerita of Dance at Temple University, has published extensively on Ruth Page and American ballet. Her re-imagination of Page's solo Expanding Universe was recently presented at the 92nd-Street Y and the Noguchi Museum in New York.