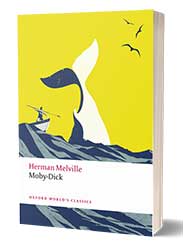 What does a “heart-stricken moose” sound like when it “sob[s]”? Why would someone yearn to “fist a bit of old-fashioned beef in the fore-castle”? What manner of destitute is a “butterless man”? Can I, too, get away with coining adverbs like “suckingly” and “uninterpenetratingly”? What is “the universal thump,” and why would I want to thump others–and be thumped in turn?

There are a lot of peculiar phrases in Moby-Dick. My new introduction to the second Oxford World’s Classics edition of Herman Melville’s novel highlights the startling weirdness of the book, both in its literary form and its language. Weirdness extends beyond strangeness: weirdness also invokes enchantment, fate, curiosity, and the supernatural. In other words, when I say that Moby-Dick is weird I mean that in the best imaginable way. The novel’s weirdness does not subvert its monumentalism (nor its monumental reputation!) but serves as a sly sidelight on Moby-Dick’s ambitious attempts to create meaning.

Take, for instance, the famous scene in “The Quarter-Deck” in which Ahab reveals to the crew that the true (but heretofore hidden) aim of their voyage is not a general commercial whale hunt but chasing and killing the notorious white whale known as Moby Dick, who had “dismasted” Ahab of his leg. It’s a powerful, profound scene about whether the force that controls the world—whether natural or supernatural—is a force for good, evil, or indifference.

But amid the powerful profundity, Ahab overwhelms the objections of his first mate not just with his rhetorical intensity, but by weirdly infecting him with something “shot from [his] dilated nostrils”; Starbuck “inhale[s] it in his lungs.” This coarsely vivid image is matched in weirdness only by Melville’s description of the sound of grief made by Ahab when speaking of his missing limb and his need for revenge in the same scene. Ahab heaves “a terrific, loud, animal sob, like that of a heart-stricken moose.” What does a “heart-stricken moose” sound like? Moby-Dick does not presume that a reader might reject the outsized improbability of this image, or dispute how that poor, sad moose might have had its heart broken. The novel instead asks us to take far-flung, incommensurate elements—a moose having a cardiac event, not to speak of a white whale bearing “inscrutable malice”—and bring them near to our understanding.

In what follows I share some more of the most delightfully weird phrases or descriptors in the novel, in rough categories. First is the playfully, animalistically weird:

Next, we have some characterological hot takes. Of the Pequod’s sailors, Melville writes:

We turn now to rhetorical devices. Melville loves litotes, or figures of speech in which a positive meaning is suggested by means of double negatives. You might say that a fair observation is “not wrong,” in an example of how litotes convey understatement. But litotes keep visible the dark side of an affirmational phrase: when I explain litotes to my students, we all agree that we would rather be thought “attractive” than be described by the litotes “not unattractive.” Moby-Dick (and indeed all of Melville’s writing) is a riot of litotes, weird ones. For example:

My final category of weirdness is Moby-Dick’s baroque adverbs. Among other indulgences, Melville promiscuously makes and unmakes adjectives, adverbs, and nouns. His extravagance of language was noted by his contemporary reviewers as well as by today’s readers. (One review of his novel Pierre even printed a long list of “Mr. Melville’s word-combinations” that gave particular offense to the reviewer. These include “flushfulness,” “patriarchalness,” “intermarryingly,” “unemigrating,” and “uncapitulatable.” [American Whig Review, 1852]) These are my favorite adverbial word-combinations in Moby-Dick:

All of these adverbs are flagged by Microsoft Word’s spell check function as ungrammatical, but all make sense to me—in fact, all produce a gloriously weird excess of sense. Such words can present a challenge or a puzzle to a reader, but they also bear voluptuous linguistic and significatory pleasure. Melville was aware that such pleasures might be fugitive, though. As he was completing Moby-Dick, he wrote to Nathaniel Hawthorne “What I feel most moved to write, that is banned, — it will not pay. Yet, altogether, write the other way I cannot. So the product is a final hash, and all my books are botches.” In words like “sidlingly” and “uninterpenetratingly” we see a glimpse of what it means to “write the other way.”

I close by passing along “the universal thump.” When Ishmael goes to sea, he tells us in the novel’s first chapter, he goes as a “simple sailor,” neither passenger nor officer. This will mean that he is ordered about or disciplined on ship. But as he explains:

“However the old sea-captains may order me about–however they may thump and punch me about, I have the satisfaction of knowing that it is all right; that everybody else is one way or other served in much the same way–either in a physical or metaphysical point of view, that is; and so the universal thump is passed round, and all hands should rub each other’s shoulder-blades, and be content.”

Ishmael turns the thump of the disciplinary blow into the soothing shoulder-rub of collective content. “The universal thump” may be a weird thing to seek out, but Melville assures us that “it is all right.”

Hester Blum is Professor of English at The Pennsylvania State University.

Blum is past president of the Herman Melville Society, and her honors include a Guggenheim Fellowship and multiple grants from the National Endowment for the Humanities.

She participated in the 38th Voyage of the Charles W. Morgan, the world's last surviving wooden whaleship and the sister ship to the Acushnet, in which Melville sailed.

Moby-Dick is the answer. What is the question?