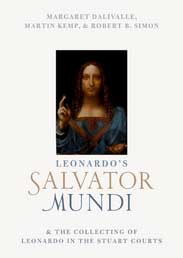 Typing a search term into Google prompts a useful feature called “People also ask.” It’s a query expansion tool, designed to optimize high-traffic keyword searches. When people ask me about the Salvator Mundi, just like Google, I can predict the questions they will “also ask.” Top of the list: do I think the painting is a “real” Leonardo? My go-to answer paraphrases (the then) Prince Charles’s infamous equivocation about the nature of romantic love. “It’s a real Leonardo,” I say, “whatever that means.” This may sound wantonly facetious, but it’s not. What I mean is that the painting broadly corresponds, in materials, technique, and approach, to the small group of paintings accepted to be by Leonardo da Vinci; that is, the established canon of his works.

Is the Salvator Mundi a “real” Leonardo da Vinci?

The attribution of the Salvator Mundi to Leonardo is uncontroversial among most of the key specialists. We can plot their views on a sliding scale ranging from “execution by the sole hand of Leonardo” at one pole, to “execution by Leonardo with varying degrees of input from a studio assistant” at the other. Art historians tend to allow a degree of elasticity about such categories, in recognition of the abundant evidence of collaborative practices in the Renaissance workshop. The “market,” on the other hand, inculcates more rigid classifications. The standard glossaries and legal disclaimers of major auction houses impose a strict hierarchy organized according to proximity to a given artist’s hand. The internal categories are sharply delineated, and, accordingly, are confirmed in differentials of monetary values. A work described as by “Significant Italian Renaissance Artist” will usually achieve a higher hammer price, sometimes in the order of millions, than an otherwise equivalent work described as by “Significant Italian Renaissance Artist and Workshop.”

The intense public interest in the Salvator Mundi, and whether or not the painting should be attributed to Leonardo da Vinci, is a product not only of its re-emergence during the internet age, but also its achievement of the world record price for a work of art at public auction ($450,000,000, 15 November 2017, Christie’s, New York). A moment of spectacular congress between the Academy and the Market, the sale led many to question the process by which the canon of Leonardo is established and policed. While any new attribution to Leonardo has, since at least the nineteenth century, instigated public debate, modern media conditions—the live broadcast of the auction, the near-universal access to the internet, the algorithms designed to polarise opinion online—serve to promote and amplify controversy.

Still, the question of what exactly comprises “a Leonardo” is fascinating and imperative. It relies on the construction of his artistic persona over the course of five hundred years, in a variety of locations, and against the backdrop of gradually widening access to, and understanding of, his writings.

Why is Leonardo da Vinci the world’s most famous artist?

That leads to the second question “people also ask” me: Why is Leonardo the world’s most famous artist? In one sense, it’s because he got a head start in the fame game, by writing himself into the narrative. The years he spent at the court of Ludovico Sforza in Milan (c.1483-90) were undoubtedly instrumental to Leonardo’s budding reputation. It is there that we see him jostling for place among a gaggle of official sonneteers. Embedded in the cut-and-thrust, he is an actor in the performance of paragone. He inhabits the poetry of his literary rivals and collaborators; their paeans to his portraits are littered with Neoplatonic tropes and Petrarchan allusions. Bernardo Bellincioni extols the portrait of Cecilia Gallerani (Lady with an Ermine): “the supreme talent and hand of Leonardo” rivals Nature. Gasparo Visconti remarks waspishly that in painting others, Leonardo always portrays himself. Moreover, he is easily distracted, “his brain goes wandering each time the moon wanes.” By the turn of the sixteenth century we find Leonardo not only acclaimed the “New Apelles,” but, like the famous ancient Greek painter’s rival, Protogenes, we hear that he “spends many years to complete [a panel].” We can, perhaps, detect Leonardo’s agency in these poem-portraits. They iterated the Plinian model of fame, promoted comparisons between himself and his classical forebears, and raised his profile among the select circles of the Milanese court.

Nor is the eulogizing of Leonardo in early print media unconnected to the promotion of Florentine—and Medici—interests. It is no coincidence that his chief advocates were fellow denizens of the Tuscan city. Ugolino Verino, who tutored Giovanni de’ Medici (later Pope Leo X), praised Leonardo in An Illustration of the City of Florence (1503); he was “possibly” pre-eminent among a number of prominent artists. It was Giorgio Vasari who, in his seminal biography of 1550, The Lives of the Most Excellent Painters, Sculptors, and Architects, formulated the canonical Leonardo, and provided the definitive early statement of his celebrity: “the fame of his name so spread abroad that, not only was he valued in his own day, but his renown has greatly increased since his death.” Yet, while Vasari reserved his greatest praise for the “divine” Michelangelo, it is Leonardo who holds sway in the public’s mind as the most famous artist of all time. Why should this be?

“The key to Leonardo’s singular celebrity is, I think, his adaptability; he is re-invented by each era according to its particular concerns. There are many Leonardos.”

This phenomenon derives from Vasari’s sketch of the light and shade of Leonardo, his ingenuity, but also his “faults” (he’s easily distracted, never finishes a task). A sixteenth-century audience would have appreciated the allusions to celebrated ancient painters; later generations found the discussion of character and psychology appealing. Flaws and failings humanize Leonardo, they make him “relatable” to modern audiences.

As Martin Kemp notes in a foreword  to an edition of Leonardo’s treatise on painting, The Fabrication of Leonardo da Vinci’s Trattato della pittura, (Leiden: Brill, 2018, 2 vols; vol. 1, xi.), “Inevitably we tend to project the Leonardo we know today into past eras. […] Until the late nineteenth century, ‘our’ Leonardo was not known.” The gaps and mysteries in our knowledge only serve to promote the continual reformulation of Leonardo. Paul Valéry, in his seminal 1895 essay on Leonardo, confessed that, knowing very little about him, he had invented a Leonardo of his own. Perhaps that is what everyone does.

We can credit the received canon of Leonardo’s paintings in large part to Vasari. His Life mentions 11 works (one a collaboration with Verrocchio) that are tentatively identifiable with extant paintings and drawings by Leonardo/his workshop. Of these, six can be confirmed with some conviction. This small catalogue defines what we have come to think of as “a Leonardo.” Most of all, we measure by the yardstick that is the Mona Lisa.

Why is there no account of the Salvator Mundi in early sources?

Vasari does not mention a painting corresponding to a Salvator Mundi. This brings us to the other question “people also ask”: Why is there no account of this now-famous painting in the early sources on Leonardo? Does this mean he did not paint it?

The painting has become a celebrity in its own right, but it was obscure before 2011. To borrow a famous phrase, it was a “known unknown,” a “hypothetical Leonardo.” There is no mention of such a work in the early biographical sources; no eyewitness account. The first published association of the name of Leonardo da Vinci and an image of a mature, frontal Christ dates from the middle of the seventeenth century, when it was inscribed in the legend of Wenceslaus Hollar’s etching: “Leonardo da Vinci pinxit, Wenceslaus Hollar fecit Acqua forti, secundum Originale. AO 1650.”

The current fame of the Salvator is bound up with the fame of Leonardo, and indivisible from the $450,000,000 price tag. It is, therefore, a significant object in the public’s imagination. There is a natural expectation of some early record of its creation or ownership. Surely it was famous in its own day? What are we to make of the lack of documentation of the Salvator?

First, we should remind ourselves that the Last Supper is the only painting by Leonardo that has a continuous history, for reasons that are self-explanatory. Second, that plotting the movements of a small object made of wood and paint over the course of half a millennium is inescapably problematic. Third, that a canon is a construct, not a fact.

Leonardo’s canon is a citadel against which any new attribution must be attempted. Martin Kemp’s coining of the Salvator Mundi “the male Mona Lisa” deftly posited the painting in direct relation to Leonardo’s most canonical work. In doing so, he unwittingly provoked the resonant by-line annexed by Christie’s to market the painting in 2017.

Speaking to USA Today ahead of the auction, Francois de Poortere enthused, “This is the holy grail of Old Master paintings, some people call it the male Mona Lisa. People are deeply taken by this work. You could buy it and just build an entire museum around it.” His words seem to have exerted a powerful influence on the winning bidder, Crown Prince Mohammed Bin Salman, to judge by his apparent, and ultimately frustrated, desire to have the two paintings hang side-by-side in the Louvre, and his reported plan to exhibit the Salvator in a dedicated museum in Saudi Arabia.

Margaret Dalivalle read History of Art at Oriel College, University of Oxford, after which she took up a post-doctoral research fellowship at Yale University. Subsequently, as Francis Haskell Memorial Fund scholar, she conducted research into the history of collecting old master drawings in The Netherlands. She teaches Renaissance and early modern European art history at the Middlebury Centre for Medieval and Renaissance Studies, Oxford.

Salvator Mundi: the journey of a false saviour