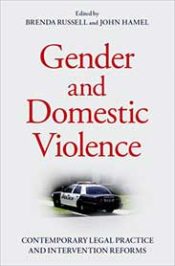 Until well into the 1980s, the problem of domestic violence, often referred to as intimate partner violence, or IPV, was considered a private matter, rarely talked about in public spaces, and under-prosecuted by law enforcement. Since then, laws have been enacted to protect victims and hold perpetrators accountable, and society has taken the problem more seriously, as evidenced by the proliferation of news stories on the topic.

Earlier this year, it was the trial of the actor Johnny Depp that caught our attention. This time, surprisingly, we learned about violence perpetrated by the female partner in the relationship. Violence within their relationship appeared to be bilateral (wherein both disputants participate in abusive behavior). Despite all the conflicting evidence of abuse and a judicial finding of culpability, Depp’s partner, Amber Heard continues to portray herself as the primary victim. In some quarters, the court’s findings were seen as a miscarriage of justice, a step backward in our common efforts to end domestic violence. Among others, it was proof that allegations of domestic violence cannot be trusted, especially by women, who are inclined to lie. So, which side is right?

The only reason for such polarization in a case that otherwise should never have gotten such scrutiny, is because most people—and not just the average citizen but, sadly, most policy makers and other stakeholders—hold mistaken and distorted beliefs about IPV. This is what some call the “gender paradigm,” which the Depp-Heard case put into question. This set of assumptions views IPV as a gendered problem, of men using physical and psychological aggression to dominate their female partners, either to maintain “male privilege” or due to jealousy or unresolved mental health issues. It also regards IPV as a unitary phenomenon of chronic, usually life-threatening assaults rather than the complex, heterogenous problem that it is. Most people don’t realize that the lifetime prevalence of IPV is 47.3% for women and 44.2%. Moreover, lifetime rates of IPV among gender minorities are similar or higher to that of heterosexual couples. Bisexual men and women experience the highest rates of IPV, and almost 44% of lesbians and 26-50% of gay males experience IPV. Moreover, while data on transgender individuals is scant, current research finds transgender and gender nonconforming individuals are 1.7 times more likely to experience any form of IPV compared to cisgendered and over two and a half times more likely to experience physical and sexual IPV over 50% have experienced IPV. Sexual minority youth have rates of physical and sexual IPV victimization higher than cisgender, heterosexual youth.

“The most accurate, up-to-date, statistics available indicate that in the United States, the UK, and Canada, women and men perpetrate physical and psychological IPV at similar rates.”

How is this an issue of male privilege or a gendered problem when rates of IPV are similar across gender, sexual orientation, or gender identity? Given the pervasiveness of the gender paradigm, it should be of no surprise that the reflexive response to the Amber Heard verdict among many who have dedicated their lives to protect female survivors of domestic abuse was to say, “They don’t get it.” Or: “victims should always be believed.”

Around the time that football player Ray Rice assaulted his wife in an elevator, an assault that was televised to millions, another NFL football player was stabbed in the neck with a screwdriver by his girlfriend, and almost no one heard about this incident. Most of us know some man, maybe even a family member, who has secretly been the target of abuse from a partner, who would be reluctant to share their experiences with anyone, much less initiate a call to the police. No surprise, therefore, that in some quarters the response to the Heard verdict has been to dismiss domestic violence as simply rich people arguing, and to regard all accusations as suspect and motivated by deceit. In other words, don’t believe women. Polarized reactions around domestic violence may now be akin to how our society has become politically divided in the broader sense.

Neither response is correct. The case of Johnny Depp and Amber Heard merely demonstrates that, indeed, women are capable of abusing their partners, and that like many men in denial, they often lie about it and attempt to portray themselves as victims. Although women are arrested at rates far less than men, the most accurate, up-to-date, statistics available indicate that in the United States, the UK, and Canada, women and men perpetrate physical and psychological IPV at similar rates, and that they are motivated for the same reasons—to control, out of frustration, to get revenge, and sometimes in self-defense. The research also finds that women and sexual minorities are far more likely to be sexually assaulted and, importantly, to incur the large majority of life-threatening injuries. It is also true that men, on the whole, due to cultural messaging requiring them to present a brave façade, are reluctant to identify as victims. It doesn’t help that when they do seek help, their concerns are typically dismissed or questioned. Similarly, sexual minorities face even greater obstacles such as heterosexist discrimination and are less likely to report IPV.

One may wonder, why is it such a big deal if a 6’2” guy is slapped by his 5’2” wife during a marital spat? Can’t he defend himself? If you put an average man in a boxing ring with an average woman, doesn’t the man “win” every time? The obvious problem with this analogy is that the settings and context in which couples argue, and sometimes come to blows, is far different. Most men are loathe to hit women, much less seriously injure them, due to codes of chivalry and the repercussions that would follow—not just the legal ones, but their diminished standing at home and in the community. While abusive men can instill greater fear of physical harm in their female victims, abusive women can, and do, instill in their male victims fear of being incarcerated, publicly humiliated, losing the children, and most of their assets in a divorce action. Furthermore, an abusive woman has the advantage of knowing that society is far more accepting of her behavior, and that she is far less likely to be arrested than a man for the same level of crime. Moreover, sexual minorities face additional fears. For example, gay couples involved in an IPV incident are often the same size and gender. Without the size and status differences, this often leaves law enforcement at a loss when trying to identify the primary or dominant aggressor, and unsurprisingly leads to more dual arrests. Sexual minorities also face a double dose of discrimination in terms of their sexual minority status and often fear reporting abuse will lead to their abusers “out” their sexuality or be treated poorly by law enforcement who rarely trained to respond effectively in such IPV incidents.

Still, if some domestic violence victims don’t get as seriously injured as their female counterparts, and often choose not to report assaults perpetrated against them, why should we care? Get to know the facts and you will know why. Without the same access to the peer-reviewed journals as university professors, the average person can look up the Partner Abuse State of Knowledge Project (PASK). In Gender and domestic violence: Contemporary legal practice and intervention reforms, the authors draw on the PASK findings, and other contemporary research sources, to explain why IPV is a human problem, not a gender problem, and why we should indeed care very much about male victims and female perpetrators. Here are some of the reasons:

Reducing rates of domestic violence in our communities requires a mutual effort on the part of all stakeholders involved, and it must be based on research and best practices. Proceeding otherwise is to show contempt for civil rights, putting a political agenda ahead of the well-being of children and families.

John Hamel, PhD, LCSW, is a graduate of U.C.L.A. and the University of Central Lancashire with more than 30 years clinical experience working with perpetrators and victims of domestic violence. He is also a researcher, having published over 40 books, book chapters, and peer-reviewed articles on this topic, provides professional trainings, and regularly testifies as an expert witness in both criminal and family law cases. For the past 12 years, he has been the Editor-in-Chief of the journal, Partner Abuse.

Dr Brenda Russell, PhD is a Professor of Psychology at The Pennsylvania State University, Berks. Her interests include psychology and law, perceptions of victims and perpetrators of domestic violence, homicide defendants, and the social-psychological aspects of jury decision-making. She has published dozens of scholarly research articles and authored four books. Dr Russell serves as an expert in criminal domestic violence homicide cases and works as a consultant and program evaluator for federal and state educational, law enforcement, justice, and treatment programs.

Unmanly men and the flexible meaning of kinaidos in Classical antiquity