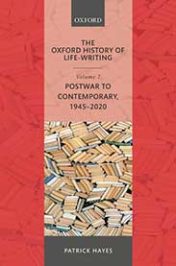 The Oxford History of Life-Writing: Volume 7: Postwar to Contemporary, 1945-2020

Oxford University Press has recently launched its new seven-volume Oxford History of Life-Writing in English. Three of the volumes are already in print, with the latest being my own, which covers the period from 1945 to the present day. This is the first time a history of life-writing on anything like this scale has been published, which begs the question—what is life-writing, and why does it matter?

Over the last few decades “life-writing” started to be used as an umbrella term for an increasingly eclectic range of literary forms and invested with a new level of cultural importance. Partly this was thanks to the various post-war social movements which have tried to recover the voices of marginalised people and repressed experiences. Historian E.P. Thompson spoke for many when he announced the ambition of rescuing subaltern forms of self-expression “from the enormous condescension of posterity.” And of course this effort of recovery involved looking well beyond the lives recounted in biographies and autobiographies, and even diaries; it opened up a vast literary netherworld of court reports, legers, household accounts, marginalia, and graffiti.

In a parallel shift, literary texts started to be read with more attention to the kinds of experience they disclose, or which they cannot help but repress. The formalistic training offered by university English courses seemed to the feminist poet Adrienne Rich far too limited: she emphasised the need to “find out what in fact had been the lives of our artists, what in fact had been the lives of our thinkers.” Literary writing also started to change, and demand new kinds of response. Poets such as Robert Lowell and indeed Rich herself disturbed the borderlines between high art and personal disclosure; critics started coining new terms like “autofiction,” “biofiction,” and the “non-fiction novel” to describe the range of inventive new forms which keep enlarging our idea of how a life can be written.

“Life-writing [is] … an umbrella term for an increasingly eclectic range of literary forms.”

But it would be wrong to picture life-writing just as a respectable intellectual phenomenon. Its rise to prominence was also driven by a changing publishing industry, where bigger marketing budgets and a need for bestsellers generated the “memoir boom,” as it became known. With its origins in the social tumult of 1960s America, the boom really took off in the 1980s and 1990s with an enormous expansion of life-stories by hitherto unknown people, ranging from the coming out memoir to narratives about illness and disability, and (especially in Britain, it would seem) the so-called “misery memoir”. While these stories were often moving and insightful in their own terms, they also served the infotainment industry’s growing need for author-celebrities—for writers comfortable being interviewed about their lives on popular formats like the Oprah Winfrey Show, or Richard and Judy.

The most recent boom in life-writing, which further expanded the meaning of this term, came in the early years of the new millennium together with a new phase of consumer capitalism. Social media platforms brought a rapid growth in channels for written self-expression, from tweets and text messages to blogs and Facebook posts. The writing of one’s life became no longer something done mainly by important individuals who wrote an autobiography, or by sensitive souls who kept a diary, or even by people with interesting problems or adventures to share. Life-writing is now a truly ubiquitous phenomenon, part and parcel of the everyday formation of identity.

While there is certainly much to celebrate in these developments, the rise of life-writing in the post-war years is clearly bound up with changes in modern identity and in our wider commercial environment that are in many ways also quite troubling. In writing my volume of the Oxford History, I formed the view is that this remarkable phenomenon needs to be appreciated through a wide-angle lens that can take in a properly ambivalent response to its achievements.

“Life-writing of [the post-war] period … played an essential part in expanding and enriching what it means to pursue self-fulfilment.”

On the one hand, life-writing of this period can be credited with having played an essential part in expanding and enriching what it means to pursue self-fulfilment. With the easing of censorship, including self-censorship, and the increasing frankness of public disclosure that resulted, it contributed greatly to the broad social process which sociologist Anthony Giddens named “the transformation of intimacy.” Texts as diverse as confessional memoirs, lyric poems, and therapy manuals have brought what goes on inside human relationships to an unprecedented level of public scrutiny, helping to challenge and revise some of the more egregious imbalances of power. The popular dissemination of life-writing has been central to the reimagining of gender roles and the rethinking of sexuality; it has played a part in the claiming and redefining of ethnic or racial identities, and in revising our understanding of what it means to have a disability or an illness. Testimony narratives became important within various processes of historical redress, raising consciousness and generating empathic connections with the victimised and the oppressed. And many people have come to understand life-writing as having a significant therapeutic potential: learning to identify yourself with a narrative that explains what kind of person you are, and what kind of journey you are on, became essential to the ethos of empowerment which modern ways of thinking about selfhood have tended to enshrine.

“But the same processes that have transformed intimacy … also possess a considerable power to reify human experience into packaged identities.”

But the same processes that have transformed intimacy, redefined possibilities for self-expression, and started to manage our lives in various therapeutically improving ways, also possess a considerable power to reify human experience into packaged identities and unilluminating moral categories. As the language of therapy seeped ever further into the everyday, its process of self-scrutiny brought with it a rationalisation of the inner life with every bit as much ability to banalise as empower. As our intimacies become more visible and better-analysed they could also become colder, and a slick over-commodified quality started to inhabit certain kinds of modern subjectivity—both in writing and in life. While the memoir boom helped to democratise who gets to have their life-story told, it also encouraged identification and emotionalism as a way of learning about the historical past and thinking about social problems. It helped create a sentimentalised public discourse which distracts and trivialises at least as much as it informs. Glossy and ephemeral forms of life-writing started to circulate on an enormous scale, and literary culture became increasingly saturated by the celebrity industry: serious authors are now obliged to find ever more inventive ways of fending off its power to domesticate and neutralise their writing. And with the rise of the new social media platforms, such as Facebook and Twitter, there emerged an equally new potential for human personality itself to be commodified, for people to be constituted as marketing objects by our “likes” and “dislikes”.

So, while life-writing has become ever more culturally significant over the last few decades, it is likely that self-knowledge remains every bit as rare, as compromised, and as difficult of achievement as ever before.

Patrick Hayes is Associate Professor of English, Fellow of St John's College, University of Oxford, where he teaches literature from the Romantic period to the present day. He specializes in modern fiction, poetry, and life-writing. Previous work includes J.M. Coetzee and the Novel (Oxford, 2010), Philip Roth: Fiction and Power (Oxford, 2014), and an edited collection about the relationship between literature and philosophy, entitled Beyond the Ancient Quarrel (Oxford, 2018).

Hayes is the author of The Oxford History of Life-Writing: Volume 7: Postwar to Contemporary, 1945-2020 from the Oxford History of Life-Writing series. Edited by Zachary Leader, books in the OHLW series each provide a selective survey of the range of life-writing in a given period with particular focus on the most important or influential authors and works within the genre.