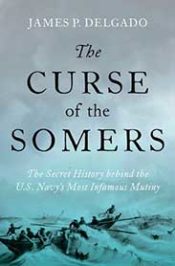 The Curse of the Somers: The Secret History behind the U.S. Navy's Most Infamous Mutiny

One hundred and eighty years ago, Captain Alexander Slidell Mackenzie, in command of the United States Navy’s brig Somers, hanged three of his crew on the high seas in the mid-Atlantic. The captain accused the three of mutiny, of conspiring to kill him, his officers, and many of his crew, most of whom were boys. A ship full of pre-teens and teenagers, led by a few adults, Somers was no ordinary warship. It was a floating experiment, a school ship, sent out on this, its first voyage, in 1842 to train boys to become men, to become sailors. But the voyage went badly. It ended with death, recriminations, trials, and law suits, and controversy that continues today.

The “Somers Affair” shocked a nation then in the midst of an economic depression that had lasted for five long years, ruining families and filling the streets with homeless families and orphaned or abandoned children. National arguments over the nature of what it meant to be American, how Americans should live their lives, and most importantly, the direction the country should go in were the subject of intense debate. This was a time marked by the birth of movements seeking to reform the moral character and nature of American society, with arguments for public schools, equality for women, an end to slavery, and a national move to ban alcohol. Unhappy with organized religion, a number of Americans were turning to newly defined faiths. Protracted political turmoil was threatening the hold of old political alliances and parties. There were fears that a vast conspiracy led by the Masonic Order was acting as a cabal to run (and ruin) the nation. All of this made the United States in 1842 a nation as divided and fearful of its future, some might say, as it is in 2022.

Then came the “Somers Affair.” It was more than a scandal that played out in the press of its time. Somers had been built as a vessel to reform the navy through the adoption of social experiments then being argued for by social and religious reformers. The experiment on Somers as a “proper” ship run to the principles sought by those reformers had dramatically failed. The executions shockingly demonstrated the failure of authority; the Captain had been on the brink of losing his ship, or he had never fully asserted his command through leadership, and only took control through violence in the name of stopping violence.

The questions that were debated and litigated centered on both whether Mackenzie possessed the authority to do what he did, but also on the question of if he had the authority, did he do the right thing? The answer is he had the authority, but that he failed in his command to do the right thing long before the hangings. The executions were his tacit admission of failure and of weakness, not of strength. While he had powerful defenders, Mackenzie also had powerful and intelligent detractors, including John Canfield Spencer, the Secretary of War, himself the son of the former Chief Justice of the New York Supreme Court. The lead “mutineer” Mackenzie had hanged was the Secretary of War’s 19-year-old scapegrace son, Philip Spencer. As an anguished but enraged father, John Canfield Spencer penned a widely published letter damning Mackenzie’s near-panicked, “unmanly” hanging of the three “mutineers,” and for good reason. He made a case that Mackenzie could have asserted his authority without executions and brought the “mutineers” home to face trial. Mackenzie was not alone in his failure to have avoided the terrible consequences of the voyage of Somers.

Philip Spencer also bore a heavy responsibility for his own execution as well as that of the other two “mutineers” and the arrest of a number of other boys. Philip Spencer arrived on Somers with a long history of misbehavior and petty crimes. As the youngest, coddled son of a distant and harsh father and an adoring mother, early introduced to alcohol by his older brothers, he was wont to flaunt the rules and defy authority wherever he went and whenever he pleased.  He had nearly been thrown out of the US Navy twice, but his father’s influence had kept him in. Assigned to Somers, newly built as a sail training vessel to take boys considered “the sweepings of the street,” including orphans and the poor sons of a nation ravaged by a long economic depression, Philip Spencer did not fit in to a small, over-crowded vessel run by a captain in his first sea-going command, with a group of young officers, nearly all family or friends, and insufficient older hands to teach the boys—and properly discipline them.

The voyage of Somers was one of exceedingly harsh discipline, with boys beaten for infractions that ranged from not being fast enough, or disorderly and not clean or neat enough, for rebellious adolescent behavior, and for masturbation. Spencer was disliked by his fellow officers but admired by a number of the boys, for whom he made a show of mocking the captain behind his back, calling Mackenzie a humbug and an ass. He gave boys alcohol and tobacco, both of these forbidden by a morally indignant Mackenzie, and likely had sex with at least one or more of the boys.

In the end, Spencer’s undoing was being on a ship too small for both the “base” son of a prominent man who Mackenzie strongly felt had squandered his social advantages, and Mackenzie, a self-made son of a working-class soap and candle merchant. Mackenzie had risen to his rank through his marriage into a prominent naval clan, engaged in a career as a writer of “witty” travelogues, and changed his name to inherit the fortune of a maternal uncle. Mocked, disobeyed and undermined by a 19-year-old who defied authority, and who was quietly his social “better,” Mackenzie, when confronted with a tale of Spencer confiding a secret plan to seize Somers and turn it into a pirate ship, at first could not believe the tale and then confronted the lad with a cold, increasing fury born of indignation and deep personal insult.

“It was but a joke,” Spencer averred, but as the captain noted, joking on a forbidden subject and one that could cost Spencer his life. John Canfield Spencer would later argue that this was the “heedless romance” of a school boy, not a capital crime. Seeing evidence of conspiracy all around him—Mackenzie believed Spencer had corrupted both some of his men and a number of the boys—Mackenzie hastily assembled a shipboard court martial and badgered his officers until they voted to convict Spencer and two other older men, Elisha Small and Samuel Cromwell, as leading conspirators, and then quickly hanged them.

The events on Somers inspired strong reactions, bitter arguments, and also led to Herman Melville, cousin of Mackenzie’s chief officer, Lt. Guert Gansevoort, to utilize Somers as the background of his novella, Billy Budd.  The “Somers Mutiny” led the Navy to assign Somers to regular sea duty and in time to create the United States Naval Academy. Seemingly cursed and reputed to be haunted by the ghosts of the three hanged men, Somers sank in sudden gale off the coast of Mexico in 1846 with a number of the crew. While the story of the ill-fated cruise and the clash between Spencer and Mackenzie continually resurfaced in news stories and books for more than a century afterwards, it was a matter of professional courtesy that naval officers of the period never discussed the case. It became a forbidden, “secret” subject. Nonetheless, the story perseveres, because what is past is prologue, and as I assert in my book, the struggles and arguments of nineteenth-century America are not so distant or different from the America of the twenty-first century.

James P. Delgado is Senior Vice President of SEARCH, Inc., the leading cultural resources firm in the United States. Before that, he was Director of Maritime Heritage for the National Oceanic and Atmospheric Administration and President and CEO of the Institute of Nautical Archaeology (INA). He was also host of the National Geographic international television series “The Sea Hunters” featuring best-selling author Clive Cussler. His most recent book "The Curse of the Somers" (OUP 2022) explores the secret history behind the Somers Affair.