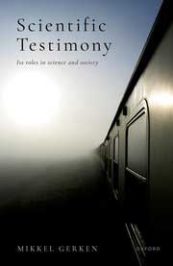 Science skepticism is a central threat to deliberative democracy. Generally speaking, scientific investigations based on collaboration between scientific experts are far more reliable than individual efforts when it comes to finding the truth about complex matters. So, since public deliberation is better off when it rests on science, deliberative democracy requires a reasonably high degree of public uptake of science communication. However, there is a great deal of public skepticism toward science communication about polarizing issues (e.g., vaccine safety, climate change). Just consider slogans such as the conspiracy organization QAnon’s “do your own research.”

To see which aspects of scientific testimony I will consider on this occasion, have a look at this map of types of testimony from the book:

So, I have developed some general science communication strategies and norms that aim to alleviate these problems for deliberative democracy. For example, the following Justification Explication Norm (JEN):

Public scientific testifiers should, whenever feasible, include appropriate aspects of the nature and strength of scientific justification, or lack thereof, for the scientific hypothesis in question.

The argument that JEN is a sensible presentational norm for public scientific testimony is supported by both philosophical reflection and empirical research on science communication. For example, some empirical evidence suggests that explicating scientific justification may increase the uptake of polarizing hypotheses across the political spectrum. Moreover, I argue that JEN promotes long-term trust in science and may contribute to the public’s science literacy.

On the basis of these ideas, I have developed epistemic norms for both the producers and consumers of public scientific testimony. I will not discuss the details of these norms here (which are outlined in chapters five and six of Scientific Testimony). Rather, I will discuss a question that they raise: Whose responsibility is it that laypersons appreciatively defer to public scientific testimony? In Scientific Testimony, I argue for the following distribution of normative requirements:

According to the TOP structure, selective science skepticism should be treated as a structural problem that requires societal interventions. That is, the pyramid structure illustrates two things: First, the noted distribution of normative labor. Second, the idea that the individual norms that apply to public scientific testifiers and their recipients must rest on a structural foundation that society is obliged to secure. For example, even impeccable public scientific testimony from scientists and journalists will be severely compromised in an informational environment that is polluted with pseudo-scientific testimony that is indiscernible to laypersons.

In consequence, the foundational societal obligations involve curating the information environment, advancing scientific literacy, and training public scientific testifiers in communicating science about polarizing issues. The TOP illustration, then, provides a warning of individualizing structural problems. More generally, Scientific Testimony is a book that exemplifies how empirically informed philosophy may contribute to diagnosing and addressing science skepticism and similar threats to the pursuit of deliberative democracy.

Mikkel Gerken is a Danish philosopher. His recent research concerns epistemology and philosophy of science but it is often integrated with theories of language and communication, cognitive psychology, philosophy of mind, and philosophical methodology. Professor Gerken was an Associate Professor at the University of Edinburgh before returning to his native Denmark, where he is now a Professor at the University of Southern Denmark. He is an associate editor of Ergo - an open access journal of philosophy. He has been William H. Bonsall Visiting Associate Professor at Stanford University. He was an elected member of The Young Academy under the Royal Danish Academy of the Sciences and was awarded a Young Elite Researcher prize from the Danish Council for Independent Research.