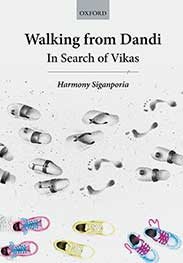 Walking From Dandi: In Search of Vikas

Harmony Siganporia retraces the route of Mahatma Gandhi's Salt March, in reverse, by walking this route of just under 400 kilometres under 25 days much as Gandhi and the original band of marchers had done in 1930.

I have a favourite volume of the Collected Works of Mahatma Gandhi (CWMG): number 98, the Index of Subjects. I’ve made my way through it often over the past few years—sometimes purposefully; sometimes without an agenda—coming away more firmly convinced each time of one simple truth: Gandhi is the binary opposite of a monolith. No single story can ever contain the multitudes he was and continues to be to those of us who flock to him still. He retains the ability to surprise with the catholicity of his interests, and—to my mind, exquisite—ability to synthesise copious amounts of information and ideas gleaned with scant regard for trifles like academic disciplines or geographies.

To illustrate this, one example should suffice. While working on Walking from Dandi: In Search of Vikas, I spent some time with volume 98 when I was attempting to decipher the aesthetics of Gandhi’s walks. I started by reading through the entries under “art” (according to the CWMG, he doesn’t seem to have used the term “aesthetics”). The first entry under this heading—indexed perfectly as pertaining to art and “beauty”—fairly took my breath away. Now I’ve read my Gandhi: admired and argued in equal measure with the obduracy (and didactic albeit prophetic quality) of Hind Swaraj (1909/1910); read on in fascination as the page-turning entertainer that is Satyagraha in South Africa (1928) played itself out; walked with him in growing companionship through the aching honesty of the Autobiography, which I read in Mahadev Desai’s soaring translation (1929), and while I’ve always found his writing incredibly coherent and often inspired, I haven’t necessarily thought of it as lyrical. I realise now that this is because I had not known where to look for such a vein tapping into the sublime before I found the entry on art and/as “beauty.”

The setting is this: it is early 1925, and Gandhi is undertaking multiple “tours” around the Gujarat region. The following extract is from his “Notes” about a series of conferences he has recently attended around Vedchhi. He goes into what can only be described as raptures over the arrangements for the Kaliparaj Conference:

I cried out unwittingly: “I have seen many conferences, but in point of unstudied beauty, I have not seen one like this.”…It seemed as if nature herself had invisibly arranged everything. In my opinion, true art consists in learning from nature without struggling against it…Ordinarily a field is chosen as the site of the Conference. Our artists looked around and chose a spot which was filled with natural beauty. A river named Valmiki flows near Vedchhi. It dances along between rows of hills adorned by trees…The main rostrum was placed in the flowing water and, just as branches spring out of a tree, the seats for the delegates were arranged in front of the main rostrum. As it was winter, and, moreover, as the water was cool, this artistic expert argued that not only did the delegates not require any shade but the afternoon sun at 2.00 p.m. would be welcome to them, hence the golden sky provided the dome of the pavilion and the river sand, the seats…The canopy above the rostrum was made of bamboos and green leaves. A broad pathway led right up to the rostrum. Bamboos had been used for this purpose too and creepers of the arum plant had been entwined on the path. The first step leading to the rostrum was made of a sack filled with sand. There was not a single picture here and not a single strand of cotton was used for decorative purposes. One need not add that even decorations made of yarn cannot enhance the beauty of such a spot. Yarn is man-made and is in place in a house. Where the sky is the ceiling and sand the ground, only trees and leaves harmonize with the scene.

Who is this poet, even? There is nothing staid or inscrutable about the writer’s feelings. This passage is why, when I read about Gandhi (even as he was beautifully described as a proto-environmentalist) as being someone who was too “practical” to have the kind of feel for the natural world which marks the work of other writers who have thought closely about this earth, and all us upon it (Guha and Martinez-Alier make this argument in their seminal Environmentalism of the Poor), it struck me as sounding incomplete. It is true that Gandhi isn’t given to routine outbursts such as the one I cite above. But they are there, if we follow the strand that leads us from art as one node to nature as another, with beauty as the bridge that brings them into conversation.

In this conception, nature is not a background against which life is lived and conferences are organised; neither is it merely a “resource” to be extracted for human “use.” To read these downright poetic invocations is to trace the webs of Gandhi’s weaving. This we can do when the light catches these seemingly diaphanous motifs just so, stretching out in the form of volume 98, for example. They are how we get from Henry Salt (proponent of animal rights and ethical vegetarianism who befriended Gandhi as a young student in London) to Dandi; from Ruskin—whose Unto This Last was fundamental to Gandhi’s conception of the self-sustaining social unit—to Sabarmati ashram; the Bible to the Gita; and, “true music” being implicit in “khadi and the spinning wheel,” which Gandhi said in a speech for the National Music Association in 1926. They are how we learn that there is also music in walking, and that to walk is to think and en-act change which can only come from “turning the searchlight inward” (the title—and thrust—of one of Gandhi’s most evocative Dandi March speeches in 1930)—for what is the worth of “raj” of any kind without the necessity of owning up to the self-reflexive “swa” prefacing it? There is music in his swaraj, and this is what it sounds like.

Anyone who would walk with the old man awhile would do well to play with Volume 98. What is uncertain is where you’ll go. Or how you’ll get there. But wander yet, for there are to be found here domes of golden skies, and if you’re lucky, trees and leaves harmonizing with the scene, reminding us to tread lightly upon this earth, and bidding us that we calibrate anew our relationship with kin, in all forms of life.

Harmony Siganporia is an Associate Professor of Culture and Communication at MICA, Ahmedabad.

The Mahatma and the Policeman: how did George Orwell view Gandhi?