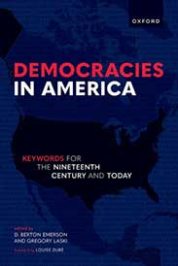 Democracies in America: Keywords for the 19th Century and Today

One week before the 2022 US midterm elections, President Joseph Biden delivered a prime-time address at Union Station in Washington, DC. The 2 November 2022, speech came amid widely reported attempts at voter intimidation and political violence, most notably in the 28 October in-home attack on Paul Pelosi, husband of Speaker of the House Nancy Pelosi.

These were the immediate occasions for the president’s remarks, which framed our present as a “defining moment.” But Biden suggested that something more foundational, more fundamental, was at stake. He reminded listeners of the definition of democracy.

That definition seems basic—but it is far from easy or uncontroversial. Twitter lit up with assertions that the United States is a “constitutional republic,” not a “democracy.” Such fighting is perhaps one of the inevitabilities of any social media platform. Arguments over basic definitions have established themselves as a defining mark of US democracy of late.

Our current state of affairs is no doubt cause for urgent concern. If we have no shared values, or refuse to accept electoral defeat and abide by the constitutionally mandated peaceful transfer of power, we are surely in trouble. Still, US history provides myriad evidence that such conflicts over basic definitions and pathways of implementation stand as enduring dilemmas of democracy across time.

In fact, arguing over who we are—what democracy means—is part of democratic deliberation itself, a necessary component of American civic life and civic education. When the Educating for American Democracy (EAD) initiative sought to create a roadmap for excellence in history and civics, a fundamental dilemma was how to refer to the “United States”: Was it a republic or a democracy?

“Arguing over who we are—what ‘democracy‘ means—is part of democratic deliberation itself.”

The question has served as more of partisan red-herring than anything else. (Both terms were used at the founding.) But its persistence matters insofar as the language here raises concerns about basic values and tensions among them, between “populist and elitist representative form of governance,” as EAD Steering Committee Chair Louise Dubé has put it.

We tend to think of civics as the domain of history and political science. These fields—and many others—are certainly central. But as the president’s speech revealed, language is a crucial, if often neglected, component of democratic life.

As we contend in Democracies in America: Keywords for the Nineteenth Century and Today, “democracy as an ‘unsettled idea,’ full of contradictions and perhaps irresolvable dilemmas, is not a bad thing. To the contrary, that condition of unsettlement is precisely what facilitates debate and discussion, contestation and conflict, hopeful revision and powerful protest: in short, the very lifeblood of democratic philosophy and practice.” The work of defining democracy should not mean coming up with one fixed meaning about terms such equality or representation; deliberation matters. Moreover, doing this work requires a deliberate meditation on what democracy and related concepts mean and might mean.

Even as deliberation and contestation remain inherent to democratic systems, we likewise recognize, especially in our current moment, the need for shared values, the common purpose of citizens sharing the rights and responsibilities of our collective lives together.

In a recent report, composed of 31 recommendations for the reinvention of American democracy in the twenty-first century, the Commission on the Practice of Democratic Citizenship acknowledges that “citizenship can be understood broadly in two ways.” In one sense, citizenship designates “a formal status within a state that affords political participation, including the vote, and implies certain obligations of engagement or participation in state activities.” More broadly defined, “citizenship is an ethical notion,” not bound to legal status. “It centers on participation in common life, contribution to the common good, and a spirit of obligation to interests greater than one’s own.” The Commission acknowledges that this second definition is contested territory, but they are not alone in thinking that we all benefit when we find common ground with all of our neighbors as we navigate the challenges of shared living.

That common life was something that Biden was calling all of us. “For democracies are more than a form of government,” he remarked. “They’re a way of being, a way of seeing the world, a way that defines who we are, what we believe, why we do what we do.

Especially at a time when it seems like many Americans simply aren’t speaking the same language, we would do well to remember this deliberative ideal, and return to the very words that divide and, perhaps, unite us.

D. Berton Emerson and Gregory Laski are co-editors of Democracies in America: Keywords for the Nineteenth-Century and Today. The book brings together a diverse group of intellectuals to reflect on twenty-five key terms that offer us a language to deliberate about the possibilities and problems of democracy in America, past, present, and future.

D. Berton Emerson is Associate Professor of English and Director of the Honors Program at Whitworth University in Spokane, Washington. His writing has appeared in American Literature, ESQ, Nineteenth-Century Literature, and the Los Angeles Review of Books. He has participated at various levels with the work of the Commission on Democratic Citizenship, sponsored by the American Academy of Arts and Sciences, and he is currently working on a book manuscript titled American Literary Misfits: Vernacular Aesthetics and Alternative Democracies, 1830-1860.

Gregory Laski is the author of Untimely Democracy: The Politics of Progress after Slavery (OUP 2017), which won the American Literature Association's 2019 Pauline E. Hopkins Society Scholarship Award. Formerly a visiting faculty member at Carnegie Mellon University, he is currently a civilian associate professor of English at the United States Air Force Academy, where he co-founded the American Studies program. He was a Mellon Fellow at the Newberry Library in 2021-22 and is at work on an intellectual history of revenge in the Reconstruction era. He holds a PhD in English from Northwestern University.