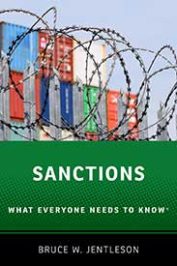 Sanctions: What Everyone Needs to Know®

Even before the extensive economic sanctions against Russia for its 2022 invasion of Ukraine, it was hard to browse the news without seeing reports of yet another imposition of sanctions by one country or another.

The United States uses sanctions so much they’ve been dubbed “the Swiss army knife” of American foreign policy, different Presidents varying more in how they use sanctions than how much. While China continues to be resistant to being targeted with sanctions over human rights, as its economic power has grown it has become a frequent wielder of sanctions of its own. One study identified 19 cases of China-imposed sanctions between 2010 and 2020, half of which were since 2018. Russia is retaliating against the US and Europe with its own energy sanctions and other countersanctions. In recent years, the European Union has been second only to the United States in sanctions frequency. The United Nations, which only imposed sanctions four times in its first two decades, has done so over 40 times since then.

With such frequency of use, you’d think sanctions were a sure-fire weapon. Yet there is lively debate over their success rate. One study puts success at 22%, another at 34%, another at 44%. Another study concludes that compared to military force sanctions have “little independent usefulness.” On the other hand, there is a view among some scholars that sanctions success gets “systematically underestimated” by studies that “accentuate the negative and downplay the positive aspects.” I know from my own experience serving in the US State Department and in other policy roles that policymakers often see sanctions as a weapon of choice.

So, some initial puzzles: why are sanctions used so much? What are their varieties? How to measure success? What key factors affect their success? What lessons can policymakers derive for why, how, and when to wield sanctions? In my work, I have addressed these and other fundamental questions about sanctions both historically and today.

“The gains from taking a principled stand have to be weighed against the ramifications of doing so, manifesting the ethical dilemma of right intentions but wrong consequences.”

In assessing sanctions success, it’s especially important to bear in mind that while some success is inherent in the very imposition of economic costs, even substantial costs do not always lead to policy compliance. Cuba has borne American sanctions for over half a century, yet the regime has stayed very much in place. Sanctions against North Korea have imposed plenty of costs, but its nuclear weapons programs have grown ever bigger. US-led sanctions have hit Russia hard, but Putin has kept the Ukraine war going and is retaliating with natural gas countersanctions against Europe.

Even when sanctions do achieve some “political gain,” they can also inflict “civilian pain” with humanitarian consequences so severe as to raise fundamental ethical questions. On the one hand, how could the US and EU not impose sanctions on the Myanmar military amid its brutal February 2021 coup? On Syria for Bashar Asad’s atrocities? Shouldn’t brutalizers be made to pay a price? Yet in both those cases sanctions have ended up misfiring in hitting the populace more than the regime. In such instances the gains from taking a principled stand have to be weighed against the ramifications of doing so, manifesting the ethical dilemma of right intentions but wrong consequences.

To the extent that sanctions do succeed, three factors—multilateralism, proportionality, and reciprocity—generally prove key.

Broad multilateral support helps limit alternative trade partners to which the sanctioned state can turn. Sanctions mandated by the UN Security Council have this advantage, albeit in some instances this gets impinged by loose enforcement against sanctions busting. While the sanctions against Russia over Ukraine do not have a Security Council mandate, the coalition supporting them is among the broadest ever assembled. Even with China, India, and some other countries providing Russia with some alternative trade, the economic impact has been considerable.

Given that sanctions are a limited coercive means—no sanctioned country has ever just said “uncle”—their success is more likely for proportionally limited objectives. Contrast, for example, the Obama Iran sanctions succeeding in helping get the nuclear non-proliferation agreement but the Trump sanctions, despite having even greater economic impact, failing to set off the regime change it sought.

Reciprocity linking sanctions and inducements also increases chances of success. This entails diplomatically playing a sanctions-strengthened hand for favourable, but still somewhat reciprocal, terms. The 2003 deal US and British negotiators struck (including William J. Burns, then-Assistant Secretary of State and now CIA Director) with Muammar Qaddafi’s Libya provided sanctions relief in exchange for terrorism concessions and WMD dismantling, the significance of which became especially evident amidst the 2011 Arab Spring chaos and the instability since. Striking such a balance on Russia-Ukraine, being sufficiently punitive to have US, European, and Ukrainian support, while still providing a basis for Putin or any Russian leader to agree, will be particularly tough.

Within this overarching framework patterns emerge in how different sanctioners wield their sanctions. The objectives for which the Biden administration uses sanctions differ somewhat from the Trump administration, but its frequency of use is even greater. Along with Beijing’s officially promulgated sanctions, what’s particularly interesting in China’s use of sanctions is its more informal “cueing” through signals for social media outrage and consumer boycotts against “anti-China” countries and companies. Russia is betting heavily that its energy countersanctions will win the current economic war of attrition. The EU is making sanctions a major tool of its Common Foreign and Security Policy. The UN is working to improve the roles of its Panels of Experts and Sanctions Monitoring Committees for more effective enforcement.

All told, it’s a pretty sure projection that sanctions are here to stay—making both scholarly theorizing and policy strategizing all the more important going forward.

Bruce W. Jentleson is William Preston Few Professor of Public Policy and Professor of Political Science at Duke University, as well as a 2022 Distinguished Fellow of the Woodrow Wilson International Center for Scholars and Non-Resident Senior Fellow at the Chicago Council on Global Affairs. He is the author of Sanctions: What Everyone Needs to Know® (OUP, 2022). Follow him on Twitter.

The Ukraine invasion: wrestling at the edge of the nuclear cliff