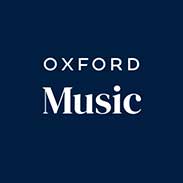 Learn more about the composer's life, explore the complete catalogue of his works, and discover new arrangements recently published by Oxford Music.

For any classical music publisher working up until the middle years of the twentieth century, and even later in many cases, paper was the primary means of dissemination for the sheet music and scores. Digital, and even photocopying, were still far ahead on the horizon, and making copies of anything required manual labour and pen and ink. All composers would write their compositions out by hand on music manuscript paper (the “autograph manuscript”); copies required for the first and other early performances would be copied out by music copyists, again on manuscript paper; a music engraver would work either from the autograph manuscript or from a marked-up copyist’s score to produce the plates required for printing; proofs would be produced, run off from the plates; and finally, after any corrections had been made, paper copies would be printed and bound, for sale or for hire. If the composition involved an orchestra the separate orchestral parts required for individual players would also be copied out, by hand, and in many cases later engraved and printed.

Much of the material produced for these processing purposes was regarded as ephemeral (the copyists’ scores, the proofs), but where it survives the items collectively will often shed fascinating light on the story of the music’s composition and the early performances—how a particular work journeyed from the mind and imagination of the composer into the hands of players for a live performance, and something of the individuals that enabled that to happen (the editors, the conductor, the performers). There is a “geological layer” aspect to much publishing ephemera, stories quietly sitting and awaiting discovery and telling.

Ralph Vaughan Williams was one of the most celebrated British composers of the twentieth century, and Oxford University Press was his principal music publisher from 1925 until his death in 1958. For Vaughan Williams, OUP published six of his nine symphonies, choral and instrumental works, hymns, carols, operas, and ballet—all of this music was initially made available using the processes described. After Vaughan Williams’s death, much of the surviving archival material was retained by OUP and held in storage.

In October 2022, as musicians across the world mark the 150th anniversary of the composer’s birth, these materials are to be moved to the British Library, where they will join the Library’s existing world-class collection of Vaughan Williams autograph manuscripts, papers, letters, photographs, and other materials—the most comprehensive collection relating to this composer in the world.

The OUP donation covers approximately 60 items, each one of these demonstrating some part of the publication process. Here, we explore a selection of the items, each telling a story from Vaughan Williams’s musical career.

Simon Wright is Head of Rights and Contracts at Oxford University Press in the Sheet Music department.

Memorable years, formative years: why do boys stop singing in their teens?

Eight composers whose music we should know