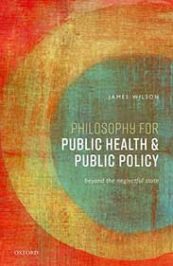 Philosophy for Public Health and Policy: Beyond the Neglectful State

James Wilson is Professor of Philosophy at University College London, and co-director of the UCL Health Humanities Centre. He has been a member of advisory groups to the National Health Service on data collection and data access, and he serves on the National Data Guardian’s steering group. James is interviewed here by Peter Momtchiloff, philosophy editor at OUP.

“Public health” is a familiar phrase in our everyday lives now. Do you think philosophy has been a bit slow to get to grips with public health? I note that the journal Public Health Ethics was only founded in 2008.

Philosophy, along with bioethics, has definitely been slow to address public health. Leading political philosophers of the previous generation, such as John Rawls, now often seem simply naive or poorly informed when they address health. Usually they don’t address the literature on the social determinants of health at all. Some topics such as risk imposition, which are foundational for work on the philosophy of public health, have become mainstream within philosophy only in the past 15 years.

How do philosophical issues to do with public health differ from typical issues in medical ethics? Is it particularly a case of going beyond the ethical?

Work in medical ethics and bioethics has often been very individualistic, focusing on questions such as doctor-patient relationship and informed consent in medical research. Public health focuses attention on what societies as a whole do to protect the health of populations. Public health ethics requires us to think about the design of institutions, but it’s vital we don’t forget that those helped or failed by institutions are individuals. We need to integrate the ethical and the political, rather than going beyond the ethical.

“Trustworthy communication over the long term establishes high levels of public trust and citizens are likely to adhere to government guidance.”

You have worked on government healthcare advisory groups. Have you formed any general thoughts about how government can communicate better with citizens about public health?

Public health practice much more often aims to steer citizens’ behaviour by informing and persuading than via direct coercion. How governments communicate makes a significant difference to outcomes. Trustworthy communication over the long term establishes high levels of public trust, and citizens are then much more likely to adhere to government guidance. This requires honesty, integrity, and consistency from government ministers. It’s much easier to lose trust than to regain it.

Do you think there is a valuable role for “nudging” or other non-transparent methods of managing public health?

Nudging alone is unlikely to shift the dial on structural causes of inequities in health, so it would be a dereliction of duty for public health policy to deploy only nudges. Nudges can nonetheless be useful. Some public health nudges can be cost-effective and obviously beneficial—such as the rumble strips that provide tactile feedback to an inattentive driver who wanders out of their line. What matters most is how publicly defensible the rationale for the nudge is, and if a nudge is the best solution for the public health problem in question.

How did the impact of COVID-19 affect your writing of the book?

The complete manuscript was already with OUP by the time COVID-19 struck. I argue that philosophers can’t do philosophy well unless they engage with complex real-world cases, and so COVID-19 provided a powerful test for the adequacy of the book’s analysis. In the first wave, I was able to use the book’s ethical framework in providing urgent ethics advice on resource allocation and data ethics to a range of public institutions. After this, I spent a few months trying to work out what needed to change in my arguments. It became clear that the pandemic had, if anything, vindicated the complex systems approach I’d argued for in the book. This focuses on how change and dynamism occur continually at all levels relevant to public health, and why we should expect change to be mediated and shaped in real time by structural injustice.

Do you think COVID-19 will have made it easier or more difficult for governments to promote public health?

COVID-19 has given us precedents of governments doing extraordinary things to protect public health. Three years ago, nobody would have anticipated that our governments would criminalise everyday activities such as going to see your parents, or that most people would agree that this was a fair way of distributing the burdens of risk reduction.

Given the volatility of politics at present, it’s too early to say which framing will win out. One thing philosophers can do to help is to articulate the case for public health in a way that’s accessible even to those suspicious of the state, as my book attempts to do.

James Wilson is Professor of Philosophy at UCL, where he is also co-director of the Health Humanities Centre.

He has been at UCL since 2008, with a secondment to the Royal Society as a Senior Policy Adviser in 2011-12. His research uses philosophy to help resolve practical problems, and also uses practical problems to investigate gaps and weaknesses in existing philosophical theories. He has published widely on public health ethics and health policy, and also on the ownership and governance of ideas and information. Among other advisory roles, he is a member of the National Data Guardian's Panel.