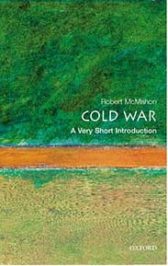 This October marks the 60th anniversary of the Cuban Missile Crisis, a tense political and military standoff between the United States and the Soviet Union at the height of the Cold War.

To mark the anniversary, we’re sharing some of our latest history titles on the Cold War for you to explore, share, and enjoy. We have also granted free access to selected chapters, for a limited time, for you to dip into.

The Cold War dominated international life from the end of World War II to the fall of the Berlin Wall in 1989. But how did the conflict begin? Why did it move from its initial origins in post-war Europe to encompass virtually every corner of the globe? And why, after lasting so long, did the war end so suddenly and unexpectedly? Robert McMahon considers these questions and more, as well as looking at the legacy of the Cold War and its impact on international relations today.

Read a free chapter: From confrontation to détente, 1958–68

Both conservative and liberal Baby Boomers have romanticized the 1950s as an age of innocence—of pickup ball games and Howdy Doody, when mom stayed home, and the economy boomed. These nostalgic narratives obscure many other histories of postwar childhood, one of which has more in common with the war years and the sixties, when children were mobilized and politicized by the US government, private corporations, and individual adults to fight the Cold War both at home and abroad.

3. Imagining the World from Behind the Iron Curtain: Youth and the Global Sixties in Poland by Malgorzata Fidelis

The Global Sixties are well known as a period of non-conformist lifestyles, experimentation with consumer products and technology, counterculture, and leftist politics. But contrary to public perception, the Iron Curtain was hardly a barrier against outside influences, and young people from students and hippies to mainstream youth in miniskirts and blue jeans saw themselves as part of the global community of like-minded people as well as citizens of Eastern Bloc countries.

Read: Imagining the World from Behind the Iron Curtain

4. News from Moscow: Soviet Journalism and the Limits of Postwar Reform by Simon Huxtable

News from Moscow is a social and cultural history of Soviet journalism after World War II. Focusing on the youth newspaper Komsomol’skaia Pravda, the study draws on transcripts of behind-the-scenes editorial meetings to chart the changing professional ethos of the Soviet journalist.

5. The Human Factor: Gorbachev, Reagan, and Thatcher, and the End of the Cold War by Archie Brown

Why did the Cold War end when it did? Few questions have generated more heated debate over the course of the last three decades. Archie Brown, one of the foremost experts on the subject, shows why the popular view that Western economic and military strength left the Soviet Union with no alternative but to admit defeat is erroneous.

The Velvet Revolution in November 1989 brought about the collapse of the authoritarian communist regime in what was then Czechoslovakia, marking the beginning of the country’s journey towards democracy. Velvet Revolutions examines the values of everyday citizens who lived under so-called real socialism, as well as how their values changed after the 1989 collapse.

7. Flowers Through Concrete: Explorations in Soviet Hippieland by Juliane Fürst

Flowers through Concrete takes readers on a journey into a world few knew existed: the lives and thoughts of Soviet hippies, who in the face of disapproval and repression created a version of Western counterculture, skilfully adapting, manipulating, and shaping it to their late socialist environment. As a quasi-guide into the underground hippieland, readers are situated in the world of hippies firmly in late Soviet reality and are offered an unusual history of the last Soviet decades as well as a case study in the power of transnational youth cultures.

In 1973, Billy Graham, “America’s Pastor,” held his largest ever “crusade.” But he was not, as one might expect, in the American heartland, but in South Korea. Why there? Race for Revival seeks not only to answer that question, but to retell the story of modern American evangelicalism through its relationship with South Korea. With the outbreak of the Korean War, the first “hot” war of the Cold War era, a new generation of white fundamentalists and neo-evangelicals forged networks with South Koreans that helped turn evangelical America into an empire.

9. Afghan Crucible: The Soviet Invasion and the Making of Modern Afghanistan by Elisabeth Leake

On 24 December 1979, Soviet armed forces entered Afghanistan, beginning an occupation that would last almost a decade and creating a political crisis that shook the world. To many observers, the Soviet invasion showed the lengths to which one of the world’s superpowers would go to vie for supremacy in the global Cold War. The Soviet war, and parallel covert American aid to Afghan resistance fighters, would come to be a defining event of international politics in the final years of the Cold War, lingering far beyond the Soviet Union’s own demise. Yet Cold War competition is only a small part of the story.

For more titles on the Cold War, visit our website.

This blog post was written by the OUP History Team.