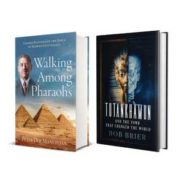 100 Years After the Discovery of Tutankhamun's Tomb

Learn more about Walking Among Pharaohs by Peter der Manuelian and Tutankhamun and the Tomb that Changed the World by Bob Brier!

The Ancient Egyptian civilization is regarded as one of the most iconic civilizations in history. It lasted for over 3,000 years, with the Nile River serving as a lifeline for small, independent city states to bloom along the river due to its agricultural predictability. As the fertile valley produced surplus crops, large populations thrived, leading to greater social development and culture.

Napoleon Bonaparte’s Egyptian campaign in 1798 inspired a burst of Egyptomania in Europe. Ever since then, many world scholars have attempted to discover the riches of the land, including American George Reisner, Egypt’s premier archaeologist of his era, and British Howard Carter, who discovered the Boy King Tutankhamun’s tomb.

Travel back in time to Ancient Egypt and explore pyramids with hidden burial chambers, colossal royal statue, miniscule gold jewelry, and much more. Explore the interactive map below.