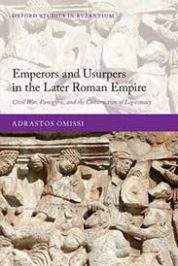 Emperors and Usurpers in the Later Roman Empire

In AD 400, the Roman Empire encircled the entire Mediterranean and looked, for all the world, as if it would continue to do so indefinitely. By AD 500, the Western portion of that Empire was no more. In its place stood some half dozen new kingdoms whose names—the kingdoms of the Franks, the Burgundians, the Vandals, the Saxons, the Goths—linked them not to the old Empire but to the world beyond its frontiers, the world of Germanic Europe. Given this, and given the images of wars and violence that colour almost every narrative of the period, ancient and modern, it has always been hard to escape the conclusion that the blame for Rome’s fall lies squarely with the ravening barbarians at the gates.

Barbarians there were, of course, but the truth of how they came to be at the gates is a little more complex. Since the second century BC, with the defeat of its greatest rival, Carthage, Rome had been the only show in town. For some six hundred years no power had existed that could rival Rome’s economic and military might. The Romans, however, faced a different military problem. Their Empire was simply too big: 1,500 miles north to south, 2,500 miles east to west, broken by mountain ranges, and spread across three of the world’s seven continents. As Augustine lamented in the early fifth century in his vast magnum opus, The City of God “the very breadth of the Empire has brought forth wars of a worse sort—social or rather civil wars” (19.7).

“Since the end of the second century AD, competition to dominate the vast apparatus of the Roman state had created conditions of almost endemic civil war.”

Since the end of the second century AD, competition to dominate the vast apparatus of the Roman state had created conditions of almost endemic civil war. Of the 29 decades between the year 190 AD and the year 480 (the year in which the last man claiming the title of Roman emperor in the West died), only two passed unmarked by Roman civil war. The third century, particularly during the so called “third century crisis” of 235-284 AD, is often seen as the high point of this trend, a period in which more than 80 emperors claimed power in short, bloody reigns, all but four of which ended with the emperor dying violently at Roman hands. Yet if in the fourth century the frequency of civil war declined, its intensity, if anything, increased. Five times between 300 and 400 AD, wars were fought that pitted the entire military manpower of the Eastern Empire against that of the West, wars settled in terrifyingly bloody pitched battles at which tens of thousands of Roman soldiers died. In 357, the emperor Julian led a small Roman army of 12,000 men against a coalition of Alemannic kings at Strasbourg, at which battle—a crushing Roman victory—Julian lost only 243 men. Six years before, when the emperors Constantius and Magnentius met in battle at Mursa, so says the historian Zonaras, 54,000 Roman soldiers died.

The entire military architecture of the Roman Empire was built around the fact that the greatest danger a Roman emperor faced was other Romans. Faced with a war on two fronts—one civil, one foreign—emperors invariably abandoned their foreign campaign (provincials in the threatened regions be damned)! and marched to fight their Roman enemy. Nor were Germanic “barbarians” merely spectators to these civil wars. Across the fourth century, Germanic tribesmen were recruited more and more actively to serve as foot soldiers in the armies that rival emperors would fling at one another. From the reign of the emperor Constantine (306-37 AD), men of Germanic extraction were, for the first time, granted access not only to service in Rome’s armies, but to command of them. By the late fourth century, senior military posts across the Empire were increasingly filled by men who—like Bauto, Richomer, Arbogast, Stilicho, Gainas, and others—had been born outside the Empire or were the children of people who had. Alaric, the “Goth” who sacked Rome in 410, spoke Latin, had lived his life within the Roman Empire, and led his soldiers in two bloody campaigns that the Eastern Empire waged upon the West, in 388 and 394. The line separating a barbarian king from a Roman general in the fourth and fifth century was frequently not a matter of culture, language, or ethnicity but merely a question of whether or not they were in imperial employ.

“The entire military architecture of the Roman Empire was built around the fact that the greatest danger a Roman emperor faced was other Romans.”

As military crisis on Rome’s borders worsened in the fifth century, prompted in part by the creation of a Hunnic Empire in middle Europe, competing Roman courts continued to worry, above all, about how to manage their Roman rivals. The Goths who sacked Rome under Alaric were not defeated in battle; they were rewarded by the emperor Honorius with lands in the south of Gaul in the beautiful and fertile valley of the Garonne river, in order to help protect the Italian court from Roman usurpers in Spain and Gaul. The Vandals, who crossed into Africa in 427 and founded there a kingdom that, at a stroke, deprived the Western Empire of its agricultural heartlands and the breadbasket of the city of Rome, were invited into the province by a disgruntled Roman commander who expected to use them to wage war upon his rivals in Italy. The Romans hated barbarians with a visceral passion, but in that hatred lay a contempt that led the Romans to treat them—as Varro once famously said of slaves—as “speaking tools.” Germanic barbarians, it is true, began to shear land and wealth from the Romans as the fifth century progressed. But they had been trained how to do it by the Romans themselves.

Feature image: “Constantine the Great” from Flickr (CC BY 2.0)