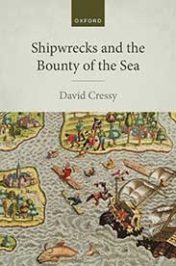 Shipwrecks and the Bounty of the Sea

News broke in 2022 that the royal frigate Gloucester that sank in 1682 had been located off the coast of Norfolk. The discovery excited marine archeologists and treasure hunters and drew attention to the scandal of the warship’s loss. It was bad enough that the ship hit a sandbank because of “the wrong calculation and ignorance of the pilot.” Worse was the behaviour of the Duke of York and other officers, who secured their own survival while hundreds of common seamen drowned. The episode is discussed in Shipwrecks and the Bounty of the Sea, along with dozens of accounts of maritime disasters and their consequences from the reign of Elizabeth I to the age of George II. Well ballasted with evidence, and fully freighted with references, the book engages social, legal, and maritime history, and the politics of the water’s edge where, as the proverb said, it was an ill wind that blew nobody any good.

No book is the last word on its subject, and every study is in some sense interim. I finished Shipwrecks in the midst of the pandemic, far from England and heavily reliant on internet resources and the generosity of archivists and librarians. Only in the spring of 2022, when the book was in press, was I able to return to The National Archives at Kew for the first time in several years. Following the principle of chasing every lead and leaving no stone unturned, I examined manuscripts that had not been previously accessible. Produced by different offices and agencies, they illustrate the richness of English public records for exposing the social, legal, and economic history of the coastline.

Included in this new trawl are Star Chamber complaints from 1582 that one landowner “spoiled” the goods and chattels that another claimed by right of “wrecke de mere” and that each brought followers “in most riotous and warlike manner” to battle it out on the beach. Honour and privilege were at stake, as well as the profits from wreckage.

Exchequer depositions from 1669 include reports by humble parishioners of their role in “hacking and hewing and carrying away” the “stuff and materials” of a ship cast away in Sussex. When their lord of the manor ordered them to desist, because he claimed wreck rights for himself, one of them threatened “that they would cleave his head over his shoulders.” Shipwrecks tested hierarchical authority and social discipline, though wreckers were not normally as violent as sometimes represented.

Admiralty examinations from 1673 concern the warship Algiers that wrecked on the coast of Essex. Local workmen related how they broke into the stricken vessel and made off with useful timber, ironwork, shrouds, and casks. Dozens of similar records describe the controversial transfer of resources from the sea to the land in the grey zone between salvage and plunder.

Treasury memoranda from 1694 register the recovery of seven bronze cannons from the naval flagship London that exploded in the Thames a generation earlier. They point to improvements in underwater technology, and to continuing disputes about ownership.

Chancery records from 1729 review wrecks on the shore of a Sussex manor over 50 years, and “the several anchors and cables that were seized by the said lords.” Seigneurial rights were in competition with claims by the Admiralty, the Crown, and local opportunists.

Customs agents, treating shipwrecked goods as dutiable imports, described in detail the fate of the Dutch freighter Hope, heavily laden from the Caribbean, that was cast away in Dorset in 1749. “As the ship struck the head and stern was carried off to sea, her bottom bulged that thrust in to the beach and there buried. The country people came down in great gangs and carried off what they could lay their hands on in defiance of the officers.” The tide surveyors gave their opinion that surviving crewmen “might have defended the ship from being plundered by the country mob, especially when three or four carriage guns in the remaining part of the ship pointed directly to the shore.” Once again discussion turns on ownership, obligation, opportunity, and control, as shorefolk and mariners competed for the bounty of the sea.

These fragments emerged too late for inclusion in my study. They add detail and texture, but do not alter any conclusions. No doubt the archives contain many more such gems. The Gloucester sank too far offshore for coastal villagers to scavenge its goods and fittings, so it will be up to suitably licensed divers to bring its bounty ashore.