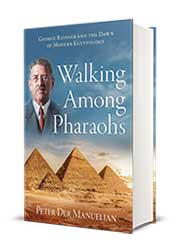 For Egyptologists the year 2022 is a special one—not one but two momentous anniversaries are on tap. Two hundred years ago, on 27 September 1822, French scholar Jean-François Champollion leapfrogged over his peers to crack the “code” of hieroglyphs—scholars could finally read ancient Egyptian inscriptions, and Egyptology was established as a new discipline. On 4 November 1922, exactly 100 years later, Englishman Howard Carter, excavating on behalf of his patron Lord Carnarvon of Highclere Castle (now best known as the setting for “Downton Abbey”) acted on a “hunch” and discovered the tomb of Tutankhamun in a previously neglected part of the Valley of the Kings, setting the world at large on fire, archaeologically speaking. “King Tut’s tomb” and the (much older) Pyramids of Giza: have any other monuments come to symbolize ancient Egyptian civilization—and archaeology—better?

Howard Carter is celebrated as a folk hero in some circles today. Egyptologists commend his meticulous documentation of more than 6,000 objects cleared from the four small chambers of Tutankhamun’s tomb, enriching the Egyptian collection in Cairo today, and, as I write this, they are moving from the Egyptian Museum in central Cairo’s Tahrir Square to just north of the Giza Pyramids where they will be exhibited in the sprawling Grand Egyptian Museum/GEM, set to open soon. One shudders to think how these objects might have fared had their discovery occurred two or even just one century prior to Carter’s 1922 field season.

But Howard Carter was no angel. By most accounts an often abrasive personality, he made his great discovery during an outburst of Egyptian nationalism against the British occupation that had stifled Egyptian independence since 1882. Archaeology does not exist in a vacuum, and both foreigners and Egyptians quickly pounced on the Tutankhamun find to suit their own political agendas. Carter and Carnarvon sold exclusive newspaper coverage to The Times of London, incensing their Egyptian hosts. The Egyptian Antiquities Service (Service des Antiquités), by colonialist tradition in the hands of a Frenchman, tried to rein in Carter while ensuring responsible treatment of the tomb’s treasures. Tensions flared, and, for a time in 1924-25, Carter was locked out of the tomb, with the sarcophagus lid hanging precariously by ropes in mid-air.

At the Giza Pyramids, west of Cairo, a very different approach to archaeology was in evidence during these years. George A. Reisner was Egypt’s premier archaeologist of his era, and he was excavating the pyramid field at Giza while living on-site at “Harvard Camp” just west of the site. Since 1899 he had directed the Hearst Expedition (funded by American philanthropist Phoebe Apperson Hearst) and then the Harvard University-Boston Museum of Fine Arts Expedition. Eventually he explored 23 different sites in Egypt, Nubia (modern Sudan), and Palestine.

While Carter received no formal education in his field, George Reisner obtained his BA, MA, and PhD degrees from Harvard University (1889, 1891, and 1893 respectively). This training was in the comparative philology of Semitic languages, but postdoctoral work in Berlin introduced him to Egyptology. Carter took an adversarial view of his Egyptian hosts; Reisner, with his fluent Arabic, demonstrated greater affinity for the local population, especially his workforce from the Upper (southern) Egyptian town of Quft. Years earlier, Carter ran afoul of some unruly French tourists at Saqqara, and the ensuing row cost him his inspector job. Reisner by contrast followed all the rules, whether issued by local Egyptian omdas (head men), the French authorities at the Service des Antiquités, or by the British governmental officials. Carter dealt in the antiquities trade on behalf of Western collectors, a practice Reisner studiously avoided. And no one would call Carter a founding father of modern scientific archaeology, while Reisner, augmenting and improving on his British predecessor Flinders Petrie’s methods, was precisely that. His focus on stratigraphy (layers of deposits), strict documentation of every phase of the excavation process, and the creation of typologies for every type of object and monument discovered, set him apart from all other archaeologists of his day. Largely due to Reisner, one could claim that during the first half of the twentieth century, Egyptian archaeology was at the forefront of world archaeology in general.

Reisner viewed Carter with his impolite behavior as the bull destined to ruin the archaeological china shop for all the other expeditions. In 1922, the partage system, providing for a 50-50 division of finds between Cairo and an expedition’s home institution, was already ending; by 1927 foreign scholars feared they would be excluded entirely from the Service des Antiquités. The machinations around the “Tooten-Carter” tomb, as Reisner called it, spelled trouble for all concerned.

Reisner claimed confidentially that he had heard the Egyptian government possessed evidence of Carnarvon and Carter engaging in illicit excavations, instigating thefts from sites, and smuggling antiquities: “The record is one of the most disgraceful things that has happened in our time. They are also accused of having instigated thefts from the Cairo Museum, an act of which I have long suspected them; and the proof of that may be forthcoming at any time.” In correspondence with his superiors back in Boston, Reisner reported that such damning evidence might be published if Carter did not accept the government’s terms for returning to work. Through it all Reisner had steered clear; despite Carter’s earlier visits to his excavations at Giza, he had not spoken to him since 1917 and “never accepted [Carter] or Carnarvon as a scientific colleague nor admitted that either of them came within the categories of persons worthy of receiving excavation permits from the Egypt Government.” Swallowing particularly sour grapes, Reisner even pooh-poohed the Tutankhamun find, lamenting the lack of any historical texts found in the tomb to provide answers for some of the larger questions of Eighteenth Dynasty Egyptian history and chronology. Carter for his part once returned the “favor” by refusing to allow Reisner’s assistant Dows Dunham to visit the tomb, doubtless due to Dunham’s affiliation with the Harvard-MFA Expedition. During Carter’s “exile” from the tomb, he embarked on a lecture tour in America, but mocked the reception he received in Boston, thanks to Reisner’s associates there making “asses of themselves.” No love was lost between the two men.

“Carter’s talented but difficult character, Reisner’s disdain (and envy?), and the political tensions surrounding archaeology, colonialism, and nationalism, made for a heady mixture in 1920s Egypt.”

Later conversations between Carter and some of his confidants revealed that he had known all along where to search for the tomb of Tutankhamun, based on earlier finds of a colleague in the Valley of the Kings back in 1914 which had not been followed up. Carter’s professed “hunch” and archaeological acumen in locating the tomb were in fact fictions.

Carter’s talented but difficult character, Reisner’s disdain (and envy?), and the political tensions surrounding archaeology, colonialism, and nationalism, made for a heady mixture in 1920s Egypt. We might wonder how differently the Tutankhamun clearance would have proceeded under Reisner rather than Carter. For starters, there would have been no acrimony with the Egyptian authorities. Secondly, Reisner would have worked much more slowly, as he proved in 1925 when he spent 321 days on one tiny royal burial chamber—with deteriorated contents—belonging to Queen Hetep-heres at Giza, amassing 1,490 photographs and 1,701 pages of notes. Tutankhamun’s tomb by contrast contained four chambers packed with complete objects.

The boy-king’s own history, at the center of a religious schism perpetrated by his father, the pharaoh Akhenaten, will forever be tied to the career of the gifted but mercurial Howard Carter. But Reisner had even trained Carter’s best assistant, Arthur Mace, and so we should not forget Carter’s archaeological contemporaries on the banks of the Nile. The greatest among these archaeologists, the golden glitz of Tutankhamun’s tomb notwithstanding, was George Reisner.

Listen to Peter Der Manuelian discuss George Reisner’s life, the rise of American Archaeology in Egypt, and nationalism and colonialism in archaeology on The Oxford Comment podcast.

Peter Der Manuelian is Barbara Bell Professor of Egyptology in both the Near Eastern Languages and Civilizations and the Anthropology Departments at Harvard University, and director of the Harvard Museum of the Ancient Near East.