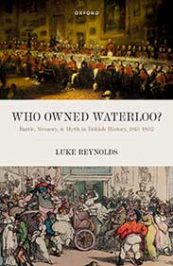 When the House of Commons began discussing a national monument to the Battle of Waterloo in January 1816, they were forced to debate an issue that still concerns politicians, activists, and scholars today—how does a country choose what to commemorate? What elevated the victory of 18 June 1815 over other great British victories in the previous quarter century of war? What about Trafalgar, Salamanca, or Vittoria? Or indeed a monument to the war as a whole, as the architect Benjamin Dean Wyatt and MP George Tierney both suggested? Put simply, why Waterloo?

Outside the Palace of Westminster, however, there was no hesitation or discussion. The people decided, imprinting on Waterloo as their victory. Other battles and their participants were commemorated in select locations, but Waterloo immediately assumed a position of primacy in British life that it would enjoy for nearly half a century. Bridges, streets, businesses, vegetables, and even shades of blue were named for the battle; theatrical and open-air re-enactments, panoramas, models, and paintings all drew huge crowds; narratives, memoirs, prints, and other commemorative merchandise flew off the shelves; and 18 June became an unofficial national holiday, marked by dinners, balls, fairs, fetes, and openings all over Britain and increasingly throughout the Commonwealth as the years went on.

Well, why Waterloo? What combination of factors elevated British commemoration of Waterloo above all the other engagements that made up the Revolutionary and Napoleonic Wars? I believe above all else neatness, timing, and the fundamental shifts occurring in British society and national image in the first half of the nineteenth century.

“What elevated the victory of 18 June 1815 over other great British victories in the previous quarter century of war?”

Let us start with neatness. As a baseline, the British won. Waterloo could have been purposely designed by a focus group as a perfect grand finale to long years of war. Three of the great military leaders of the age—Prince Blücher (whose efforts, within days, were already being downplayed by certain Britons), the Duke of Wellington, and Napoleon Bonaparte—met in a decisive battle in a relatively small valley not a very long way from the Sceptered Isle itself. Waterloo was, in almost every way, contained and concentrated. Wellington’s army had covered itself in glory in the Iberian Peninsula, but the Iron Duke had never faced Napoleon himself, lessening those victories in some eyes. At Waterloo Wellington and Napoleon finally met, and it was the man that many were already transforming into the living avatar of Britain’s military glory that emerged victorious.

Next let us turn to timing, crucial for three different reasons. First, Waterloo benefited from being the last major British battle for several decades (in the European context until Navarino in 1827 or the Crimean War in the 1850s). It had time to sink into the nation’s consciousness without being supplanted. All previous British victories in the Napoleonic Wars had been celebrated in great style, but they had always been supplanted by the “next big thing”—Ciudad Rodrigo had given way to Badajoz, Badajoz to Salamanca, and Salamanca in turn to Vittoria. There was no “next big thing” in a military context after Waterloo, so it remained the “big thing” for decades. Second, it is important to note that the last major British battle before Waterloo was not Toulouse, which, although anticlimactic, was a victory, but New Orleans, where an outnumbered American force largely made up of militia and volunteer regiments decisively defeated a British expedition that included multiple regiments that had served with distinction in Wellington’s Peninsular Army. Waterloo was seized on as a golden opportunity to wipe the bad taste of New Orleans and its roughly 2,000 casualties (to the Americans’ 71) from the national consciousness, and every effort made to elevate Waterloo diminished New Orleans. Thirdly, there is the timing of the battle within the calendar itself. While the fact that 18 June is only days away from the summer solstice served to extend the battle until late in the evening, it also meant that the anniversary of the battle was ideally timed for outdoor commemorative events which could take advantage of usually good weather and that same extended light.

“Great Britain had built its secular national identity largely on an antagonistic relationship with France — its great enemy militarily, economically, gastronomically. Then it won.”

Finally, we come to Waterloo’s place in the shifting national identity of Great Britain. For arguably a century before Waterloo, Great Britain had built its secular national identity largely on an antagonistic relationship with France—its great enemy militarily, economically, gastronomically. Then it won. While this placed Britain in an unrivaled position as one of the great powers of Europe (if not the great power of the nineteenth century), winning also left a gap. How to define Britishness if not in opposition to Frenchness, when France was no longer the threat? Waterloo helped fill that gap as Britain underwent the shift from its Georgian and Regency identity to its Victorian one, and in its commemoration, we see the seeds of Victorian culture: spectacle, tourism, domesticity, imperial expansionism, and new forms of both consumerism and propaganda.

Waterloo’s ascendancy as the celebration—immediately, and consistently into the 1850s—happened organically in a population eager for victory and eager to define what Britishness meant on its own terms. Having become a crucial part of Great Britain’s creation myth, Waterloo was distilled into the perfect moment to encapsulate British military triumph and wider British ascendency, simultaneously anchoring Britain to its past while justifying its present and shaping its future.

Parliament never did erect a monument to Waterloo.

Featured image: “The wars of Wellington, a narrative poem” by William Heath, from the British Library via Flickr, public domain.

Luke Reynolds received his PhD from the Graduate Center of the City University of New York and also holds degrees from Trinity College, Dublin, Hunter College, CUNY, and the University of Cambridge. A born-and-raised New Yorker, he is currently a Visiting Assistant Professor at the University of Connecticut's Stamford Campus.