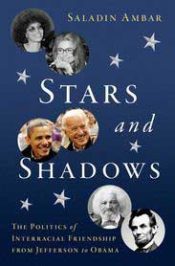 Stars and Shadows: The Politics of Interracial Friendship from Jefferson to Obama

There have been instances of interracial friendship even in the worst of times—from Benjamin Banneker and Thomas Jefferson’s ill-fated efforts to the more hopeful stories of James Baldwin and Marlon Brando and Angela Davis and Gloria Steinem.

Explore five of these noteworthy friendships, which have served as windows into the state of race relations in the United States and often as models for advancing racial equality.

Abraham Lincoln and Frederick Douglass met three times at the White House, with the first meeting in 1863. Though Douglass was amongst Lincoln’s harshest critics as Lincoln often failed to take a strong stance against slavery, the two eventually formed a political alliance and friendship. Their friendship would be inextricably tied to expanding democracy in America. In 1864, Lincoln enlisted Douglass’ help to inform those enslaved in the South that their freedom would be granted within Union lines by the Emancipation Proclamation.

“Douglass never let his affection and admiration for Lincoln get in the way of frank assessment of his legacy. He saw Lincoln’s flaws as well as his strengths, placing them beside each other so as to draw out the significance of what Lincoln had achieved.” – Read more about their friendship in chapter 2 of Stars and Shadows.

Mary McCleod Bethune and Eleanor Roosevelt met in 1927 at a conference for women club leaders. Bethune’s relationship with Roosevelt brought her to the White House and she wielded significant power and influence as the first black woman in an advisory role to the president. Under her leadership, the National Youth Administration provided training and employment to thousands of black Americans. Roosevelt took a larger role in element of racial justice than the president, who needed to maintain political considerations and Southern white support. As with any interracial friendship of the time, their relationship had its limits, however, together the two women worked on many endeavors for advancing the position of black Americans and provided a symbol for what might be possible on a national level.

“For over a decade, Bethune and the first lady engaged in a political dance that sought to advance mutual, and at times discordant, goals. On the one hand, Bethune fought to increase the numbers and influence of African Americans in government; she likewise sought to empower black institutions, while advancing their economic standing.” – Read more about their friendship in chapter 4 of Stars and Shadows.

Marlon Brando and James Baldwin, two influential figures and activists of the 20th century, met in 1944 in New York, drawn together perhaps by artistry and their own personal struggles. Both attended the Civil Rights March on Washington in 1963. Their friendship influenced their work and views on race throughout their lives and was of great significance to both men. It reflected what could be possible in post-war America.

“For Baldwin and Brando, the March on Washington was but a piece of a decades-long journey—but in a sense, 28 August 1963, was the apex of their powers of collaboration. Was it enough—for either of them? For the country? What was accomplished that day—and how much more remained to be achieved?” – Read more about their friendship in chapter 6 of Stars and Shadows.

Rabbi Abraham Joshua Heschel and Rev. Dr. Martin Luther King Jr. met at Chicago Conference on Religion and Race in 1963. They shared a strong moral sense of justice based on their spirituality. Heschel was by King’s side during the Selma March of 1965 and when he gave his Riverside speech condemning the Vietnam War in 1967. Their friendship also provided an important example of overcoming historical tensions in Black-Jewish relations.

“Their bond, one directed toward a great democratic project, elevated the nation’s attention to moral courage in the face of deep injustice. It did not end altogether debates over what constitutes the nature of right or justice—even among friends and people with shared political visions.” – Read more about their friendship in chapter 8 of Stars and Shadows.

“Though the friendship of Biden and Obama carries great symbolic weight, its authenticity remains unquestioned. Part of the reason is that the relationship developed from real missteps along with personal and idiosyncratic differences.” – Read more about their friendship in chapter 10 of Stars and Shadows.

Saladin Ambar is Professor of Political Science and Senior Scholar at the Center on the American Governor at the Eagleton Institute of Politics at Rutgers University-New Brunswick, where he teaches courses in American politics.

He is the author of numerous books, including American Cicero: Mario Cuomo and the Defense of American Liberalism (Oxford) and Malcolm X at Oxford Union (Oxford), which was nominated for a Hurston/Wright Legacy Award for best book in nonfiction, and is currently in development for a feature film by Number 9 Films in the UK.