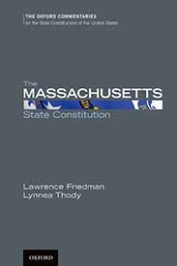 Oxford Commentaries on the State Constitutions of the United States

Volumes in this series provide a provision-by-provision commentary of the state constitutions of the United States of America and includes analysis on the state's current constitution.

The United States Constitution does not contemplate the possibility of lawmaking via direct democracy. Almost every US state constitution, on the other hand, does. This means that every state supreme court must address questions about whether initiative proposals adhere to the state constitutional requirements governing ballot questions, and about whether these proposals run afoul of some substantive limitation contained elsewhere in the state constitution. In such cases, state high courts must confront the extent to which they can—or should—police the mechanisms of popular lawmaking.

A recent decision by the Massachusetts Supreme Judicial Court (SJC) is illustrative. In Koussa v. Attorney General, the SJC put an end to an initiative proposal that would have asked voters to determine whether ride-share drivers should be classified as independent contractors or as employees. The court’s decision, as reported here, brought to a halt “what was primed to be an enormously expensive ballot campaign that was already gaining national attention.”

As is true in many states, modern initiative proposals under Article 48 of the Massachusetts Constitution are often controversial. It was not always so. Voters agreed to add Article 48 to the state constitution more than a hundred years ago “in the hopes,” as Jerold Duquette and Maurice T. Cunningham have explained, “that the power of citizens could overcome an unresponsive legislature and pass legal measures to meet the people’s needs.” As Duquette and Cunningham note, it has only been in the last two decades that the initiative process in Massachusetts has become the focus of “interest group battles and the playground of the well-heeled rather than a wellspring of citizen action.” The underlying controversy in Koussa over how to classify ride-share drivers exemplifies this development. By the end of 2021, Uber, Lyft, and other gig economy companies had devoted almost $18 million to promote the ballot question; for their part, opponents of the proposal had raised more than $1 million. The $13 million contribution from Lyft apparently was the largest in Massachusetts history.

Given the stakes, there should be little surprise that the ride-share proposal’s proponents immediately criticized the SJC’s decision in Koussa as the result of litigation designed to “subvert the democratic process.” In fact, Koussa is better understood as simply an effort by the SJC to enforce existing checks on Article 48’s initiative process—to ensure that the provision continues to reflect both the hopes of the citizens who framed and ratified Article 48, and the provision’s role in the constitutional scheme of Massachusetts government. The unanimous opinion of the court emphasizes the importance of the constitutional requirement that initiative petitions contain “only subjects … which are related or which are mutually dependent.” This requirement recognizes that voters, unlike legislators, cannot make changes to a proposal via the initiative process, as legislators can through the traditional lawmaking process.

The SJC ultimately concluded that the Massachusetts Attorney General erred in applying this requirement when she certified the ride-share proposal for inclusion on the ballot. As the court explained, when a proposal contains multiple subjects, they must share a common purpose. That common purpose cannot be so broad that the proposal’s subjects are only distantly related to one another. Rather, the purpose must be sufficiently coherent across all of the proposal’s various provisions that voters can view them together as a coherent and unified statement of policy. The court specifically concluded that the ride-share proposal violated the relatedness requirement by presenting voters with “two substantively distinct policy decisions”—one addressing the relationship between ride-share drivers and the companies they work for, and one seeking to limit those companies’ potential liability to third parties who suffer injuries as the result of conduct by ride-share drivers.

“Judicially enforceable rules regarding the ballot process … reflect an effort … to uphold the bounds of popular lawmaking via Article 48.”

It is worth keeping in mind, moreover, that judicially enforceable rules regarding the ballot process, such as the relatedness requirement, reflect an effort not just to maintain the integrity of the initiative process, but to uphold the bounds of popular lawmaking via Article 48. [RC1] In other words, these requirements seek to maintain Article 48 as a constitutional exception, not the rule. This is in keeping with the history of the initiative in Massachusetts as a mechanism for lawmaking aimed at particular instances in which the legislative process has failed to match the popular will—and not as a means to supplant the constitutional preference for deliberative lawmaking that John Adams envisioned for the Commonwealth when the citizens of Massachusetts adopted the state charter in 1780.

The history and role of direct democracy are not unique to Massachusetts, of course, and state courts may learn much from one another. The SJC, older than any other court in the nation and interpreting the oldest written constitution in the world, may yet have lessons to impart to other courts looking to police the processes of popular lawmaking embraced by their state’s constitutions.

Lawrence M. Friedman is a professor at New England Law School. He has published numerous articles on constitutional law, the Massachusetts constitution, privacy law, and other topics.