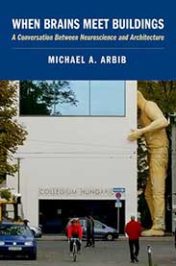 How do our brains help us learn about the spatial relationships in our world and then use them to find our way from one place to another? And how might answering this question offer new insights into how architects design?

One possible answer to the first question came from the Nobel-prize winning discovery by John O’Keefe and his colleagues that linked navigation to the hippocampus of the rat brain. O’Keefe discovered neurons whose firing encoded where, in its small world, the animal found itself. More specifically, if the animal moved around a small box or simple maze, there were neurons—he called them place cells—that fired only when the animal was in a small region that he called the place field of the place cell.

But pause a moment. The word “place” can mean somewhat different things. In response to the question “Where did you meet Luigi?”, the natural answer would be, perhaps, “On the Belvedere of the Villa Cimbrone.” But place could also require detail like “30 meters from the left end of the Belvedere and 50 centimeters back from the balustrade.” So, going forward, let’s distinguish a significant or memorable place from a metrically defined place, and reserve the word place for the first usage and location for the second.

Note that “knowing where you are” is very different from “being able to navigate.” A billboard on which there is an “x” with the legend “you are here” and is otherwise blank, is not a map. A map must encode all the places that matter to us and the paths we need to find a route from where we are to where we want to be, even if we have never before travelled between these two places. If the map is “in our head” we call it a cognitive map. The alternative to figuring out a path is simply to follow a route—whether a habitual route or one specified by a friend or smartphone.

In 1975-6, Israel Lieblich and I developed a computational account of how rats could find satisfactory paths through mazes depending on whether they were hungry, thirsty, or fearful. We modeled a cognitive map as a structure with nodes to represent significant places and with edges for the direct paths between them. We called this structure a World Graph (WG), but there are many such graphs at very different scales—whether encoding the places where food, water, or fearful stimuli can be found in a rat’s maze; the stations and connecting lines in a subway map; or the route maps of airlines that are indeed maps of the world—that differ in what constitutes a significant place when employing the map. Thus, we may have multiple WGs for the same territory.

Just as a cognitive map is different from a set of fixed paths, so the cognitive scientist’s sense of script is very different from the script of a play, where who says what and when is prescribed in advance. Consider the “birthday party” script: the guests must bring presents, someone must prepare a cake with candles, and the candles must be lit before the birthday-honoree blows them out, etcetera. But whether the presents are opened before or after the cake ceremony, and what other activities are part of the party is not prespecified. Let’s just add that, when a party is held, the activities specified in the script require places in which they occur.

The implication for architecture is that a building is designed to serve multiple purposes and the architect must envisage how the building will support inhabitants in their performance of relevant scripts. The significant places for a building (or a city) are not only those where one can perform one’s own versions of the practical scripts that the architect has considered, but also those where one can appreciate a particular view, whether from the outside or within. Moreover, a building may succeed not only by satisfying the planned scripts—consider the highly scripted activities that distinguish schools, hospitals, and churches—but also by providing opportunities for users to explore.

This positive sense of exploration is what we might call waylosing:

I am not advocating waylosing on the way to the maternity ward, but in less stressed situations it can be great fun. Waylosing is …  one of the great attractions of Venice … finding something unexpected and useful when looking for something else. (Per Mollerup, 21 April 2014.)

I thought I had coined the word waylosing before I found this citation and had indeed applied it to the absolute delight of exploring Venice in a random way, far from the madding crowd in Piazza San Marco.

From scripts to cognitive maps to architecture

All this led to a new perspective on architectural design, incorporating insights from brain imaging, neuropsychology, and computational modeling.

One challenge was to show how fragments of the architect’s memories can morph and combine in the design of forms that will afford new experiences to the future user. This required examining available studies of the role of the hippocampus in episodic memory (recalling past episodes, rather than contributing to a cognitive map) and how it also forms part of larger systems engaged in imagination. When we perform a script within a building, we are developing and exploiting cognitive maps to proceed from place to place within the satisfaction of that script, rather than simply seeking a path from start point to goal. In my book When Brains Meet Buildings, I thus analyzed what it means for the designer, imagining the experiences and behaviors of users of the forthcoming building, to in some sense “invert” the process whereby each user will form their own cognitive maps (note the plural) for the satisfaction of a range of scripts, and as the basis for forming new scripts for their own exploration and enjoyment of the building.

In sketching ideas for a building, the architect will develop ideas of the form, function, and feeling of the various spaces within and around it. The present discussion focuses on how ideas for different places envisaged to serve practical and aesthetic functions help define the places that will actually be constructed in and around the building. Ideas for these notional places must develop during the design process. These places may satisfy goals within diverse scripts—a focus on the feel of the kitchen might yield a script that demands a place for admiring the view of a garden, another for the meal-preparation script will demand a place to put the oven. At early stages of design, there will be multiple scripts, with each script having its own set of places that define the nodes of what we might call a script-WG. These specifications of the roles of inter-related places complement the architect’s sketches of the form of the building’s spaces, with limited specification of where and how the nodes will be linked to locations in the 3D Euclidean space defined around the site where the building will be constructed. Edges in a preliminary script-WG will simply mark transitions that will occur from one place to another in executing the corresponding script.

All this leads to study of melding diverse scripts as a crucial process: a design that specifies separate places for each node of each script may be both uneconomical and inconvenient. For example, the scripts for food preparation and dishwashing in a home would normally involve using the same sink, whereas in a restaurant they might not. As design proceeds towards construction drawings, the various nodes must become anchored in that Euclidean space. This can include decisions to map certain nodes in distinct script-WGs to the same location, and this entails that the two script-WGs become merged into one as shared nodes inherit their properties and the edges of their progenitors. This in turn requires assessing whether features of one script do or do not block features of the other script as the new WG is refined to accommodate both scripts. The process of working this out may reflect back to modify the “what connects to what” of design at the WG level but also the aesthetics of form that marks the architect’s individual signature in shaping the building.

The ideas in this blog post are explored at much greater length in Chapters 6 and 10 of his book When Brains Meet Buildings: A Conversation Between Neuroscience and Architecture (OUP, 2021).