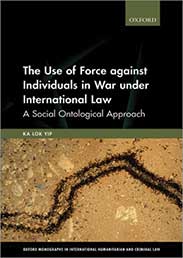 The Use of Force against Individuals in War under International Law

The heart-wrenching images of corpses with wrists tied behind their backs littered around the streets of Bucha in Ukraine, or of grins on the American soldiers jeering at naked, parading prisoners covered with feces and blood in Abu Ghraib in Iraq tell us a story: it is human individuals that author, and ultimately bear the brunt of, the evils of war. This story is echoed in an array of intellectual projects, such as the “individualization” of war or the “humanization” of laws regulating war, that seek to study war and ameliorate its effects from the angle of the individuals.

What remains under-analysed is what does it mean to be an “individual” in war or more fundamentally, what is “human”? The word “individual” is derived from “indivisible”; to speak of “human individual” presupposes a human being as a single-minded, self-determining unit, instead of an assemblage of social forces. But to understand the victims and the perpetrators of the evils in Bucha or Abu Ghraib as human individuals only in this atomistic sense mystifies more than it clarifies. De-emphasizing the contexts of the war that shape these evils render them mysterious even as they are outrageous—inexplicable evils are doubly shocking.

“What remains under-analysed is what does it mean to be an ‘individual’ in war or more fundamentally, what is ‘human’?”

Yet this was precisely the perspective of human rights networks that had designed their advocacy strategies to focus on “problems whose causes can be assigned to the deliberate (intentional) actions of identifiable individuals” with a “sufficiently short and clear” causal chain rather than “problems whose causes are irredeemably structural.” Under this strategy, “human rights violations in war” became synonymous with war crimes and individual criminal accountability came to be viewed as the primary tool to ameliorate the harmful effects of war. This development is music to the ear of certain politicians keen to exteriorize collective war guilt while legitimating military actions sanitized of individual wrongdoing. It also provides a gateway for certain ethicists to espouse stronger ethical requirements on individuals in war through the criminalization of aggression across the entire chain of command, including foot soldiers.

This individualist focus in understanding war is often contrasted with the opposite idea that “war is a practice among collectives, and particularly sovereign states.” As Rousseau noted from a holist perspective, war “is not a relation between man and man, but a relation between State and State, in which individuals are enemies only by accident.”

This dichotomy between individualism and holism, the central issue in social theories, has crucial significance on how we approach war and its legal regulation. While an individualist approach to war would focus its regulation on inducing the self-determining individuals to adopt the desired conduct in war, a holist approach would focus its regulation on transforming the structural conditions that shape the war. Most modern social theories reject the totalization of either extreme and recognise the roles of both individuals and structural conditions in constituting social actions, including in war. This social lens provides important insights on one of the unresolved dilemmas in international law of our times—the relationship between international humanitarian law (IHL) and international human rights law (IHRL), which seems to prohibit conduct allowed by IHL.

“This dichotomy between individualism and holism, the central issue in social theories, has crucial significance on how we approach war and its legal regulation.”

Through a social lens, war always represents a primary failure of the law to create the desired structural condition—peace. This failure relegates IHL as a secondary norm to induce individuals to do what they can qua individuals to contain the failure, by drawing a line between conduct for which combatants are entitled to immunity (as legitimate acts of war that would otherwise be criminalised in peacetime) and other conduct that could attract criminal liability (potentially aggravated as war crimes). IHL thus sees a world of individuals and seeks to regulate their conduct in circumstances not of their own choosing. In contrast, IHRL sets requirements on structural conditions, for which states and other entities with structural power are responsible. IHRL thus sees a world of structures and seeks their transformation. These different strata of social reality (individual conduct vs structural conditions) addressed by IHL and IHRL  risk being conflated by attempts to assimilate IHRL to IHL (e.g. through the doctrine of lex specialis) or IHL to IHRL (e.g. through criminalisation of “legitimate acts of war” under certain revisionist just war theories) or just anyone to the other (through the fluid legal technique of systemic integration).

Giving attention to the structural dimension of war in no way privileges sovereign state interests, compromises human rights, or exonerates war criminals. On the contrary, it is only by recognising the potency of structural conditioning that states’ structural power can be properly scrutinized, the demand for the structural enablement of  human rights can be legitimately made, and the line separating good and evil that passed through the hearts of the individuals who have killed and tortured in Bucha and Abu Ghraib can be truly discerned.

Dr Ka Lok Yip is Assistant Professor at Hamad bin Khalifa University. Her academic research straddles international law, social theory, and empirical studies in armed conflict and post-conflict settings. Besides academia, Dr Yip is an experienced international lawyer who has been actively involved in peace and justice initiatives in the Middle East.

Wars of national liberation: The story of one unusual rule I