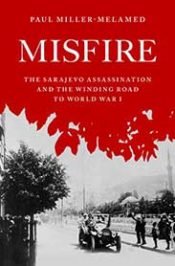 Misfire: The Sarajevo Assassination and the Winding Road to World War I

Shot through the neck, choking on his own blood with his beloved wife dying beside him, the Archduke Franz Ferdinand, heir to the throne of the Habsburg Empire, managed a few words before losing consciousness: “It’s nothing,” he repeatedly said of his fatal wound. It was 28 June 1914, in the Bosnian capital of Sarajevo. One month later, what most Europeans also took for “nothing” became “something” when the Archduke’s uncle, Emperor Franz Joseph, declared war on Serbia for allegedly harboring the criminal elements and tolerating the propaganda that prompted the assassination. The First World War began not with Gavrilo Princip’s pistols shots, but because European statesmen were unable to resolve the July [diplomatic] Crisis that ensued.

That crisis may have been short-lived, but the conflict between the venerable Habsburg Empire (Austria-Hungary) and the upstart (and far smaller) kingdom of Serbia had been brewing for decades. At its core were the South Slavs of Bosnia-Herzegovina—Muslims, Catholic Croats, and, above all, Orthodox Serbs that Serbia claimed as its rightful irredenta, its “unredeemed” peoples. Austria-Hungary had administered Bosnia since taking over from the declining Ottoman Empire in 1878. It poured enormous resources into developing the territory economically, though scant benefits were seen by peasants like Princip’s family, who resented their poverty and repression under Austrian rule as much as they had the Ottomans’ long reign. Then, in 1908, the Habsburg Empire annexed Bosnia-Herzegovina outright. For the next six months, the Bosnian [annexation] Crisis convulsed Europe. It has been called the prelude to World War I, though it by no means made that war “inevitable.” Russia, which sought control over the central Balkan region possibly through its partner state Serbia, was too weak to fight back in the wake of its defeat in the Russo-Japanese War. And while the Serbs were, literally, up in arms and made a big show of mobilizing their meager army, they stood no chance without Russian backing. Meanwhile, the annexation was accepted by the other Great Powers as a fait accompli.

It would be easy to conclude from this sparse summary of Balkan tensions that the Sarajevo assassination was driven by Serbian resentment over Austrian control of Bosnia and Herzegovina. Such an interpretation is strengthened by the fact that myriad accounts of the political murder depict Princip and his accomplices as “Serbs” or “Serb nationalists” backed by a “secret” Serbian “terrorist” organization: Unification or Death, more notoriously known as the Black Hand. It’s all very subversive and satisfying to our contemporary sensibilities. Some scholars have thus even latched onto analogies between the Black Hand “terrorist network” and today’s Islamic fundamentalists. The issue is not merely inaccuracy or exaggeration, but that it’s part of the mythology that has accumulated around the Sarajevo assassination.

It’s true that the assassins concocted their plot in Belgrade and obtained their weapons, training, and logistical support in Serbia. Yet no official Serbian organization sponsored them, and there’s no evidence that anyone but rogue rebels in the Black Hand acted to aid the Bosnians, rather than the highly nationalist military faction itself. Far closer to the truth is that Princip and his co-Bosnian conspirators needed no more motivation to organize and execute the assassination than their patent suffering under Habsburg rule, as they insisted repeatedly at their trial. Serbia, meanwhile, did not need a war with a European Great Power, particularly on the heels of its hard-fought victories in the Balkan Wars (1912/1913). The Black Hand leaders knew this, which is why there’s evidence that they actually tried to stop the conspiracy that they never initiated in the first place. Yet the demonization of official Serbia and its uncontrollable nationalist factions persists as the main explanation for the Sarajevo assassination.

This should not be surprising, and not because the breakup of Yugoslavia in the 1990s put Serbian nationalism again on display. No, the reason the alleged Serbian backing of the Sarajevo assassination is so compelling is the war itself—for how to explain the Sarajevo assassination has become an escape hatch for the true criminals in Europe’s “civilized” capitals. Thus, the myth of Sarajevo includes the endless stereotypes of the “savage” and “war-prone” Balkan peoples, “fanatic” Serb nationalists, “terminally ill” (with tuberculosis) assassins, and that ubiquitous explanation for everything—Europe’s “fate” and Princip’s “chance.” After all, who has not heard of the “wrong turn” taken by the heir’s car after he narrowly escaped a bomb attack that very morning; or wondered why the imperial procession had even continued after the near miss; or pondered how Princip’s first bullet happened to kill the one person he wished to spare: Franz Ferdinand’s wife, the Duchess of Hohenberg? There was so much happenstance on that “cloudless” Sunday of Europe’s over idealized “last summer” that it is all too easy to forget that the initial decision for war with Serbia was taken in Vienna, not Sarajevo, and it was made with full knowledge of possible Russian intervention and, thus, European war.

The Sarajevo assassination did not “shock” the world. Nor was it a “flashbulb event” that imprinted itself on the minds and memories of all contemporaries. On the contrary, countless first-hand accounts support the relative apathy and indifference that greeted the murder—a tragedy, certainly, but not one which, as British undersecretary of state Sir Arthur Nicolson wrote eerily to his ambassador in St. Petersburg, would “lead to further complications.” What “changed everything” was not a Bosnian assassin’s poorly aimed bullets, but the historical misfire by Europe’s Great Powers, which first came to light with Austria-Hungary’s ultimatum to Serbia on 23 July 1914. By then, the Sarajevo assassination was slipping from memory—this was an age, after all, in which political murder was all too common; or, as one American newspaper casually put it, there were other Austrian heirs to replace the Archduke. But Austria-Hungary had had enough of Serbian irredentism, despite the fact that its investigators found no evidence whatsoever of Belgrade’s collusion in the Sarajevo conspiracy. And Franz Ferdinand’s final words about his fatal wound—“it’s nothing”—would never seem more ironic than when the “first shots of the First World War” were fired—not in the Bosnian capital on 28 June 1914, as myth has it, but by Austrian gunboats against Belgrade a full month later.

Paul Miller-Melamed teaches history at the John Paul II Catholic University of Lublin in Poland and McDaniel College in the United States. He is the author of From Revolutionaries to Citizens: Antimilitarism in France, 1870-1914 and the co-editor of Embers of Empire: Continuity and Rupture in the Habsburg Successor States after 1914. His most recent book Misfire: The Sarajevo Assassination and the Winding Road to World War I is now available from Oxford University Press.