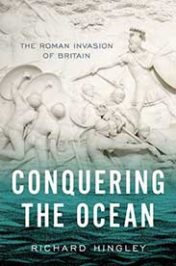 Conquering the Ocean: The Roman Invasion of Britain

2022 marks the 1900th anniversary of the beginning of the construction of Hadrian’s Wall. For almost 300 years, Hadrian’s Wall was the northern frontier of the Roman empire. It was built by the Roman army on the orders of the emperor Hadrian following his visit to Britain in AD 122 and was made a World Heritage Site in 1987.

To commemorate this anniversary, we’re sharing a selection of titles exploring the history of Hadrian’s Wall, ancient Rome’s influence on British identity, the new approaches being developed in Roman archaeology, and more to read and enjoy.

1. Conquering the Ocean: The Roman Invasion of Britain by Richard Hingley

This book provides an authoritative new narrative of the Roman conquest of Britain, from the two campaigns of Julius Caesar up until the construction of Hadrian’s Wall. It highlights the motivations of Roman commanders and British resistance fighters during a key period of Britain’s history.

2. London in the Roman World by Dominic Perring

This original study draws on the results of latest archaeological discoveries to describe London’s Roman origins. It offers a wealth of new information from one of the world’s richest and most intensively studied archaeological sites.

Read: London in the Roman World

3. Destinations in Mind: Portraying Places on the Roman Empire’s Souvenirs by Kimberly Cassibry

In Destinations in Mind, Kimberly Cassibry asks how objects depicting different sites helped Romans understand their vast empire. At a time when many cities were written about but only a few were represented in art, four distinct sets of artifacts circulated new information—including bronze bowls that commemorate forts along Hadrian’s Wall.

Britain Begins is nothing less than the story of the origins of the British and the Irish peoples, from around 10,000BC to the eve of the Norman Conquest. Using the most up to date archaeological evidence, together with new work on DNA and other scientific techniques to trace the origins and movements of these early settlers, Barry Cunliffe offers a rich narrative account of the first islanders—who they were, where they came from, and how they interacted one with another.

In Hadrian’s Wall: A Life, Richard Hingley addresses the post-Roman history of this world-famous ancient monument. This volume explores the after-life of Hadrian’s Wall and considers the ways it has been imagined, represented, and researched from the sixth century to the internet.

Boudica: Warrior Woman of Roman Britain introduces readers to the life and literary importance of Boudica through juxtaposing her different literary characterizations with those of other women and rebel leaders. This study focuses on our earliest literary evidence, the accounts of Tacitus and Cassius Dio, and investigates their narratives alongside material evidence of late Iron Age and early Roman Britain.

This book provides a twenty-first century perspective on Roman Britain, combining current approaches with the wealth of archaeological material from the province. This Handbook reflects the new approaches being developed in Roman archaeology and demonstrates why the study of Roman Britain has become one of the most dynamic areas of archaeology.

8. Celts, Romans, Britons: Classical and Celtic Influence in the Construction of British Identities edited by Francesca Kaminski-Jones and Rhys Kaminski-Jones

This interdisciplinary volume of essays examines the real and imagined role of Classical and Celtic influence in the history of British identity formation, from late antiquity to the present day. Britishness is revealed as a site of significant Celtic-Classical cross-pollination, and a context in which received ideas about Celts, Romans, and Britons can be fruitfully reconsidered, subverted, and reformulated.