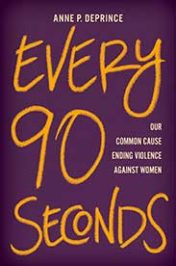 Every 90 Seconds: Our Common Cause Ending Violence Against Women

This is an extract from chapter seven, “From Hysteria to Justice,” of Every 90 Seconds: Our Common Cause Ending Violence Against Women by Anne P. DePrince.

A century and a half ago, doctors averted their collective gaze from the intimate violence in women’s lives to blame hysteria on women themselves. Meanwhile, violence against women continued to be wielded as a weapon of social control, tearing at the fabric of Indigenous and Black communities in the United States. In the 1970s, the women’s movement ushered in an age of awareness that promised change. Awareness-building led us down interconnected paths of criminalization and medicalization. Along those paths, gun laws have saved lives but focusing on criminal legal responses hasn’t deterred violence against women overall. Effective treatments for posttraumatic stress disorder (PTSD) relieved suffering even as the root causes of violence against women persist.

One step forward, two steps back. This has been our dance for decades.

Today, stopping violence against women falls to few. The criminal legal system is charged with enforcing laws. A school delivers prevention programming to the children in attendance that day. A doctor privately addresses a survivor’s pain.

And still, every 90 seconds a woman is sexually assaulted. Another is abused by an intimate partner.

We are not fated to this pattern, though. A world without intimate violence is possible, as much as that sounds like science fiction. After all, social change is science fiction, according to organizer adrienne maree brown. To end violence against women would be to imagine into existence a world that none of us has known and to persuade people that the actions they believe impossible are actually the only and best way forward.

To realize that transformation, we’re going to need a vision that is more compelling than the status quo.

Our compelling vision starts with finding an irresistible reason for change.

In recent history, we’ve had no shortage of reasons proffered to end violence against women. Protect women. Law and order. Reasons like these get bandied about when intimate violence makes the headlines. Inevitably, some politician—usually a man—stands up to tell us that they care about ending violence against women because they have a daughter, sister, mother, and/or wife.

If stopping violence against women simply required having a daughter, sister, mother, and/or wife, though, we’d have ended it already. Since we haven’t, let’s assume knowing or being related to a woman isn’t a compelling reason for social change.

Personally, I’d prefer we end violence against women and address its many impacts because it’s the right thing to do. Because girls and women, like all human beings, deserve to live lives free of violence and abuse. Because there’s no dignity in being abused, abusing others, or being the person who does nothing despite the knowledge that a woman is harmed every 90 seconds in our communities.

However, we’re not going to stop violence against women because it’s the right thing to do, because we know the facts, or because we’re altruistic. We know this from nineteenth-century France and the many #MeToo moments that have passed us by. We know this from watching interrelated movements to end racism and other forms of oppression where facts and altruism don’t change systems.

What, then, is our compelling reason to move from awareness to action?

Our reason is right there in the interconnections between the issues we each care about: violence against women is inextricably linked to the issues that stoke our greatest passions and affect our communities. Each trip to the emergency room for an injury from intimate violence adds an entirely preventable cost to overburdened healthcare systems. Gun violence in public spaces is often rooted in violence against women. Traumatic stress from witnessing and enduring violence against women disrupts learning in schools, from kindergarten to college. Women fleeing intimate violence in home countries thousands of miles away risk sexual assault during migration only to find a perilous political and legal landscape when they seek asylum in the US. Violence against women costs billions of dollars each year, contributing to widespread poverty even as economic uncertainty makes intimate partner abuse more likely. All the while, justice remains out of reach in today’s legal systems.

This complicated picture means that each of our paths to reshaping the world must pass directly through violence against women. Whether our passion is to improve healthcare access, end school-to-prison pipelines, increase the gross domestic product (GDP), build an immigration system that respects the dignity of human beings, or create pathways to justice—all of that work requires ending and responding effectively to violence against women.

Anne P. DePrince, PhD, has worked closely with victim service providers, police, prosecutors, and policy makers over more than two decades of research. A Distinguished University Professor at the University of Denver and an internationally recognized expert in violence against women, DePrince studies the impact of multiple forms of violence against women - sexual assault, domestic violence, sex trafficking, adolescent dating violence - on a range of impacts, from health and economic wellbeing to education and safety. The U.S. Department of Justice recognized her contributions to the nation's understanding of crime victims with the Vision 21 Crime Victims Research Award.