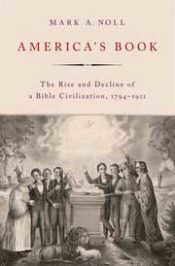 The recent American presidency illustrates why Scripture has been both a polarizing and a constructive force in the nation’s history. On 1 June 2020, Donald Trump made an overtly political point when he cleared peaceful demonstrators from Lafayette Square, who were protesting police violence against unarmed Black men, so that he could pose for a photograph clutching the Bible in front of a church near the White House.

A different motive inspired George W. Bush when on 1 February 2003, he quoted from the biblical prophet Isaiah to memorialize the astronauts killed when the space shuttle Columbia disintegrated on reentry into Earth’s atmosphere: “Lift your eyes and look to the heavens. Who created all these? He who brings the starry hosts one by one and calls them each by name.” The president went on, “The same Creator who names the stars also knows the names of the seven souls we mourn today.”

Similarly, on 26 June 2015, Barack Obama began his eulogy for Clementa Pinckney, a Charleston pastor and legislator murdered by a white supremist during a prayer meeting at his own church, by reading from the eleventh chapter of the New Testament book of Hebrews: “They were still living by faith when they died.” His eulogy, which ended with the president leading the assembled throng in singing “Amazing Grace,” drew on generations of African American sermons to remind listeners that only “the power of God’s grace” could transform tides of violence into healing for individuals and hope for the nation.

The history behind these presidential moments explains the United States’ enduring, though anything but simple, engagement with the Bible. When the colonists broke from Britain, they threw off European Christendom, especially the tight interweaving of church and state. Yet America’s overwhelmingly Protestant population not only remained loyal to the King James Bible inherited from Protestant Britain, they energized that attachment by fusing it with the principles of American democracy.

“How else could a democracy with no monarchy, state church, or powerful universities sustain the personal virtue without which republics failed?”

When in the 1790s Tom Paine, a hero of the Revolution, published an incendiary attack on Scripture, Jeffersonian populists and Federalist conservatives set aside their deep differences to mount an all-out defense. Through the next generation, energetic Baptists and Methodists relied on “the Bible alone” to spark a remarkable Christianization of the population (church adherence rose much more rapidly than the remarkably swift rise of the population). More staid churchmen, joined by a growing number of active church women, used voluntary means to create American civil society. In its efforts to make the Scriptures available to all citizens, the American Bible Society (1816) pioneered mass publishing and national distribution of print. In New York, Massachusetts, and Ohio, reformers eager to create schools serving the entire population agreed that students should read from the King James Version every day. How else could a democracy with no monarchy, state church, or powerful universities sustain the personal virtue without which republics failed?

Soon, however, Protestant hopes for a free and democratic Bible civilization faltered. When the rising number of Catholic citizens rejected Protestant impositions, like mandatory reading of the Protestant Bible in tax-supported schools, the contest began over the place of religion in public life that has never ceased. Jews, Protestants not of British background, citizens wanting no truck with religion, and eventually adherents of many world religions have kept that particular pot on boil.

Even more, early Protestant hopes for a Bible civilization collapsed because Protestant Bible believers disagreed so strenuously among themselves. Although some of their disputes reprised older European debates, fundamental differences over the Bible and slavery did the most to destroy those hopes. By brandishing Scripture to defend (or attack) the American slave system, white Protestants made the Civil War almost as much a religious war as a conflict over sovereignty and basic human rights.

Even as they did so, free Blacks and an array of enslaved African Americans were reading the Bible for themselves. While reformers like Frederick Douglass and Sojourner Truth inspired Black Americans, they were little noticed at the time. Yet their conviction that Scripture treated physical liberation and spiritual liberation as indivisible would one day contribute to the postwar Civil Rights Movement that rivetted the nation’s attention.

“The Bible that has done so much to shape American history is in turn a book thoroughly shaped by that history.”

If the Bible civilization of the early republic’s Protestants did not last long, the Bible certainly remained a national fixture. Abraham Lincoln quoted it strategically in his incomparable Second Inaugural Address. Robert Ingersoll became a celebrity by subjecting it to ridicule. Frances Willard of the Women’s Christian Temperance Union stood by it as resolutely as Elizabeth Cady Stanton’s Woman’s Bible questioned its hold. Woodrow Wilson, Theodore Roosevelt, and William Jennings Bryan mastered its vocabulary to promote their differing versions of American civil religion. And so it continues into the twenty-first century of Bush, Obama, and Trump.

Scripture obviously remains central for weekly observances in churches and synagogues, as in the private lives of countless families and individuals. But even these realms are touched by a history as rich as it is complex—where Bible believers have fed the hungry, educated the unlettered, protected the unprotected, and hammered at the chains of physical bondage. But also, where they have forged the chains of physical bondage, sanctioned partisanship, defended privilege, and exploited racial difference. The Bible that has done so much to shape American history is in turn a book thoroughly shaped by that history.

Mark Noll is the author of America’s Book: The Rise and Decline of a Bible Civilization, 1794-1911; In the Beginning Was the Word: The Bible in American Public Life, 1492-1783; and America’s God: From Jonathan Edwards to Abraham Lincoln.