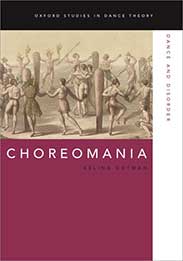 Lockdown raves, dodging people in the street, no more hugs, then hugs, then no more hugs, then hugs; confinement within the home worthy of house arrest—and the language of self-isolation, shelter, safety… all the makings of a sci-fi horror film depicting the world at an end. Or a history book, which is what this pandemic has felt like to me at times, having spent well over a decade thinking about historical epidemiology, specifically in relation to ideas about dance.

What came in the nineteenth century to be known as the “Black Death,” or bubonic plague, decimated somewhere between a third and half of the population of most towns and villages, cities and countrysides in the middle decades of the fourteenth century. It returned in bouts for centuries afterwards. At the same time, people, it seemed, were dancing; this gaiety in turn drew the attention of moralists who thought no one should be doing anything of the sort. Sometimes, these dancing people were travelling pilgrims, as I realised, digging through the archives of this medieval lore. Sometimes, they were hippie-like characters who wore wreaths in their hair and hung out in makeshift campsites outside town. By the time these stories came through to nineteenth-century colonial eyes, this started to look like what was being observed of rebellions—often dancing, sometimes no—all over the colonial world. In Madagascar, people were “possessed” by the dead queen, Ranavalona I, who was being called upon to help depose her puppet son; this too was described in medical literature as a dancing “plague” or epidemic. And yet as I realised, looking into this further, this actually constituted a perfectly legitimated form of governmental riposte. And the examples proliferate.

What today’s choreographies of gathering and distanciation show is that far from being “unprecedented,” today’s times, as it were, have a long history of precedent in ways of moving and ways moving bodies have been imagined or understood. Disorderly bodies—those that appear not to adhere to rules of good conduct—tend to be likened to the diseased, the contagious; tend to be seen as “contagious” themselves. At the same time, as we know well now after two years of pandemic life, quarantine has long been a proven measure of bringing infections down. During times of severe contagion that risk compromising the most vulnerable people’s health and lives, and in effect make everyone far more vulnerable than would be the case in more “normal” times, we shift our choreographies, shift our ways of understanding what is a convivial way of moving or what is right; shift also ways we see the present moment.

What I like to think of as the feeling of historicity describes this feeling of finding something uncanny, or comfortable, in the sense that the experiences of the present will be gotten through… that something not unlike this has been lived through before. Or, and these are not mutually exclusive, that something might radically change—a hope many have nurtured, especially in the early days of the current pandemic, in thinking that perhaps relationships to work, to family, or to climate, will finally transform. The feeling of historicity—perhaps the converse to the sense of these times being “unprecedented”—allows for a measure of proximity to other people, places, and times. “Crisis” becomes relativized.

“What today’s choreographies of gathering and distanciation show is that far from being ‘unprecedented,’ today’s times have a long history of precedent in ways of moving and ways moving bodies have been imagined or understood.”

Of course, the crisis is also very real, and felt presently, no matter how “precedented” it may be in some ways. A lot of what takes place is release from pent-up tension and strain: dance “crazes” sweeping TikTok or Instagram play—unwittingly, perhaps—on a very old trope, the expression of convivial energetic release and even “madness” of a sort, that comes with being cooped up for too long. In a great “case” of so-called “dance madness” or epidemic contagion I read about in the eighteenth-century Shetland Islands, some people were more or less climbing the walls with “cabin fever”; other “cases” in the Middle Ages involve girls and boys bored in church being told to go outside and dance forever, to their deaths. Many stories came of this sort of lore: familiar today includes Hans Christian Andersen’s moralizing version in his story of the “red shoes”—too much fixation on worldly things will drive one mad. The Emeric Pressburger and Michael Powell film remake of The Red Shoes in 1948 featured a young woman (Vicky Page, played by Moira Shearer) who was so obsessed with dancing she eventually drove herself to insanity and ultimately death. Many different moralizing perspectives can be drawn from this, including, as I see it, a relationship to over-commitment or overzealousness with work, to institutional pressure (her dancing master is a slave-driver of a sort, and she is driven by her own passion, but also spurred on by this culture of “better, more” to the point that it harms).

With crowd gatherings mimicking madness, or with the many remakes of “mad” dance scenes filmed at home or in studios during lockdown, the desire for embodying “madness” seems never to have been so strong. What these moments teach us, and what I was able to explore in my book well before the current pandemic hit, was how the figure of dancing epidemics, or contagious dance, or dance madness are nothing if not enduring, and often accompany xenophobic or sexist prejudice associated with bodies apparently in disarray. Just as true is the fact that “madness” as such is at best a very volatile affair, often composed of a highly serious wish to let loose and “go a bit crazy,” together with a sense one has genuinely a bit of a screw loose. To dance quite literally allows for stomping out some of the tension, laughing, bonding with those around one, and opening up the chest or neck, among other basic physical or physiological things. Nothing is very “mad” about that, though to talk of this as madness or as a craze translates depreciatively in hindsight—only if we take this dancing too literally as an expression of entire populations or groups being “sick.” On the contrary, it is wellness they’re seeking and expressing, and this wellness is of course, when the world has gone a bit bonkers—when it has become unrecognisable, one has lost one’s coordinates, one is confused and unmoored—comprised of a solid portion of humour, joy, and sheer reprieve.

This does not for a moment downplay the seriousness of actually contagious illness; doctors dancing for their patients in covid wards, in videos that have themselves gone viral, know this well. The two go hand in hand: when tensions rise, so does the need to assuage them. The challenge today is to do this nevertheless safely—to legalise gatherings so safety measures can be put into place, for example, as municipal authorities did in Strasbourg in the early 16th century, in an “episode” of dancing that has been grossly sensationalized, rather than to drive gatherings far underground. Across from my flat in London, enormous crowds gathered while clubs were closed. This was outdoors, in park space. Not an ideal measure given spread takes place even in open air; but the energy gathered kept some people going for a while. As I discovered writing my book, there is, as I’ve also noted here, nothing “manic” or “contagious” about this; but there is a long history of judgment, demonization in some cases, and medicalization from the sidelines—the sense that these young people should shut up and keep still (that their dancing itself was a plague). These are survival mechanisms of a sort, on a global level as well as on a local one. Survival comes in many forms, most of them, in the case of pandemic conditions, involving distance and masking, sanitation and further precautions; at the same time, if what we’re looking at is the history of underground culture and of rebellion, it is important, I think, to realise is that the need to dance, or the feeling of needing to join together with others in a release of energy which produces more energy in turn, has come at times with criminalization. For Native American Ghost Dancers in the 1890s, dancing in the face of genocidal conditions brought a sense of gathering and so collective force, even though crops and land were decimated through governmental treaty abuse. The dancing becomes a cipher for other tensions and culture wars, for other forces of judgment about who is allowed to move, why, when, and where.

Kélina Gotman is Professor of Performance and the Humanities at King’s College London. She writes widely on dance, theatre and the history and philosophy of disciplines and institutions.