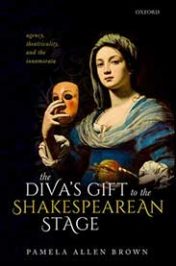 The Diva's Gift to the Shakespearean Stage: Agency, Theatricality, and the Innamorata

Why is “the all-male stage” inadequate as shorthand for the early modern stage? For one thing, it enforces a gender binary that has little to do with the subjects, desires, audiences, and practices of the time. Gender was elusive, plural, and performative, especially on the stage, where attractive androgynous boys played women, or switched back and forth between genders. The importance of female spectators, artisans, and backers gives the lie to total exclusion, and so does mounting evidence that women played in many spheres adjacent to the professional stage. Queens and aristocrats acted and danced in court masques, girls took roles in shows at great houses; mountebanks, tumblers, and rope walkers drew crowds on city streets; and women played in parish drama and danced in morrises. Similar performances by women show up on the professional stage, albeit in parts played by boys.

Not all this female talent came from England. Some came from abroad, especially Italy. In the mid-1570s versatile Italian troupes, some with star actresses, visited England and played for Elizabeth and for popular audiences. Their impact was immediate: writers began to turn out plays starring bold, exotic, and charismatic women. Each is a variant on the innamorata accesa (woman inflamed with passion), the trademark of the foreign diva. Suddenly boys were playing enticingly hot-blooded and Italianate heroines: the love-struck, cross-dressed virgins in Lyly’s Gallathea, the desperate Queen Dido in Marlowe’s The Tragedie of Dido, Queen of Carthage, and the strong-willed avenger, Bel-Imperia in Kyd’s The Spanish Tragedy. From the start of his career, Shakespeare featured vividly theatrical Italian women, including Julia of Two Gentlemen of Verona, Beatrice of Much Ado About Nothing, Portia of The Merchant of Venice, and Juliet of Romeo and Juliet.

All bear a distinct resemblance to the prodigious innamorata shaped by divas such as Isabella Andreini, Vittoria Piissimi, Angelica Martinelli, and Diana Ponti. Like Shakespeare’s boy player, they were highly skilled professionals who began performing very young. All were trained in music and memorization, and some grew famous for singing. Both actresses and boys offered androgynous appeal and protean volatility, especially useful in comedies of cross-dressing. Both women and boys inspired writers to exploit their crowd-pleasing talent, training, and beauty, leading to more plays centered on women’s choices and desires. But there the resemblance ends.

As full company members, actresses had far more autonomy than boy apprentices. They also took far greater risks, traveling constantly in often hostile territories far from home, and some became leaders of their troupes. Successful actresses enjoyed social as well as geographic mobility. Most came from the courtesan class, where they gained their educations; but in the theater, they played refined young women. Unlike boys, some became international stars, with kings and queens as protectors and patrons. A few were literary prodigies, such as Isabella Andreini, who wrote and published poetry and a pastoral, and was admitted to an all-male academy. Whether playing the innamorata in comic, pastoral, or tragic modes, the diva always spoke in literary Tuscan, spinning out witticisms, conceits, or poetic laments. She gained this facility through constant study and memorization of choice passages from romances, novelle, and poetry.

To the English the diva was a glamorous prodigy, a novelty with tremendous stage appeal. Emulating the innamorata she created, they invented a “boy diva” capable of bravura displays—sung laments, swordfights, clever cross-dressing, riveting suicides—in plays of all kinds. To stress her alienness, the English stepped up the type’s metatheatricality. She stands out by alluding often to acting and theater, and leaps at the chance to perform. The audience is rarely far from her mind, and she connects to them by speaking in asides and soliloquys. She milks her big scenes by drawing out suspense, like Portia before the court in The Merchant of Venice, and delights in her own witty acting, like Rosalind in As You Like It. Proud of her greatness she seeks glory and fame, like Cleopatra. One of the most difficult star turns is the full-tilt mad scene, a specialty of Isabella Andreini, whose celebrity inspired Shakespeare, Webster, Middleton and others to include madwomen in their plays. All such roles relied on sprezzatura and improvisatory ability, qualities that were not easily imitated. By loading a boy’s role with alien literariness and emotional volatility, and cuing him artfully, playwrights created the illusion of Italianate improvisatory genius.

Because she is foreign, passionate, and theatrical, the diva-type is also scandalous and strange. English stage characterizations range in tone from fascinated ambivalence to savage caricature and bewhoring. Despite this animus, boys won applause and admiration as they portrayed Juliet, Desdemona, Vittoria Corombona, and other stellar roles, showing the power of the diva type in performance. Given the fervent attacks on theater and on actresses in particular, it’s remarkable that two vulnerable groups—women players and boy actors—did so much to increase the complexity and importance of female roles in this period. To return to my title, this phenomenon shows why “the all-male stage” is such a misnomer. Many of the best female parts written for boys, from Viola to the Duchess of Malfi, are marked indelibly by the creative labors of women.

Pamela Allen Brown is Professor of English at the University of Connecticut.

Brown has published widely on female playing and jesting in early modern England and her books include Better a Shrew than a Sheep: Women, Drama and the Culture of Jest in Early Modern England, As You Like It: Texts and Contexts (with Jean E. Howard), and Women Players in Early Modern England: Beyond the All-Male Stage (with Peter Parolin). A founding member of Theater Without Borders, she has also translated stage dialogues by the diva Isabella Andreini in The Lovers' Debates for the Stage: A Bilingual Edition (with Eric Nicholson and Julie Campbell).

Brown is the author of The Diva's Gift to the Shakespearean Stage: Agency, Theatricality, and the Innamorata (Oxford 2021). Visit her website.