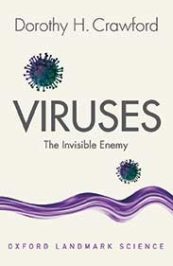 What are viruses for? What use are they? These are questions that my frustrated grandson asked during the first lockdown in 2020, when he was deprived of friends, school, and sports, all because of a virus.

Of course, these questions can be discussed at several levels from the philosophical to the practical to the scientific, but the bottom line is that although viruses are well known for causing potentially lethal infectious diseases in animals and plants, they are not all bad. Here I discuss the nitty gritty of the world of viruses—the virosphere—including what viruses are, how they survive, how they impact on life on earth and how we are beginning to harness them for our own good.

First, I must clarify what viruses are: plants? Animals? Fungi? Bacteria? Archaea? The answer is none of the above. Because viruses are not built of cells like all other life forms, they don’t fit into any domains of life. So the question becomes: are viruses actually alive or are they inanimate entities? And on this issue scientists disagree. Viruses are particles that possess some attributes of life, such as an inherited genetic code, but they lack others, like the ability to metabolise. So, viruses are obligate parasites; the particles that carry their genetic code as either DNA or RNA (meaning ribonucleic acid, similar to DNA but a long, single-stranded chain of cells that processes protein and carries genetic information) are inert until they infect a living cell. Then they highjack the cell’s organelles to download viral genes and translate them into virus proteins from which new viruses can be assembled. Then finally thousands of offspring are released from the cell to infect other cells in a never-ending trail of destruction.

How do viruses cause disease?

Viruses cause disease by damaging or killing the cells they infect, and so the profile of a disease induced by a virus is determined by the type of cells a particular virus infects, be it the pneumonia induced by the SARS coronaviruses, the skin rash of measles, or the terminal immunodeficiency of HIV. Only a tiny minority of viruses, estimated at 220, cause disease in humans, yet the dimensions of the virosphere are astonishingly vast. Viruses are the smallest, most abundant, most diverse, and most widespread infectious agents on the planet and kill more living things than any other creature. There are around 200,000 different virus species, with more individual viruses on Earth than there are stars in the universe, estimated at something like 200 billion trillion (^2×1023).

Why are viruses important?

Viruses infect all living things, most of which are microbes. For example, every litre of sea water contains around 10 billion bacteria and approximately 100 billion viruses, mostly bacteriophages (phage for short). As their name suggests, these infect and kill co-resident bacteria, and in doing so they perform an essential role in controlling bacterial populations, thereby stabilising marine ecosystems. Phytoplankton, the oceans’ floating population of tiny marine organisms including bacteria and archaea, are vital for marine life. They form the base of a vast food-web that begins with zooplankton, which sustain young marine animals, which feed fish, which in turn fall prey to large marine carnivores. Phytoplankton generate energy by photosynthesis, and in doing so are essential for atmospheric stability. By converting atmospheric carbon dioxide (CO2) into oxygen (O2) and water, this vast population generates around half of the world’s oxygen while also removing CO2 from the atmosphere. Marine phage control and stabilise the dynamics of this reaction by infecting and killing phytoplankton microbes that would otherwise grow uncontrollably.

Also, phage, with a generation time measured in hours, can react rapidly to any population imbalance. For instance, when nutrient levels in estuarine waters suddenly increase, often due to fertiliser runoff from agricultural land, this can cause the rapid proliferation of certain phytoplankton microbes which then cover the surface of the ocean in an algal bloom. By blocking out sunlight and producing algal toxins, this has the potential to destabilise phytoplankton ecosystems, seriously depleting O2 levels. But the rapid response of co-resident phage, with thousands of offspring released from each infectious cycle, can restore order in a matter of days.

Marine phage are also adept at initiating gene swapping. By mistakenly picking up a gene from one host and carrying it to another, the transferred gene can occasionally cause a beneficial behavioural change in its new host. Such changes may involve an increased tolerance to alterations in water temperature or chemical composition, which will allow the host to rapidly outcompete its neighbours and become the dominant population.

This neat trick for transferring foreign genes is now being utilised by scientists, both in the laboratory and more recently in the clinic. Certain designer vaccines consist of a harmless carrier virus genetically engineered to carry pieces of DNA or RNA that, when administered to a new host, will express the chosen vaccine sequence and induce the desired immune response. Several new COVID-19 vaccines presently in clinical trials have been engineered in this way, as has the Ebola vaccine that played a key role in ending a recent large outbreak in the Democratic Republic of Congo.

I hope that I have said enough to convince you (and my frustrated grandson) that viruses are essential for life on earth, but nevertheless, the present COVID-19 pandemic certainly underlines how fast-spreading, unpredictable, and lethal viruses can be. COVID-19 caught the world unprepared, with collective failures in pandemic preparedness, prevention, and response, thereby precipitating a global health and economic disaster. Clearly our present focus must be on preventing another such event occurring in the future. But how to approach this massive task? Can we avoid virus spill-over from animals by implementing human behavioural changes? Could we spot potential pandemic microbes in animals and take evasive action? Or should we settle for setting up early warning systems that would prevent a potential pandemic microbe from spreading among us?

If the next pandemic microbe is a bacterium rather than a virus then it may be possible to copy the natural marine cycles that control phytoplankton populations by using phage treatment to kill the infecting bacteria before they can cause terminal illness. This type of treatment has been used experimentally in people infected with multidrug resistant bacteria and may still come to our aid if such organisms become more widespread.

Featured image by NOAA on Unsplash

Dorothy H. Crawford is Emeritus Professor of Medical Microbiology at the University of Edinburgh, and was Head of Biomedical Sciences Division and Assistant University Principal for Public Understanding of Medicine until retirement in 2012. She is a Fellow of the Royal Society of Edinburgh since 2005 and was awarded an OBE for services to medicine and higher education in 2005. She is the author of Viruses: The Invisible Enemy (OUP, 2021).