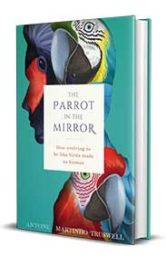 The Parrot in the Mirror

“How do I stop a cockatoo from attacking my property?” This is the title of a real, honest-to-goodness Australian government webpage and advice document on the New South Wales Department of Planning and Environment website. The webpage notes that flocks of cockatoos—sulphur-crested cockatoos especially—are known to “aggressively attack wood… decks, outdoor furniture, window sills, and houses” and that they particularly like the soft woods used in construction. The advice given ranges from making a scarecrow (or scarecockatoo, I suppose), to painting wood white, to spraying the birds with the hose (!), and it is recommended to persist in one’s chosen strategies until the birds leave, noting that this can take more than a week.

Most curiously, the page carefully elides the important question of why cockatoos attack—it says simply “there are many theories why they do this.” Ask an Australian, though, and the answer will be quickly forthcoming: the cockatoos are acting out of spite.

Most often, the supposed slight that caused the spite is the taking away of bird feeders. It may well be a case of confirmation bias, or simply of populations of hungry birds correlating within site of former bird feeders, but the story is usually told the same. “I normally put out bird seed in my garden, and all sorts of birds come and eat it, including the big cockatoos. One day, I forgot to put out the seed, and the cockatoos were clearly angry, and took it out on my house—they chewed right through my deck railing, and tore the weather stripping of my back windows!”

This superimposes a very human impulse onto the observed behaviour of the cockatoos: it looks and feels like revenge.

The idea that cockatoos are capable of human-like spite is a common one in Australia, driven both by the house-destructive behaviours and by videos and news stories of sulphur-crested cockatoos tearing off and destroying (seemingly with glee) the anti-bird spikes affixed to buildings to keep them away. I once saw a video of an activist who campaigns for better care for pet parrots destroying a small birdcage in front of the cockatoo who had been inappropriately kept in it, as the cockatoo squawked and head-bobbed and fanned his crest in what could only be described as celebration of the act of destruction. As human observers, watching the behaviours of these big, bold, intelligent birds, who are unafraid of showing us their emotions, it is very hard not to project human emotion onto the cockatoos.

” Spite is a very controversial matter when it comes to evolutionary biology and animal behaviour—and not everything that strikes us as spite at first look should really be given that name.”

But we have to be careful! Spite is a very controversial matter when it comes to evolutionary biology and animal behaviour—and not everything that strikes us as spite at first look should really be given that name. Take for example the anti-bird spikes. For a cockatoo that lives in a city, building ledges, street signs, and lamp posts are part of the bird’s (not-quite natural, but adopted) habitat. The bird has no concept of the purpose of the anti-bird spikes, because it has no concept of what is being prevented: property damage, cleaning costs, and public sanitation are not front-of-mind concerns for large parrots. The cockatoo does not see the spikes as an uncomfortable deterrent deliberately installed to keep it away, but merely as an environmental annoyance to be removed—like an ill-placed twig in a tree where it is trying to roost. So, like the twig, it destructively removes the spikes to make its environment more comfortable. The observing humans only see this as spiteful because we know what the bird does not—that the spikes were precisely designed and installed to make life less comfortable for the cockatoo.

Even supposing the cockatoo knew why the spikes were there, it still would not be spite because it has a material benefit to the cockatoo. It makes adaptive sense for the cockatoo to remove the spikes because it creates more space so that the cockatoo can comfortably and safely roost. A bit like having a car towed that has been improperly parked in your driveway, there may be a gruesome little bit of satisfaction, but it also has straightforward material benefit—you can park your own car in its proper place.

Animal behaviours that deal damage to other animals in exchange for benefit to the actor make evolutionary sense. Nature may be red in tooth and claw, but from the point of view of natural selection, dealing damage to obtain benefit is an easy calculation. From crippling parasites to territorial jostling to sexual competition, gaining a benefit at the expense of another animal is, unfortunately, how the natural world, and evolution, must often work.

What twists up the minds of evolutionary biologists though is the question of true spite: dealing damage to someone else at no benefit to yourself—just to hurt them. The human impulse to revenge has driven a lot of bad decisions in our history but it doesn’t make much evolutionary sense. Any action an animal takes, particularly violent and destructive actions, have a cost. That cost can be the chance of injury, the risk of retaliation, or just the physical energy expended; whatever it is, a well-adapted behaviour should not involve wasting energy and cost where there is no possible benefit to the actor. The cockatoos tearing up weather stripping are more like true spite. If the popular interpretation is true, and the cockatoos are retaliating after the house’s owner has stopped feeding them, the house destruction is costly spite on behalf of the birds. Cockatoos cannot eat wood or weather stripping, and in taking the time to rip up the house, they are wasting time that could be spent foraging elsewhere and risking potentially harmful retaliation (remember that hose?). The effort undertaken to destroy the house is pure spite—harming another with no chance of benefit to the cockatoos.

” Whilst we have to be careful about projecting our own emotions onto the behaviours of animals, that intelligence and social lifestyle is something we share with birds.”

Even here, though, we have to be careful. Part of a cockatoo’s natural behaviour includes chomping through wood in search of grubs and other food sources. It is conceivable that, in finding the usual bird-seed tray empty, the birds have sought to conserve energy by seeking other food sources in the immediate vicinity before moving on—including by searching the deck’s balustrade for tasty wood-boring grubs. As with every animal behaviour, we have to carefully interrogate the total environmental context of any behaviour before we draw conclusions about what might be going through the animal’s mind.

Spite, or revenge, is a very human idea. Our high level of intelligence and our highly social nature have resulted in our own species being all too capable of visiting non-adaptive, costly, damaging spite on our fellow humans—often harming ourselves in the pursuit of vengeance upon others. It is one of the uglier consequences of our remarkable brains. Whilst we have to be careful about projecting our own emotions onto the behaviours of animals, that intelligence and social lifestyle is something we share with birds, and especially with big, smart birds like cockatoos. Spite remains a controversial question in evolutionary biology—but it’s not surprising that one place we see truly spiteful behaviours that might just be real is in a bird that has so much in common with ourselves.

Antone Martinho-Truswell is a behavioural ecologist whose work focuses on animal minds and learning, especially in birds and cephalopods, intelligent species whose evolutionary history differs dramatically from that of mammals. He has been published in Science, Proceedings of the Royal Society B, Current Biology, and elsewhere, and has been covered in The New York Times, The Atlantic, The Times, and The New Scientist, as well as on BBC Radio and TalkRadio. He has also written on longstanding questions in biology, animal behaviour, and human society for Aeon and the BBC. Martinho-Truswell is currently Dean of Graduate House at St Paul's College, Sydney, and was previously Fellow in Biology at Magdalen College, Oxford.