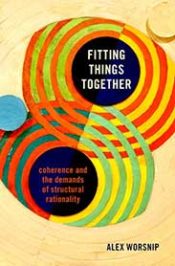 Fitting Things Together: Coherence and the Demands of Structural Rationality

Consider two different characters: Alanna and Brent. Both Alanna and Brent refuse to get the COVID-19 vaccine, but their motivations are different. Alanna believes that the vaccine is extremely unsafe and ineffective. Brent, on the other hand, believes that the vaccine is safe and effective. However, he is young and healthy, and he isn’t that worried about the effects that contracting COVID-19 would have on him. Some people have pointed out to Brent that even so, his getting vaccinated would help to protect others that he comes into contact with, some of whom are immunocompromised and so more vulnerable to the virus. However, Brent simply doesn’t care much about protecting others, and so he can’t be bothered to get vaccinated.

Are these characters irrational? Many philosophers and social scientists, and perhaps many ordinary people too, would give different answers for Alanna and Brent. Alanna, they would say, is irrational. Let’s suppose, for the sake of argument, that Alanna has plenty of evidence that the vaccine is safe and effective: she’s seen the data that shows that the vaccinated are far less likely to die from COVID-19 than the unvaccinated, and that serious side effects of vaccination are extremely rare. If she continues to believe that the vaccine is extremely unsafe and ineffective, then, she has a belief that flies in the face of her evidence, and this seems like a paradigm case of irrationality. Brent, on the other hand, may be cruel and uncaring, but this—many would say—isn’t a matter of irrationality.

Drawing on some arguments in my book, Fitting Things Together: Coherence and the Demands of Structural Rationality, I will suggest that this differential verdict—that Alanna is irrational but Brent is not—is not ultimately defensible. In the book, I distinguish two different kinds of rationality: substantive rationality, and structural rationality. Substantive rationality is about being reasonable, or responding correctly to your reasons. When we say that it’s irrational to believe in fairies, for example, we’re usually using “irrational” in its substantive sense. You have no good evidence for the existence of fairies, and so you have no good reason to believe in them; such a belief is unreasonable. By contrast, structural rationality is about being coherent—or having beliefs, intentions, and other attitudes that do not clash with each other in bizarre ways. Suppose someone believes that all Trump supporters are morally bad people, yet knows that their plumber is a Trump supporter, and admits, when pressed, that their plumber is not a morally bad person. Such a person is structurally irrational: they have a set of beliefs that are jointly incoherent, or don’t fit together right.

With this distinction in view, let’s return to Alanna and Brent. Alanna is substantively irrational, since she does not have good reasons for her belief that the vaccine is extremely unsafe and ineffective. However, she might nevertheless be structurally rational: that is, her beliefs and other mental states might be totally coherent. For example, she might also hold some complex conspiracy theory that claims that all the data regarding the vaccine’s safety and efficacy has been faked. Again, we can suppose that she has no good reasons for holding this conspiracy theory. Yet, if she holds it, her beliefs may be completely internally consistent and coherent. In summary, she is substantively, but not structurally, irrational.

What about Brent? Brent prefers avoiding the inconvenience of getting the vaccine to protecting the immunocompromised people that he comes into contact with. Like Alanna, there certainly needn’t be anything incoherent, or structurally irrational, about Brent. He may quite generally always put his own convenience over others’ wellbeing and hold a worldview according to which there’s nothing wrong with doing this. However, in order to determine whether Brent is substantively rational, we need to ask whether his preference for his own convenience over the wellbeing of the immunocompromised is actually reasonable or supported by good reasons. And I suggest that it is not: his own convenience is simply not as important as the wellbeing of the immunocompromised, and it is not reasonable to prefer the former over the latter. If this is so, Brent is substantively irrational. And so, Alanna and Brent are on a par: they are both structurally rational, but substantively irrational.

You might suggest that the answer is that there are no objective facts about which preferences are reasonable and which are not. After all, Brent would say that his preference is reasonable, and it seems hard to conclusively prove, from premises that Brent would accept, that he’s wrong about this. If this is right, perhaps it explains why Brent’s preference can’t be irrational, even substantively speaking. But if you think that, why not say the same about beliefs? After all, the claim that Alanna’s evidence really supports believing that the COVID-19 vaccine is safe and effective—rather than her wild conspiracy theory according to which all the data was faked and the vaccine is highly unsafe and ineffective—is also one that she contests, and it is surprisingly hard to conclusively prove, from premises that Alanna would accept, that her take on the evidence is an unreasonable one. So, if this line of response saves Brent from irrationality, it threatens to save Alanna from irrationality too. Whatever we say, then, it seems that there is no relevant difference between Alanna and Brent when it comes to rationality.

Alex Worsnip is Associate Professor of Philosophy at the University of North Carolina at Chapel Hill. He works primarily in epistemology, ethics, and the theory of rationality. He is the author of over twenty articles in leading philosophy journals such as the Journal of Philosophy, Mind, Ethics, and Noûs.