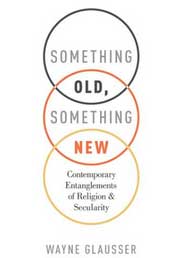 Something Old, Something New: Contemporary Entanglements of Religion and Secularity

Having chosen “entanglement” as the best word to describe religious and secular cultures interacting, I noted with interest the oral arguments in Carson v. Makin, heard 8 December, 2021. This Supreme Court case involves public support for Maine schools and issues surrounding the First Amendment Establishment Clause. Justice Kagan uses “entanglement” first in a comment to counsel for the petitioners; later, addressing counsel for the state, Justice Gorsuch offers up “entanglement” as bait for argument. Is my favorite word taking on constitutional meaning, the sort that effects real change in society?

It turns out that the word’s constitutional use dates back half a century to Lemon v Kurtzman (1971), when Chief Justice Warren Burger injected “entanglement” into the Supreme Court’s critical vocabulary. The Court faced the question, “Do statutes that provide state funding for non-public, non-secular schools violate the Establishment Clause of the First Amendment?” Eight justices answered “Yes,” and Burger set out the following test for any proper statute: “The statute must not foster an excessive government entanglement with religion.”

Although subsequent Supreme Courts have interpreted the Establishment Clause less strictly, they have not overturned Lemon in principle. Hence it made sense for Kagan to invoke Burger’s terminology as she argued with Michael Bindas, counsel for parents who have contested funding decisions. “It would lead to too great entanglement,” she said of state support for religious schools. At this point in the argument, the entanglement in question referred only to entanglement of government with religion.

When the word returns in the second half of the session, however, it refers to a different entanglement of religion and secularity—something that will pose thornier questions. This new entanglement emerges with the Court’s comparison of religious and secular curricula. Gorsuch reintroduces the term as he questions counsel for Maine, Christopher Taub. “So a private entity can provide a public education in Maine?” “Yes.” “It just can’t have too much religious entanglement? . . . I believe that was your answer to the Chief Justice.” Taub swerves away from Gorsuch’s formula, and for good reason. Chief Justice Roberts had just finished leading Taub down a rabbit hole of hypothetical curricula. The resulting entanglement of religious and secular schools produced nothing like a satisfactory legal distinction.

Roberts had posited two schools. School A is nominally religious but has a secular curriculum. School B has a curriculum that is infused with religious belief through and through. School A would likely receive funding, they agree, and School B would not. Then Roberts alters School B to something half-secular, half-religious: “Some subjects are more susceptible to religious infusion than others. So half of the classes are religious. When they teach literature, it’s from a religious perspective. When they teach calculus or chemistry, it’s not. Do they get the full amount?” After Taub hedges but suggests they would not, Roberts sharpens the hypothetical School B to a curriculum with a single suspect class: “Let’s just say they take a religious perspective on history, just that. They have a particular view of the Crusades that not everybody might share.” Now Taub backs away from the challenge. “Your Honor, as I sit here today, I cannot answer that—that would be a much tougher situation.”

What’s so tough about Roberts’ hypothetical? It’s not the overt numbers game he seems to be playing, a tolerable fraction of non-secular curricular elements; Taub must know that’s a dead end. The tough thing is that Roberts has managed to tempt counsel into doubting his own foundational argument. All morning, Taub has relied on one (apparently) simple test: a school can receive funding only if it manifests religious neutrality. Secular schools are assumed to be religiously neutral. Enter School B. School B has only this one history class left that separates it from secular schools. No doubt Taub and every member of the Court who attended a secular school remembers a history class in which the Crusades were taught from an implicitly Christian perspective. What, then, was “religiously neutral” about this secular school’s history class? As secular and religious schools thereby entangle, Taub’s primary test at the very least needs fine tuning.

Justice Alito later offers his own challenge to the religious neutrality of secular schools—he asks about a school that might “inculcate a purely materialistic view of life”—but it is Roberts’ history class that makes the subtler, better point. Here’s the underlying complication: teaching history as a secular subject involves interpreting events through filters of values and assumptions that cannot neatly be separated from those associated with religious communities. The same goes for other core humanities subjects, English and philosophy, with their interpretive projects. Counsel Bindas seems to have picked up on this complication for his closing rebuttal. “In a philosophy class, apparently, you can teach Aquinas and Augustine,” he begins. “But if you say Augustine and Aquinas were right, then apparently, you’re out. . . . That is discrimination.”

No: that is poor teaching. A good teacher would never just say any philosopher worth reading was right or wrong. A Supreme Court operates differently, of course, and it seems likely at least five of these justices will say Mr Bindas is right.

Wayne Glausser is Professor of English at DePauw University. He is the author of Something Old, Something New: Contemporary Entanglements of Religion and Secularity, Locke and Blake: A Conversation across the Eighteenth Century, the Cultural Encyclopedia of LSD, and a number of essays on literary and interdisciplinary topics, including the recent "Limbo, Pluto, Soprano: Negative Capability in Three Underworlds."