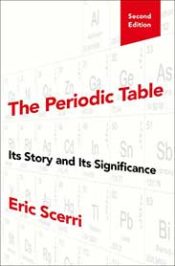 Darwin’s tree of life and Mendeleev’s periodic table of the elements share a number of interesting parallels, the most meaningful of which lie in the central role that each plays in its respective domain.

Darwin’s tree of life, incidentally the only diagram of which appears in his book The Origin of Species, is a sketch of the central idea that all animal species have a common descent, much like members of an extended family can be displayed on a genealogical tree. Mendeleev’s periodic table is likewise the central icon for chemistry and serves to summarize and classify all the elements, the ways in which they show similarities among themselves, and how they react and bond with other elements.

Even more importantly, perhaps, is the fact that almost all subsequent developments in biology and chemistry can be seen as attempts to flesh out the ideas of Darwin and Mendeleev, respectively, and to provide an explanatory mechanism for their discoveries in each case. The parallel developments of the fields of evolutionary biology and modern chemistry illustrate the way that scientific discoveries begin as observations and systematizations and eventually lead to detailed explanatory theories that feature newly discovered scientific entities—such as the DNA molecule in 1953, in the case of biological evolution, and the electron in 1897, explaining the grouping of the chemical elements. The overall nature of the process appears to be largely the same, irrespective of the details of the particular branch of science in question.

The tree of life

Evolution was in the air long before Darwin. His grandfather, Erasmus, mused about evolution in his book Zoonomia 1794 and 1796, while Lamarck presented a formal theory of evolution in 1801. The anonymously authored and widely read “Vestiges of the Natural History of Creation”, first published in 1844, speculated on the transmutation of species. None of these precedents truly anticipated Darwin, but all showed that evolution was on peoples’ minds.

Alfred Russell Wallace was the only substantive rival to Darwin’s priority and who clearly defined natural selection as the mechanism that causes evolution in his 1858 essay. Like Darwin, he invokes Malthus’ essay on population growth, Spencer on the “struggle for existence” as the ultimate brake on population growth, and the selective survival of individuals better suited to the struggle as the ultimate cause of evolution. He invokes the “tree of life” as a conceptual model for how life diversifies over time and abstracts Darwin’s argument that the fossil record and the distribution of living organisms preserve the history of how life changed over time and space. However, it seems Wallace’s essay was too brief to make a strong impression.

More to the point, the impact of the publication of On the Origin of Species in 1859 was like a tidal wave that swept away all that came before it. Darwin’s book was more than 20 times longer than the combined length of Wallace’s earlier essays. With that length came an argument that was far more wide-ranging, comprehensive, and convincing. Wallace’s essays were suggestive, but Darwin’s book was a complete argument for evolution as the unifying concept for all of the life sciences.

The periodic table of elements

Mendeleev’s great discovery of the periodic table was presented to the world in 1869 at a meeting of the recently formed Russian Chemical Society. Like Darwin, Mendeleev also wrote a very influential book, The Principles of Chemistry, which helped to propagate his ideas further afield. As in the case of most scientific discoveries, many other scientists—such as De Chancourtois, Newlands, and Lothar Meyer—had arrived at earlier precursors to the periodic table of the elements but none of them achieved the kind of lasting success that Mendeleev did.

This fact is generally believed to be due to a number of successful predictions that Mendeleev made about the existence of new elements that were eventually discovered and that had almost exactly the properties that Mendeleev had foreseen. Even in his first published table of 1869, Mendeleev clearly predicted the existence of three new elements, which he stated would have atomic weights of 44, 68, and 72, respectively. Within a period of 15 years all three of these elements—subsequently named gallium, germanium, and scandium—were indeed discovered and found to have atomic weights of 44, 69.2, and 72.3. Mendeleev’s theory provided genuine predictions in the temporal sense and numerous retrodictions or rationalizations of already known chemical facts.

Challenges to the theories

It is also interesting to examine how the tree of life and the table of the elements faced a number of challenges during their 150 year-plus development.

The tree of life

Mendel’s laws of inheritance appeared in 1865, between the publication of the first and last editions of the Origin, but Darwin never learned of his work. These laws would ultimately redeem Darwin but when they were re-discovered in 1900, they were used against him. It was not until the 1930s that Mendelian inheritance, in which copies of genes can skip a generation and reappear unchanged, was reconciled with natural selection and Darwin’s concept of inheritance.

Given these objections, why was Darwin ultimately successful? The success of any theory is determined by how well it accommodates and integrates available knowledge and its ability to make predictions. Darwin’s near-term success was dominated by accommodation, or his unification of the life sciences under a single explanatory framework.

The periodic table of elements

Just like Darwin’s theory of common descent, Mendeleev’s table faced a number of challenges but none of them seem to have been as serious as those faced by Darwin.

One of the first hurdles that Mendeleev’s system had to overcome was the fact that ordering the elements according to their increasing atomic weight, as he did, resulted in two pair reversals. For example, the element iodine has a lower atomic weight than that of tellurium, which would lead one to think that iodine should be placed before tellurium along one of the rows of the table. But doing so would be chemically inconsistent; the elements must be “reversed” if the table is to make chemical sense. The discoverers of the periodic table, Mendeleev included, made the required reversal because they were primarily interested in chemical similarities rather than upholding the notion of strictly increasing atomic weights. Mendeleev was even bolder in that he believed that the then-known atomic weights of one or both of these elements were mistaken. In the case of this prediction, Mendeleev was later shown to be incorrect by the English physicist Henry Moseley who discovered that the elements are ordered more effectively on the basis of their nuclear charges (or atomic number) rather than their weights.

A second challenge erupted in the year 1894 when a new and highly unreactive gas named argon was isolated by William Ramsay and colleagues at University College in London. Placing this new element into the periodic table was made especially difficult because its atomic weight was 40 and another element, namely calcium, already existed with precisely the same atomic weight. Mendeleev tried to meet the challenge by claiming that the new gas consisted of a triatomic nitrogen molecule. Here, too, Mendeleev was shown to be mistaken. After five years of much controversy regarding the status of argon, Ramsey himself realized that a new column could be added to the right-hand edge of the periodic table to house neon, as well as a number of other noble gases that were discovered in his laboratory in rapid succession.

The periodic table escaped being refuted and indeed was strengthened by the realization that it was capable of accommodating these new elements successfully. Mendeleev, never one to shy away from proclaiming his achievements, was among the first to embrace Ramsay’s newly created group of elements.

There are clearly similarities but also substantial differences between the case of Darwin’s tree and Mendeleev’s table. One is surely that Darwin’s theory concerns diachronic changes, meaning those that occur across time while the periodic table is of the synchronic type, in that the elements do not evolve over the time period over which they are being compared in modern chemistry. Even more obviously, perhaps, biological systems are orders of magnitude more complex than atoms are and subsequently their behavior is, not surprisingly, less predictable. In the same way, theories concerning biological systems are expected to be more controversial and more subject to internal challenges than is the case of chemical systems.

Rather interestingly, the elements themselves are believed to all have evolved from the first or primordial element of hydrogen which has just one proton, somewhat analogously to a single-celled organism in the biological realm. However, the evolution of the elements of this kind has taken place over many millions of years and requires gargantuan energies that in most cases can only occur at the center of massive stars or in the course of a supernova explosion.

Finally, whereas we have classified Darwin’s discovery as a theory, this is not the case for the periodic table. Instead the periodic table is more akin to an uninterpreted classification scheme for the elements that is in need of a theoretical explanation, and one that was duly provided by the development of quantum mechanics in the 20th century.

Darwin’s tree and Mendeleev’s table represent momentous discoveries which continue to drive the development of modern biology and chemistry respectively. Surprisingly, perhaps, the more fundamental science of physics seems to lack any such iconic and all-encompassing unifying motif.

Eric Scerri is a leading philosopher of science specializing in the history and philosophy of chemistry and especially the periodic table. He is also the Founder and Editor-in-Chief of the international journal Foundations of Chemistry and has been a full-time lecturer at UCLA for the past twenty years where he regularly teaches classes of 350 chemistry students as well as classes in the history and the philosophy of science. Altogether, Scerri has authored or edited a total of 11 books and over 150 journal articles.

David Reznick is a Distinguished Professor at the Department of Evolution, Ecology and Organimal Biology at the University of California, Riverside. His field of study is the process of evolution by natural selection from an experimental perspective.