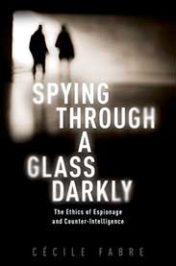 Spying Through a Glass Darkly: The Ethics of Espionage and Counter-Intelligence

As the Bible’s Book of Numbers tells the story (at 13:17ff), Moses sends out one man from each of the twelve tribes of Israel, with instructions to “go and spy the land” of Canaan. Caleb returns with the favourable news that Canaan is ripe for the taking; the others report that its fortified cities and strong population make it an impossible target. The Israelites decide not to invade the land. As a result, they incur the wrath of God and condemn themselves to wandering in the desert for 40 years—in possibly one of the earliest and most spectacular intelligence failures “on record.”

Ever since Moses, espionage has been an enduring tool of statecraft. As John Le Carré’s iconic character George Smiley vividly tells it,

Smiley’s description of the world of intelligence is not exactly a ringing endorsement of Le Carré’s own early career as a spy. Smiley and his creator are correct, of course, that governments—and private corporations—shall always spy. In fact, espionage is, at least sometimes, the morally right thing to do—more strongly still, it is a moral duty.

This might seem controversial. Yet, the military strategist and general Sun Tzu offers an unambiguously moral defence of espionage in his classic treatise The Art of War (6 BC). War is so costly to the sovereign’s soldiers and subjects, particularly his poorest subjects, that the sovereign is under an obligation to try and shorten it by acquiring knowledge of the enemy’s intentions and dispositions. Given that the only way to acquire such knowledge is by using spies, a sovereign who refuses to use spies is “completely devoid of humanity.” Closer to us in time, Thomas Hobbes tells us in On the Citizen (1642) that since

“princes are obliged by the law of nature to make every effort to secure the citizens’ safety; it follows not only that they are permitted to send out spies, maintain troops, build fortifications and to exact money for the purpose, but also that they may not do otherwise.”

Sun Tzu and Hobbes focus on rulers’ duty to their subjects and justify it by appealing to the safety and wellbeing of those rulers’ subjects. But there is another justification for it. When our leaders take our country into war, order targeted drone strikes on foreign targets, or impose economic sanctions, they run the risk of causing serious harm to the innocent. They do so on our behalf and in our name, and so owe it to us to minimise that risk, failing which we too, ordinary citizens, will be tarred with the brush of wrongdoing.

Our government also owes it to the targets of its harmful policies to ensure, as far as possible, that it acts on the basis of accurate information. Suppose that our government justifiably seeks to stymie another state’s Weapons of Mass Destruction (WMD) programme. That state has so far resisted all attempts to inspect its facilities and refused to engage in diplomatic negotiations. Our government concludes that a targeted strike on the building which contains the IT mainframe for the WMD programme would be a necessary, effective, and proportionate response. It has information from one source that the WMD mainframe is located in a particular building, and information from another source that the building hosts the mainframe for that other state’s healthcare system. Only spies located in situ can help our government ascertain what the site is.

Let us suppose that the site contains the mainframe for the healthcare system. If our government orders its bombing, thousands of patients who depend on the good functioning of the mainframe will be grievously harmed and civilian IT workers will be killed. If it orders the bombing without sending spies out to check even though it is in a position to do so, it will unnecessarily subject those individuals to the risk of being killed unwarrantedly. Deliberately killing the innocent grievously wrongs them; doing so when one did not need to do so is much worse.

Is this to say, then, that intelligence agencies and their operatives ought to be given a free moral run? That they can deceive, coerce, blackmail, and exploit their targets with impunity? That their paymasters too can deceive and launch conquests? Certainly not. Just as there are moral limits on war, so there are moral limits on what governments can legitimately ask Smiley and his people to do. The fact that those limits might be observed in the breach as well as (more than?) in the observance does not make them any less stringent. But nor does it absolve our government of its duty to spy.