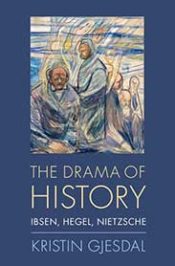 The Drama of History

Where does philosophy belong? In lecture halls, libraries, and campus offices? In town squares? In public life? One answer to this question, exceedingly popular from the Enlightenment onward, has been that philosophy belongs on stage—not in the sense that this is the only place we should find it, but that the relationship between philosophy and drama is particularly productive and promising.

Diderot, Voltaire, and Lessing refused to draw an absolute distinction between philosophy and drama—and excelled in both. Drama featured centrally in the works of nineteenth-century luminaries such as Hegel and Nietzsche. It should not surprise that modern dramaturges and directors drew on philosophy to formulate their views about the arts of drama and theater. It was in this intellectual climate that the Norwegian playwright Henrik Ibsen positioned himself in the 1850s and 1860s.

In Copenhagen, where Ibsen spent time during his apprentice years, the theater was dominated by the powerful Johan Ludvig Heiberg. Heiberg was a student of Hegel and the author of a number of Hegelian writings. Hegelianism prospered among the Scandinavian expats in Italy, where Ibsen spent a formative period. Hermann Hettner’s Hegelian treatise is described by Ibsen as “a manifesto and program for reform in the modern theater.” Later on, Nietzsche’s reflection on tragedy, history, and morality gained traction. We see Ibsen’s mentor Georg Brandes transition from a romantic to a Hegelian and, finally, a Nietzschean position. Lou Salomé, the author of the path-breaking Eroticism as well as an early monograph on Nietzsche, wrote an early study of Ibsen’s heroines.

When trying out ideas for a commission for the University of Oslo, the painter Edvard Munch sketched Ibsen with Nietzsche and Socrates. In Ibsen’s work, we encounter Sophists and Platonists. In Peer Gynt, the eccentric protagonist encounters a Hegelian director of a madhouse. Peer himself grandly converses about world history and logic. Works such as Hedda Gabler and An Enemy of the People put into play distinctively Nietzschean characters and address topics such as the relationship between life and learning, and the need for critical and existential approaches to history. The point is not that Ibsen, as a dramatist, passively drew on philosophical ideas, but that he allowed his characters to live out a set of worldviews, to test, as it were, their viability in the laboratory of individualized life. Ibsen actively transforms and challenges the philosophy of the nineteenth century. His drama does not make use of philosophy. It is philosophical. It is as such that it caught the attention of Freud, Adorno, Cavell, and others.

Ibsen wrote in a period when philosophy was in the process of becoming increasingly academic. Philosophy understood itself as scientific and, as such, sought to guard its boundaries towards the arts. This, however, did not prevent philosophers from thinking about drama: its status as an artform, its cultural function, the relationship between drama as written and as performed in the theater.

For Lessing and Herder, drama was the artform through which a historical culture would articulate itself. A dramaturg at the prestigious Hamburg theater, built to celebrate the city’s independence from the Danes, Lessing set the agenda for modern dramatic arts. Gone were the ideals of classicism. Modern drama cannot imitate the great tragedies and comedies of the ancients, but must put on stage the conflicts, contradictions, and experiences of modern life. With Herder, Shakespeare’s drama, featuring people of all classes, dialects, and worldviews, is put forth as a new paradigm. Here drama is freed from the distinction between high and low. It is, Herder argues, an art of the people. August Wilhelm Schlegel further developed this kind of thought. His lectures on drama launched a frontal attack on the formalist view of the purity of art and the autonomy of aesthetic judging. Following this lead, Hegel argued that drama explores the nature of human action—both in its ancient and in its modern forms. It is, at the end of the day, the highest stage of art. And even though Nietzsche was critical of Hegelian idealism, he continues its fascination with tragedy. For Nietzsche tragedy originally gave rise to the most profound metaphysical experience.

Nineteenth-century philosophy of drama is no doubt fascinating. It should not surprise that playwrights such as Ibsen found such discussions fertile ground for dramatic content and reflections on the nature and politics of drama.

Yet, at some point, the budding dramatist would have been disappointed. For Hegel philosophical thinking was ultimately assigned priority over artistic form. While historically important, art represented an incomplete stage in spirit’s cultural-educational development. Nietzsche, on his side, prioritized the mythological, rhythmic, and musical dimension of tragedy over characters and actors.

For modern dramatists, by contrast, no such limitations apply. Instead, it is philosophy, with its abstractions and theorizing, that falls short. As such, it is fitting that Ibsen would present the (Hegelian) philosopher as the director of a madhouse or the (Nietzschean) philosopher-historian as being drawn to the lethal mix of alcohol, unhappy love, and loaded pistols (Hedda Gabler).

Ibsen is not committed to a particular position or point of view. He hones in on the existential dimensions and consequences of positions and worldviews that would otherwise remain theoretical and academic. He engages philosophical ideas from the point of view of lived life. He takes these ideas as far as life can hold them and then puts them into focus as they burst and fall apart.

Academic philosophy is sometimes hostile towards the idea that philosophy can take artistic or non-academic forms. But to the extent that philosophy is committed to the examined life, we will, as philosophers, be poorer if we leave out the quests for truth and understanding that drama, in Ibsen’s vein, embodies.