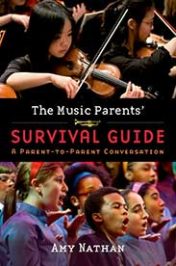 “Our teachers and students and families are so excited to be back, to see everyone again,” said Brandon Tesh, director of the Third Street Music School in New York City. His school resumed in-person classes in September 2021 after 18 months of online instruction, caused by government-ordered school shutdowns aimed at slowing the spread of the COVID-19 virus. Other music schools and music programs also resumed in-person instruction last fall, but in early January 2022, his school and others had to switch back to online learning for a while because of an upsurge in COVID infections in their cities. His school was back in-person by mid-January, although with enhanced COVID testing options and additional safety measures in place.

“We are rolling with the punches, making music and keeping our students active,” said Rebecca Henry, string department co-chair at Peabody Preparatory, which also reverted to virtual learning in January. “We had to cancel our big January Performance Academy Festival Orchestra and are trying to re-schedule to February.” Nick Skinner reports that his OrchKids program, which provides free music instruction for more than 1,900 students in Baltimore’s public schools, “has developed virtual and modified in-person plans for all our sites so we can be flexible week to week based on COVID testing at each school,” shifting back to virtual whenever needed.

These educators and their students have become experts at pivoting quickly, a skill they had to master as the pandemic started in March 2020, when they suddenly had to learn to use Zoom and other video-conferencing programs along with apps for recording music so students could continue to interact with their teachers and create virtual performances.

After in-person instruction resumed at many schools last September—albeit with mask and social-distancing precautions making the learning experience far different than pre-pandemic—one might imagine that students and teachers would have gladly waved goodbye to the online tools they used during the shutdown. But many educators kept using some virtual tools last fall, as part of their in-person toolkit because they felt those techniques enhanced the learning experience, providing surprising silver linings to the shutdown ordeal.

“One of the best silver linings is Zoom. It changed everything we do,” said Nick Skinner, Senior Director of OrchKids. He and others have found that Zoom is a great tool for holding faculty meetings, professional development workshops, and get-togethers with parents, eliminating travel time for everyone as people simply connect with each other from home.

Because of video conferencing, “we were able to start planning collectively,” said Jessica Zweig, Program Director for Play on Philly, a free after-school program for more than 300 students who meet at five different centers in Philadelphia. Before, it had always been hard to bring all the teachers together from the program’s different sites for meetings, but now Zweig reports that teachers “are getting together in virtual meetings every two weeks to find ways of creating consistency and continuity among our teaching strategies.”

The shutdown also had an impact on the OrchKids curriculum. For the first time they offered a weekly private online lesson to all students who were able to connect with them virtually. That was totally different than the teaching strategy they had been using—the El Sistema group-playing approach. “We saw that there’s nothing that can compare with the mentorship of one-on-one instruction,” said Skinner. “We’ll still do group lessons for younger students who are just starting. But we’re thinking of bringing private lessons more into the program as students progress.”

“We will use Zoom lessons for snow days and make-up lessons,” said Rebecca Henry, string department co-chair at Peabody Preparatory. “We will include some online repertoire classes for students who cannot always be at our in-person events.” Peabody and others are allowing some students who aren’t comfortable returning to in-person instruction to have virtual lessons instead.

Another silver lining that was popular with the educators we spoke with was the chance to bring in professional musicians during the shutdown to meet with students in virtual master classes and workshops “at a fraction of the expense,” said Skinner. There’s no need to cover airfare and hotel costs with virtual gatherings. He and the others plan to continue these virtual visits. “We’ve upped some of our equipment and our technical know-how,” noted Tesh, “so that digital master classes can be really good quality. We will also be live-streaming more of our performances because we’re limiting capacity at our in-person performances,” a process that started last spring with this video of an in-person performance that took place when New York City began allowing outdoor concerts on certain streets.

Zweig’s program commissioned composers to create new pieces for Play on Philly students. Iranian-Canadian composer Dr. Iman Habibi wrote a piece that “the kids learned virtually by themselves. We did individual recordings and put it together. He was able to give them feedback from Canada.” Now Play on Philly is commissioning composers to write new pieces that are appropriate for beginners but that are “written by people who are reflective of the kids who are playing them.”

Online group performance projects sparked a lot of student creativity. OrchKids had always offered collective composition workshops in which students would improvise together around a theme to create a new piece, which they would then perform in a concert. “We found another way in the virtual space,” said Skinner. “Students would each record themselves playing their own stuff and send it in. We hired a producer to weave it all together and create a track. The kids were so free with their recordings.” In addition, a piece created during a live in-person performance “doesn’t live much past the concert. With the virtual workshop, we have the video that can keep being enjoyed.” They also used this approach to record different student groups performing when COVID concerns prevented the holding of a winter concert in December, as did Play on Philly.

Rebecca Henry was impressed with the creativity students showed in their online concerts during the shutdown, as they added “art, poetry and improvisations to stories that had more variety than our usual concerts. We will look for similar opportunities going forward.” So will Katrina Wreede, whose high school students put together a multimedia piece about water, adding their own photos to go with the music—one of the many creative projects in the Young Musicians Program that she coordinates and teaches in at the San Francisco Community Music Center. She is encouraging her students to keep developing the recording skills they learned during the pandemic and “create something and put it out into the world on YouTube. Some students did a project on their own this year. They created a video for new kids who came into the group, with tips on how to practice and other helpful things. It was so welcoming.”

Wreede also explored musical recordings on YouTube with students during the shutdown, doing more listening and analysis with them than she had before. So did Henry. Both hope to blend this into their in-person teaching. Both also noted another benefit of their weekly online lessons with students—they were important for the students’ well-being, creating “a safe place of peace, creativity, and music-making,” said Wreede. Henry added that the isolation caused by the shutdown was especially hard on teens. “Our weekly connections were more personal than before, as we all navigated the meaning of making music.”

Amy Nathan is an award winning author of several books on music including The Music Parents’ Survival Guide: A Parent-to-Parent Conversation, and two earlier books for young people, The Young Musician’s Survival Guide: Tips From Teens and Pros and Meet the Musicians: From Prodigy (or Not) to Pro. Her newest book—Making Time for Making Music—is for and about amateur musicians. She is the mother of two musical sons: one a composer and the other a saxophone-playing political scientist.

Technology in the elementary music classroom after the pandemic