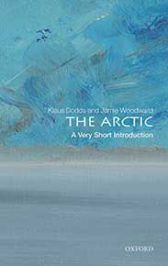 The Arctic: A Very Short Introduction

In October 2021, the British Antarctic Survey launched a new immersive exhibition called Polar Zero in the city of Glasgow to coincide with the COP26 conference between 1 and 12 November. The ice-covered poles have been used repeatedly to convey the urgency of the climate emergency. Melting ice, thawing permafrost, and retreating glaciers are very visible reminders of what is happening on our warming Earth. The exhibition features an Antarctic ice core containing trapped ice bubbles dating from 1765—a moment before the onset of the industrial and urban revolution that transformed human life and the carbon cycle.

In 1765, a German theologian and missionary David Cranz published his Historie von Grönland, which described the natural and cultural life he encountered on the island during a year-long stay. The Arctic he encountered was being subjected to ever greater external scrutiny and interest. The quest for a Northwest Passage was popular with national and commercial sponsors alike. In the 1770s, the Hudson’s Bay Company was sponsoring Samuel Hearne to travel to northern Canada and discover an ice-free passage to Asia. Arctic whaling was well established by the 18th century with Dutch and other European ships harvesting whales off Greenland and Svalbard. Mining and smelting were already part and parcel of life in northern Sweden with mines operating in the 17th century. Well before 1765, therefore, the Arctic’s rich resources—actual and potential—were being realised.

This view of the Arctic as a resource storehouse sits uneasily with the experiences of the indigenous communities who call the far north home. In today’s Arctic about 1 million people are indigenous in origin and many of those communities have had direct experiences of resource projects and settler colonialism. In the 19th and 20th centuries, resource exploitation expanded to take on a raft of objects from oil and coal to opportunistic discoveries of mammoth ivory. Across the Arctic, national governments, military engineers, and commercial enterprises built a network of roads, pipelines, ports, airports, and other forms of infrastructure. Cold War tensions and the oil crises of the 1970s added further impetus for this push for exploitation and development.

A paper published in Nature in 2005 referred to an “Arctic paradox.” It drew attention to the fact that the Arctic was a pollution sink whereby human and animal communities were on the receiving end of environmental change originating elsewhere. In the 1980s and 1990s, attention was often drawn to the problem of airborne pollution and “acid rain” rather than global climate change. Indigenous groups, including the Inuit, criticised this widespread tendency to represent the Arctic as a pristine wilderness. This not only mis-read the Arctic’s historical experiences of exploitation and degradation by outsiders, but also under-estimated the damage being done by global flows of airborne pollutants in the 20th century. In 2005, Shelia Watt-Cloutier was Chair of the Inuit Circumpolar Conference and she filed a petition to the Inter-American Commission on Human Rights (IACHR) highlighting the harmful impact of climate change caused by the United States.

The Arctic is warming much more rapidly than the global average (Figure 1). This tension between the Arctic being in the frontline of climate change and the continued desire amongst some Arctic states such as Canada, Russia, and Norway to extract oil, gas, and coal epitomises this paradox. Indigenous and northern communities can benefit directly from fossil fuel extraction and mining even if they appreciate only too well in their daily lives the costs of climate change. What does aggravate, however, is when communities are neither consulted nor benefit from revenue streams associated with mining. For the last four or five decades, indigenous communities such as the Iñupiat in Alaska have become notable land and resource rights holders via the 1972 Alaska Native Claims Settlement Act.

Climate warming is driving permafrost thaw, sea ice loss, and ecological change across the Arctic. Just before COP26, an EU policy paper for the Arctic published in October 2021 called for oil, coal, and gas in the Arctic to stay in the ground in the name of addressing the climate emergency. Well intentioned? Possibly. But the EU is heavily dependent on Russian gas supplies from the far north and no EU state has substantial Arctic-based resource potential. Campaigning to “save” the Arctic can lead to the worst kind of virtue signalling and indigenous groups are very critical of what they think of as green colonialism. Petro-states such as Canada, Norway, and Russia are deeply invested in oil and gas extraction (Figure 2).

Extracting further hydrocarbons makes no sense in a region that is experiencing warming three times higher than the global average. But what makes sense in Brussels and Paris may not make sense in the eight Arctic states since such directives commonly ignore the interests and wishes of indigenous communities. Whatever happens, as Arctic landscapes warm and thaw, CO2 and methane won’t stay in the ground, wildfires will raze trees to the ground, and infrastructure will collapse into the ground.

In our work we have explored the changing environment and explained why the Arctic is caught up in a series of conflicting pressures. The Arctic is now exceeding climate change predictions by decades—it features prominently in the Sixth IPCC Assessment Report (AR6) of the IPCC due in 2022, especially in relation to climate change impacts, adaptation, and vulnerability relating to the people of the Arctic. A vast human-induced experiment in rapid climate and ecological change is playing out at the top of the world. These environmental changes have consequences for all of us.