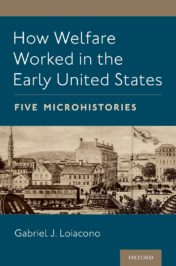 How Welfare Worked in the Early United States

Once or twice a year, I spend the semester with 50 college sophomores pondering two questions. The first one is: how have people in the past cared for the neediest people in their community? The second is: how should we?

In this General Education requirement course, second-year students are expected to study a subject in the typical academic way while also studying it through a form of service learning. My university calls this a “community experience.” Last year, students spent part of their semester in a local food pantry, or a local charity shop, or helping to overcome COVID-19 isolation by talking on the phone with residents of local subsidized housing units.

At the food pantry and the charity shop, students do everything from sorting donations to selling them to clients. The subsidized housing project was new last year in response to the effects of our self-isolation to combat COVID-19. Residents of subsidized housing were unable to congregate in social spaces in their buildings or go to many places they used to. My students signed up for weekly phone calls with a “virtual buddy.” It went better than I expected. Some “buddies” said this call was their one voice conversation per week. Students working with all three groups learned a great deal about people’s needs in their own town.

At the same time, we answer the first question with examples ranging from the ancient Mediterranean world to medieval England to the twentieth-century USA. This class was a stretch for me, an historian of colonial North America and the early United States. But with the help of a medievalist colleague and a community experience specialist, it has come to work well. For me, teaching a broader history of charity, poor relief, and poverty has really helped my research in early American poor relief. My students get a class that covers much of the ground of a survey, but with a deep dive into social history that many tell me they have never seen before.

Through blog posts, students also tell me how they think we should best care for the needy of our community. Having seen a wide array of examples from the historical record and having helped to care for those in need themselves, they often have sophisticated and thoughtful answers to this question. Their answers generally range from a very carefully limited government poor relief to a very full provision of government poor relief. Their answers also continuously challenge me to think about what my answer would be.

While I am not an expert in today’s constellation of government, private, and mixed government/private poor relief, I do know a lot about how poor relief worked in the early USA. And there is one idea from this period that I think was really effective: local governments paying local people to help their neighbors.

It is astonishing to discover how many local women and men got cash from their town treasurer in exchange for things they provided their neediest neighbors. Much like English people working with the Elizabethan Poor Law, early Americans might give anything from room and board, to firewood, to groceries, to nursing care, to a proper burial. And for this, the overseers of the poor (a locally elected position) would direct the town treasurer (another locally elected position) to give dollars to the provider. For most of these providers, the town cash was a small addition to their household income. For some, it was a mainstay.

One such provider was called “One-Eyed” Sarah. She lived in and around Providence, Rhode Island in the early nineteenth century. An Indigenous woman, she was credited with saving the lives of patients who were both desperately ill and too poor to afford healthcare. Clearly skilled, it helped both her and her patients that she was reimbursed by the town treasurer, at the direction of an overseer of the poor. This reimbursal allowed Sarah to give full-time, strenuous, attentive nursing to people who needed it but could not afford it. It also allowed her to bring cash into her household, to buy real estate, and to protect her own children from the most difficult working environments.

I have many questions about “One-Eyed” Sarah, despite years of research. I still don’t know her last name, for certain, or which Indigenous nation she was a part of. Her work came to light, though, in an 1811 series of newspaper articles. Reading these combative articles more than 200 years later, one thing really jumps out at me: the authors argued about almost everything except whether government poor relief was a good idea. Instead, they focused on whether government poor relief was being delivered humanely. Since I live in an era when government poor relief—or “welfare”—is a politically divisive idea, I found it interesting how little it seemed to divide politically engaged Rhode Islanders in 1811. I’ve come to the conclusion that local governments paying local residents to help their neighbors was a big part of why welfare was uncontroversial at the time. Welfare made lots of locals happy.

My students and I still don’t have a single, definite answer to how we should care for the neediest people. But I often wonder whether local funds given to local providers of care, like “One-Eyed” Sarah, should not be a bigger part of our answer.

Featured image by congerdesign via Pixabay

Gabriel Loiacono teaches history at the University of Wisconsin Oshkosh. He's the author of How Welfare Worked in the Early United States: Five Microhistories (Oxford, 2021).