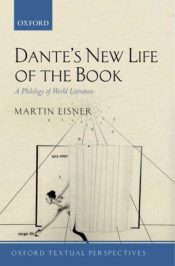 Dante's New Life of the Book

2021 sees the 700th anniversary of the death of poet Dante Alighieri. To mark this, we asked authors of some of our new publishing on Dante to write for the OUPblog.

For over 700 years, Dante’s description of his first encounter with Beatrice has scandalized readers. Medieval commentators debate Dante’s possible blasphemy in glorifying a mortal woman. Counter-reformation editors censor it. Some modern interpreters see it as a theological or political allegory without biographical foundation, while others consider it an idealized modern reciprocal romance. In Dante’s New Life of the Book, I examine how these various responses from Giovanni Boccaccio to Orhan Pamuk bring into focus the novelty of Dante’s Beatrice, who creates a connection to the divine that includes not only Beatrice, but all humans. Beatrice embodies Dante’s optimistic sense of human potentiality that provides the philosophical ground for the rewards and punishments of the Divine Comedy.

How Dante establishes this union of the fleshly and the divine has remained something of a mystery. “It appears likely, to anyone who reads the Vita Nuova without prejudice,” T. S. Eliot writes, “that it is a mixture of biography and allegory; but a mixture according to a recipe not available to the modern mind.” For centuries, scholars have tried to identify the conceptual basis for this combination. In the 14th century, Benvenuto da Imola called it allegory. In the 20th century, Erich Auerbach excavated the medieval term “figura.” These rhetorical and interpretive models do not, however, touch the ground on which Dante constructs his idea of Beatrice, which significantly builds on a quotation from Homer. Beatrice, Dante says, “was of such laudable and noble bearing that Homer’s words could surely be applied to her: ‘She seemed the daughter not of a mortal man, but of a god.’”

Modern readers since at least the 18th century have often assumed the Homeric passage describes Helen, the paragon of classical beauty, but Dante did not know the Homeric text directly. His knowledge of this Homeric passage derives instead from Aristotle’s Ethics where the Greek philosopher quotes Homer’s description of Hector as “not the son of a mortal, but of the gods.” For Aristotle, Homer’s Hector exemplifies the “superhuman virtue, a heroic and divine kind of virtue” that he contrasts to bestial degradation, just as he balances vice to virtue and incontinence to continence. With remarkable daring, Dante transforms Aristotle’s Homeric example of Hector’s heroic virtue into an eight-year-old Florentine girl, Beatrice. It is hard to imagine a better example of the Christian democratization of salvation that Peter Brown has identified. Making the Homeric hero into a Florentine girl, Dante expands access to the possibility of divination that Aristotle describes.

Because Dante remains identified in the modern imagination with infernal punishments, the positive impulse that guides his work is often forgotten. But Dante does not forget. When Virgil explains the logic of Hell’s structure, he reminds Dante of the same paragraph from Aristotle: “Don’t you remember those words with which your Ethics treats the three inclinations that Heaven rejects: incontinence, malice, and mad bestiality?” Commentators usually debate how these three terms map onto the terrain of hell without mentioning the complementary optimism that Aristotle expresses in it. Seeing the link to Beatrice’s glorification sheds new light on the motivations that shape Dante’s Hell, which is formed by the hope of salvation. Dante weeps not only at the suffering of the damned, but also their failure to fulfill this potential connection to divinity.

When a powerful institution talks about Hell, it wants to achieve social control. When the displaced poet devises Hell, he wants to imagine the justice that is missing from his lived experience. Dante’s exile may have fostered his concerns for non-Christian figures that Teodolinda Barolini has underlined, which includes both the virtuous pagans of antiquity, who are distant in time, and the man born on the banks of the Indus, who is distant in space. Although justice would not be served if all were saved, Dante’s vision of human is wider and more varied than is often thought. Punishing not only personal and political enemies, but also friends and teachers, Dante aims to restore justice.

Beatrice is not the singular, exclusive child of God. She represents all humans, whose souls God breathes directly into them (Purgatory, canto 25). Coming from God, all can return to God, fulfilling the circuit expressed in the appropriately palindromic English word “deified”: to be made into a god. Recent attempts to think about the “secular” show the radical strangeness of Dante’s vision of love. For these scholars, Dante’s vision of the Empyrean “obliterates” his love for Beatrice, which “gets leveled by the bliss of contemplating God.” These interpretations miss the collectivity of Dante’s vision. Individuals do not lose their identities as they become part of a greater whole. As Dante explains of the eagle in the heaven of Jupiter, or Justice, whose aquiline form is made up of many souls, whenever the eagle says “I” and “mine” it means “we” and “our.” Joining his love of a mortal woman with his love of God, Dante expands his vision to encompass other individuals as well. You may worry that Dante has put too much on the shoulders of an eight-year-old girl, but the real scandal of Dante’s Beatrice is that Dante thinks you can be Beatrice, too.

Martin Eisner is Professor of Italian and Chair of Romance Studies at Duke University. He is the author of Boccaccio and the Invention of Italian Literature (Cambridge, 2013) and Boccaccio: A Life in Books (Reaktion Books, forthcoming).

Eisner is the author of Dante's New Life of the Book: A Philology of World Literature (Oxford, 2021).